FP4: The specs and your opinions

Welcome to the forum

if you are thinking economically (and it seems you do), calculate this way: the 579€ with a five year warranty costs 116€ per year.
Assuming that after three years you might need to replace a non-repairable phone, compare the technical qualities of the Fairphone 4 with another smartphone that costs around 350€. It could be difficult to get a comparable phone in this price range.

Thing is, if you want to do 5 years with the smartphone you’re going to end up with 3 batteries in total, and probably also the 8/256 GB RAM/storage version. Because in a few years, that’s what is the standard.

So you need to compare the more expensive version, and then compare it with say 2 smartphones of about 350 EUR (one now, and one in 2,5 years). The second one is going to have vastly better specs.

I don’t think I’d be able to do 5 years with any smartphone, but what could happen is using it for 2 or 3 years and then it has resell value.

Things I don’t care about (now or in 5 years)

Either way right now my FP3 is still suffice. I do miss a hardware keyboard on smartphones in general. Maybe its better for me to skip the FP4, as I wouldn’t miss 5G for the next 2 years.

The A-series is Samsung’s mid-end line-up!

If you assume Fairphone 4 competes with the latter, the Fairphone tax is only about 125 EUR or one year of smartphone usage. If you can handle 1 more year with the FP4 than you’d normally do with your smartphone, you’re playing quite, money-wise.

If you assume Fairphone 4 competes with the latter, the Fairphone tax is only about 125 EUR or one year of smartphone usage.

You do get more from Samsung for that money. I’m not saying people should buy it. Just stating that you should take in more info into account when comparing these phones.

It also has a better SoC, with WiFi-6. AMOLED screen with 120Hz, more cameras, etc.

True (and I like the AMOLED/120 Hz feature as I mentioned), there’s also some differences between the cameras. It also has IP67 rating, instead of IP54. But the one you linked isn’t the 8/256 model though.

Still, looking at how slow these Samsung devices get updates, and given its a big corporation, I think Fairphone did rather well.

It also has a better SoC

No, the SoC is the very same.

You do get more from Samsung for that money.

Not more fair trade, just more unfair trade, given the lack of replaceable parts and longevity which adds to the human cost.

Thing is, if you want to do 5 years with the smartphone you’re going to end up with 3 batteries in total, and probably also the 8/256 GB RAM/storage version. Because in a few years, that’s what is the standard.

The low spec is fine. My old Samsung Alpha works fine, but has no SD card and no wifi calling. But yes add the cost of the batteries.

Saying that the Alpha’s batteries still working since 2014 and 32Gb, most unused. Android 5.0.2

But it has problems with both the USB port and the earphone jack.

True. I’m happy with my Pixel 3. I think phones have more or less reached a peak by now (in terms of hardware). Sure, there are improvements. But they’re so incremental and small, or that they invent new trends, like notches, to sell something new. I’m fine with a new phone around the specs of a Pixel 3. I guess the Fairphone 4 is around those lines. We’ll see

AI stuff to improve camera quality and the smarts of a phone are I guess the next best thing to improve phones. That’s a battle Fairphone will have some issues with.

Performance requirements in 2-5 years is going to depend on market trends. E.g. big applications which get popular. And they’re almost guaranteed to be bloated. Market demand != individual demand.

Android 5.0.2 is begging to get hacked. I think that even has Stagefright bug. You’re free to use that, but it isn’t arguing your case… at all…

The Alpha is a phone, a camera and a media player, not really a security issue.

There were a few ‘viruses’ around in the late 90s but seen nothing since on my Windows, Ubuntu, Raspberry Pi and various Androids. I don’t use a phone for banking or answering emails, for that I use a PC.

Anyone who has your phone number can remotely pwn it via SMS. They have root on a computer more powerful than anything consumers used in 90s. From there they have access to your WLAN network. If you use WPA-PSK, they got your PSK key, and can actually decrypt all of the traffic you use on other devices. But yeah, ‘none of that matters’. I work in this industry. This matters. Its also part of reason why we got e-waste in the first place.

Apart from the lack of clarity with ‘pwn’ people have my phone number no matter which phone or OS etc. I use.

So someone has a powerful computer and my telephone number, doesn’t seem a security risk that isn’t common to everyone.

From there they have access to your WLAN network.

So it seems you are correct ‘none of that matters’.

What Jeroen means is that there are vulnerabilities in software that can be exploited, especially on devices that are behind with updates. Specially crafted text messages can install spyware on your phone. That’s why software updates are so important. Not just apps or your OS, but also the firmware of your hardware. In the monthly security fixes of my Pixel 3 there are always a number of Qualcomm security fixes for my GSM/WiFi/Bluetooth radio driver. It’s best to just stay up to date on the latest patches, even if you don’t use any of these functions. They might be exploited one way or another.

Specially crafted text messages can install spyware on your phone

Well I am dumb safe as a) I don’t accept text messages from unknown sources and b) I don’t accept any media files even from friends and c) I don’t think my family have got it them to try and hack me…
The closest I get to social media is this forum and my websites are self hosted and I’m sure there’s little in me to be scammed that’s worth the effort.

But this is all a bit off topic my reference to an old Android 5 was related to the issue of weight of the phone and basic usability, which is all I want from a phone, with SD card, jack socket and wifi calling when at home as I have no network.

Security seems a little overrated when I’m at the low end of the food chain. There are far bigger fish to fry but if they want a carrot they will have to hack the rabbits.

These kind of attacks are rarely targeted. They just throw out a fishnet and catch whatever they can. You’re assuming that your phone doesn’t do anything with a text message because you configured something that you only receive it from contacts? That text message is coming in and is processed. So if the vulnerability is in a layer where the text is received before your software discards it, then that won’t work for you. And this is just one example.

If you run outdated software you’re more vulnerable. By thinking you can outsmart the world by disabling certain things, that might make it even more dangerous. Because then you’re not aware of what is actually the problem. I hope your self-hosted websites are maintained with a better healthier paranoia

Thanks for the addendums.

@amoun, read carefully what I wrote:

Pwn means own (have root access on). So its not a matter of keeping your phone number secret. Its that anyone can craft such a message (without requiring a powerful computer) to get full access on your smartphone, including access to enabling WLAN, following your GPS tracks, etc. There’s even malware which hides itself from the user, or is destroyed upon a reboot (but with the vulnerability remaining that’s a clever hiding feature). Besides, on Android (and nowadays even iOS) WLAN/BT off does not always really mean off.

And yes, we didn’t even discuss all the baseband/BT/WLAN firmware updates you and other people who ‘try to use their device as long as possible’ are lacking.

Furthermore, my problem with your post isn’t that you decide that you want this for you. Its that you share your bad security practice here, boast about it, and recommend others to follow suit.

I recommend you look into the issues of Internet of Things. Because the issues with that are similar to the one we discuss here.

There was no boasting just a matter of fact about an old phone I have that weights half that FP4 and functions as a phone, media player and camera and a jack for headphones.

Where do I suggest that ?

You are distorting and misrepresenting my text to suit your concerns.

My Android 5, as I have stated doesn’t use BT or WLAN so where’s this security threat coming from and what is it?

However the question is a bit rhetorical I don’t really want to know nor do I care. This is about the FP4 specs, and my post was about the weight and the earphone socket. That I provide specs on the phone was to help clarify how old it was, but useable with 32Gb RAM memory

There was no boasting just a matter of fact about an old phone I have that weights half that FP4 and functions as a phone, media player and camera and a jack for headphones.

Except it doesn’t function, as it is insecure. It is boasting for the reason I outlined above: the smartphone isn’t secure, at all. Neither is a Fairphone 1 or a Fairphone 2 with stock firmware, FWIW (FP2 does not have Stagefright though, but different issues). Using these devices isn’t clever use of old hardware. Its dangerous, and suggesting others do the same is the same: dangerous advice. Dishonest as well, while I’m at it.

Qcom is partly to blame here, for sure. Yet a company like Fairphone sticks w/them. Their most popular competitor, Mediatek (Mtk) is even worse though. If you go with something like a Librem 5 you end up with a much less powerful device. With hardware killswitches though, so you can be sure WLAN off means WLAN off (same with BT). You, with your Galaxy Alpha, cannot be sure of such.

but useable with 32Gb RAM.

However the question is a bit rhetorical I don’t really want to know nor do I care.

You really do not know what you are talking about when it comes to security of devices. I already told you: I work in this field. Your reponse when I told you about vulnerabilities in your device:

stay ignorant for all I care, but please don’t advise others when it comes to device security…

Here you go again pushing your fabrications of what you say I said. Maybe you could quote your rude assertions.?

So you have a problem with me using an old phone? Really? 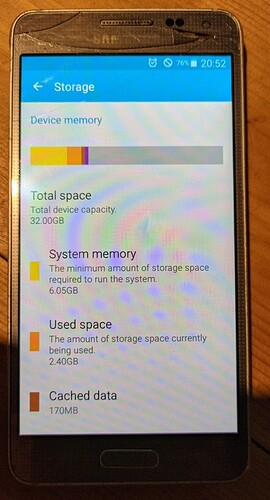