My new FP4 dual charger broke incredibly easily. The charger fell from my nightstand causing the end of the 18w charger to break off completely (see picture), has this happened with others? Seems like that if you are trying to make durable / sustainable stuff it needs to be a bit more robust than this should it not? 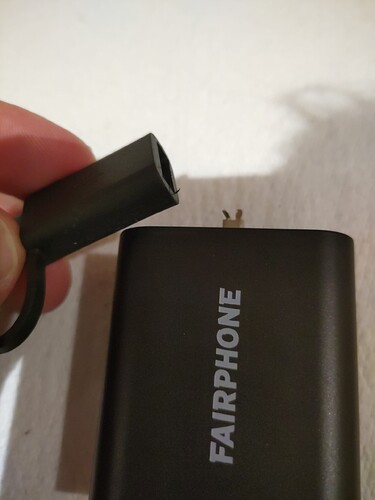 Everything can break, if not used in a correct way.
But what exactly broke? Looks like the cable, not the charger.

Looking at the chargers the e at the end of the charger is attached to the plug so it isn’t clear from the image what is broken. Maybe the word Fairphone is the other direction on the other side??

For example incanus thought it may be the cable and the part held in your hand doesn’t look like the plug, which seems a bit difficult to break off.

So is it the end of the cable? It really isn’t clear

I would #contactsupport and ask for a replacement as that clearly shouldn’t happen. I hope they’ll just let you keep the broken one as well, since that USB C plug still should be fine. No need to produce more e-waste.

Hello ! I had the excact same issue. Twice.
My first cable broke after about 5 weeks of use. I brought it back to the store (still waiting for a refund/replacement). I bought a new one less than 2 weeks ago and it just broke in the exact same way than the 1st one even though I was being extra careful.
There is definitely an issue with this cable…

Can you confirm which of the three cables you had this problem with?

Looking for Fairphone accessories? We have a collection of cover, chargers and more available directly in our online shop.

This durable cable is reinforced with braided, 100% recycled polyester and comes with a versatile USB-A adapter for all your charging, syncing and data-transfer needs. The Fairphone USB-C 2.0 Charging Cable is reinforced with braided, 100% recycled nylon for enhanced durability. It meets USB 2.0 standards and is designed to last, making it a reliable solution for charging and syncing. Cable length...

Hello and thanks for the fast answer ! I just checked and it’s the 1st one of your list USB C 2.0 which can be connected to USB A or C

Have a lovely evening

So which bit broke ? One of the plugs that went into the charger, was it the adapter to USB A or the fitted USBC, or was the other end with only the USBC?

A picture speaks a thousand words

Sorry I don’t have a picture !!

So, it is the whole Usb A metal part that fell out of the black “rubber” part that was containing it. I tried to glu it back in but it didn’t work.

Thanks.
If you have the ‘first’ one that has the adapter then the cable is still usable for USBC to USBC.

It is hard to imagine the metal part fell out unless it was only help in by a millimeter. So I’m trying to imagine what happened. You used the USB A adapter rather than the USB C and when you pulled it out the metal part was left in the charger.

It is surprising that the metal was not attached to the surround well enough to be pulled out a thousand times ???

Yes, exactly, so i charge my phone with this cable in a charger through USB A. I did not even pull the cable out of the charger. I was just charging the phone and I think that everytime the cable wasn’t 100% straight it loosened the USB A part a bit, which ended up falling out after a few uses.
With the first charger I thought i had maybe pulled too much or sth, so I was super careful with the new one, not using the phone while charging etc, but it broke even faster.

That’s more than a little odd. Apart from Fairphone sending you a new cable, again, then maybe they can send you a bag of adapters. I know that’s not really funny, but if the cable is OK they ideally would have an option to replace the adapter ~ given the sustainabilty blurb I read

I have had the same problem. See the attached picture.
I contacted Support and asked for a replacement but no answer yet. 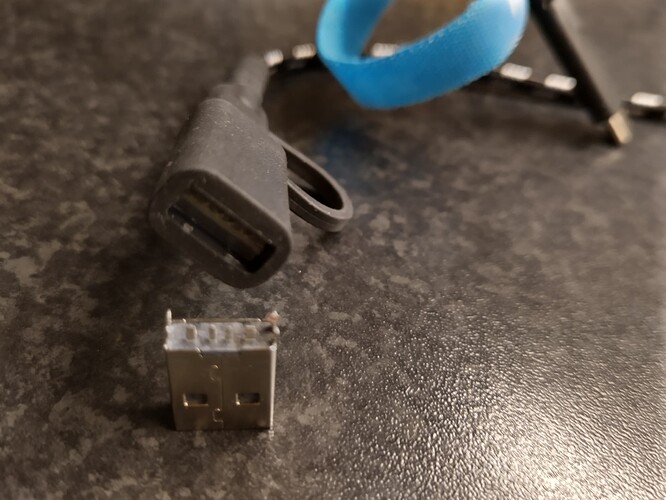 Thanks for the really informative image. Hopefully you are aware that it is guaranteed for 2 years so you should be able to get a replacement.

It seems an unusual failure and I do consider it crazy a design fault even though 99% may be OK. Though without asking Fairphone there is the question of how many they sold.

Hope it’s not that it may be made of recycled plastic which doesn’t grip the USB A part well enough.

Hope you get another quickly or get the money back and buy an alternative.

Still in theory you only need a USB C male to USB A female adapter. Looks like Fairphone could do with a stock of those, after all the rest of the cable may be OK for ages.

Further, I hope those that have experienced this weren’t pulling on the cable to remove it.

A firm grip on the molded cover would help prevent this.

Update:
It is a known issue and Fairphone works on an improved one.
I got three options to solve the problem:

Same problem, We bought two Fairphone 4s in April. In the last two weeks, the USB connector has detached, and no longer works. 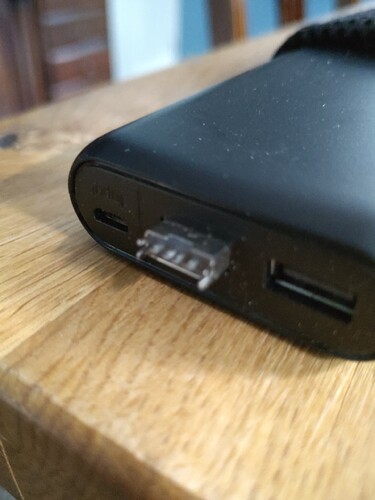 USB connector stuck in portable charger1920×2560 167 KB
Like others, I’m surprised and disappointed - I was so pleased with the covered cable, thinking the charger as a whole woul dbe very durable. I haven’t contact Fairphone yet but will do.
system Closed February 1, 2023, 5:16pm #18