So I thought it could be interesting to start a thread dedicated to sharing our experience with battery life on fairphone 4.

I don’t really know if this is bad or…average ?
I mainly used my device for WhatsApp, Reddit browsing, of course fairphone forum reading and some tweaking.

I have naptime with default setting installed as well as servicely and disabled developper option “keep mobile data on when connected to wifi”.
The latest option was only enabled at 50% when I realized “Standby mobile data” usage was a bit high. I suspect it’s related to low coverage upstairs at home which probably makes the devices actively search for reliable signal more than required. But this remains to prove.

Edit:
If someone has an idea how to explain quickstep launcher being counted as 40 min use, it doesn’t really make sense as I don’t spend time on my launcher…

1.5 days, what a dream for FP2 user😉To compare it might be interesting to know how much degoogled the device is?

As much de-googled as possible

That’s impressive, how many SOT ?

Another day without charging… 32% left

Disabled all google apps except Playservices ans Dialer (because of conference calling, not possible with simple dialer)
only personalDNSfilter. no other block services,

Interesting, I tried to remove as much as possible but still could not find an acceptable replacement for maps nor a cloud client that would handle drive properly.

how do you define “acceptable replacement for Maps”? I use Magic Earth (default maps app coming with e/OS), because it has traffic information. My apologies if this is a stupid question, but is drive not the google cloud client (or at least one part of it)? So not sure what you mean be cloud handling drive? So there are other cloud clients like Mega Cloud that can be used instead of Google Drive or Dropbox. Also better from a data protection perspective should be Tresorit and Luckycloud (not tested myself).

I feel as though the battery on this phone is very adequate. 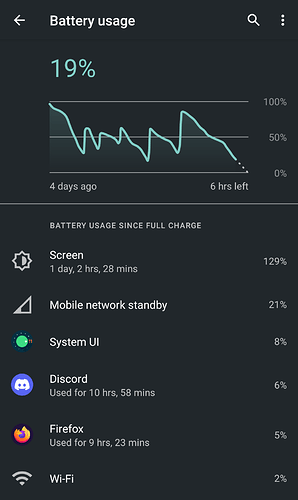 It’s not bad. But my Pixel 3 has a ~2900mAh battery with a battery health of 75% after 3 years. The Pixel doesn’t last that long compared to the FP4 which has 1/4th extra battery capacity. But when it had 100% capacity it came close. So in other words it could still improve software-wise. Or maybe it’s because it has an LCD screen. 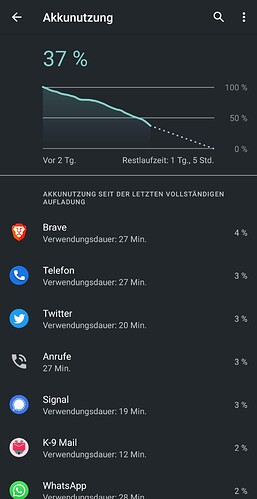 Pretty much comparable to @FairphoneHulk’s battery statistics but I was quite conservative with degoogling to avoid anything breaking:

Besides that, I deactivated the play store and the default messaging app.

Although I don’t use a Google account, I still run on the default launcher. I may change that in the future but haven’t seen the need yet. What do you think? Any room for improvement?

That looks pretty good as well. Though I understand just as FairphoneHulk, you’re not a heavy user, 2h SOT over 2 days is very… low usage

However, it does show very low consumption while idle.
My device is draining 4% overnight. I did not disable bluetooth, I think I’ll give it a try and see if it ends up improving idle battery consumption.

I usually switch to airplane mode over night. And yeah, the battery drains awfully fast with more SOT. LED displays are just not known for being top energy savers.

I was able to replace most of Maps’ functionality with OsmAnd~ and NUNAV Navigation. While I use OsmAnd~ exclusively for hiking and biking, NUNAV is really good at car navigation.

Once again a little optimized.Based on the tutorial from @rar0 and @Stanzi

Battery drain seems to be very inconsistent: I typically leave my phone on overnight, but with airplane mode on, and with wifi/mobile data disabled. The first night, my phone battery only drained 1%, which is compatible with my experience with my previous phone (a Samsung a5 - 2017).
However, starting from the second night, the phone is draining ~15% battery with same setup.

I have tried to use AccuBattery, but without much success. That said, the power consumption of the phone seems to be relatively high even when idling. Right now AccuBattery reports around 250mA draw, and 20%/h consumption with screen on, 4.5% with screen off. These numbers seem very very high.

When browsing internet I can see the battery percentage dropping very quickly (e.g. 1% every 3-4 minute or so). On my old phone (which was 4 yrs old) I could get with same apps (and Android 8, which was the reason of the upgrade) 2-3 days out of the (small) battery. With the FP4 I’m nowhere near that.

The only “suspicious” thing I’ve done was to install (and then uninstall) an application to enable “tap to wake” (as I was a bit worried about power button wear just to see notifications). Since the app was not working as I expected I have uninstalled it. So I’m wondering if it’s possible for the app to have altered some of the phone factory settings, and now, despite the app is uninstalled, I’m stuck with bad settings.

Any ideas? What is your normal power draw? I’m surprised I’m having issues with this as many reviews mentioned that battery life was “better than average”. Thanks!

Hi and welcome to the community. I moved your post to this existing one, giving some impressions. Using the FP3 not FP4 I can confirm that a tap/wink to wake app def drains more battery, I think that the Phone is never really in “deep sleep” due to that. Therefore I deactivated this again on the FP3 .