I got my FP3 this week, bought a cable that charges it (it’s a IF certified cable) and started using it.
So far I can tell that the battery lasts a full day of heavy usage, and a couple of days of normal use.

In the setting menu I see that battery is 3060 mAh, but Ampere (the app I use the o check the effectiveness of the charging cables) tells me it’s 2000 mAh. 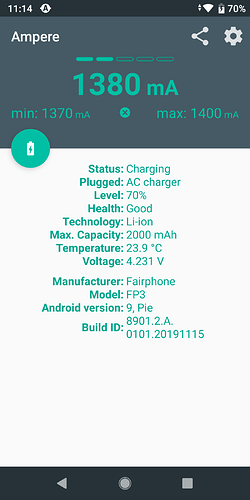 If the battery was 2000 mAh it wouldn’t last that much, not with this screen, so I’m not questioning the real capacity of the battery.
Has anyone found a difference in the battery capacity between the Android setting menu and other apps?

Well, your battery hasn’t been charged to 100% yet, so maybe the estimate isn’t definite yet? Have you measured the capacity before with a 100% charge?

Well, your battery hasn’t been charged to 100% yet, so maybe the estimate isn’t definite yet?

Seems more like a recurring theme with Apps trying to give the max. capacity, e.g. here, too …

In the menu, how big does it say your battery is? According to the specs, FP3 is supposed to have a 3000mAh battery. The phone itself however claims it has a 2000mAh battery: [Screenshot_20191128-100507] ( read out with app “CPU Info” from Fdroid ) however in “About Phone” in the settings menu it claims the battery tyype is 3060 mAh. i dimly remember seeing 2000mAh somewhere else, maybe while browsing sysfs in adb /sys/class/power_supply/…

Would it be worthwhile to open an issue with the app developer(s) so they get aware of the problem?

Since it’s not only Ampere, question is where do the Apps get the 2000 mAh from?
Perhaps somewhere the reporting is wrong in Android?

I doubt it’s measured. Going by the Ampere page on XDA, it relies on Power profiles for Android. Power profiles for in Android, in turn, needs a configuration file (platform/frameworks/base/core/res/res/xml/power_profile.xml) that specifies a lot of power values, including battery.capacity.

So does the app just retrieve default data here for a standard Fairphone … 1? (that had a 2000 mAh battery)

probably the system image on the FP3 is shipped with faulty (FP1 specific / someone forgot to edit/update) profile entries. It wouldn’t affect the low level drivers or how long the phone really lasts, but apps are going to report the wrong value.

the right battery for Fairphone 3 should be 4000mAh

right battery for Fairphone 3 should be 4000mAh

Because I had a Xiaomi A2 lite with 4000mAh battery, same screen size…2 days of work without problem

Ok, that makes sense.
But I don’t find the Fairphone 3 battery lacking, in contrast to the Fairphone 2 battery, which was a clear weak point of the phone.

yes, but also FP2’s battery was ok at the beginning, let see, it can be an upgrade