No problems, I’ll run my battery down to 15% and charge from there. I’ll post an update tomorrow

I’m unsure what charger they were on, I suspect a quick-charge one. I’ve a record of a charge-time of 65 minutes for 45-80%, which I believe was on a 1 amp charger.

I’m using an app that keeps record of charge times and has a battery alert function, so I can stop charging at 80%. I’ve not got a spreadsheet

I’m using an app that keeps record of charge times and has a battery alert function, so I can stop charging at 80%.

Is that still nesecessary with the FP3’s eco charge mode? The phone is supposed to stop loading (or only load very slowly) when reaching 85% to make the battery last longer.

I’m using an app that keeps record of charge times and has a battery alert function, so I can stop charging at 80%.

What’s that app name? Thank you

I guess we’re talking about “AccuBattery”.

“Battery Bot Pro” on f-droid does similar job, for variety =)

This is more about the physical life of the battery. Apparently it sits in too tight this time (in contrast to FP2). I have not read more reports about the issue than this specific post.

Compared to some real old mobile phones (back when every battery was swappable) the battery sits a bit tight in its spot. I however did not have to use any tools etc to take it off and setup my phone.

No, my battery fits super. No problems there.

Hello @Fairphone 3h30 of estimated battery Time at 91% is that something expected? https://t.co/XOUTjV91bk 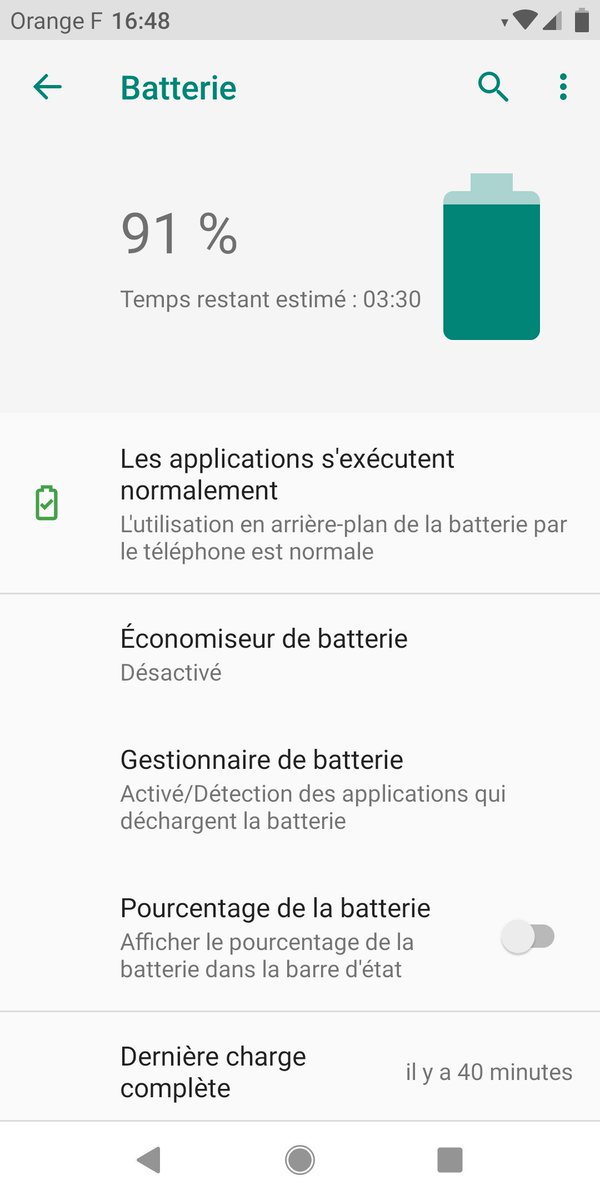 Can someone confirm?
And for those people who get more than 2 days on a full charge: what is displayed for you? I’m wondering if “03:30” may in fact mean three in the morning on Friday…

I never take those estimates serious. They seem like RNG to me as a HRM on a smartwatch

From my basic knowledge of french it is:
“Estimated time remaining”
So the question is accurate.
Add to this, that "Thibaut"is a french name and one should expect a frenchman to get the translation right.

With a battery level of still 91%, there is very few energy consumption so far to measure the remaining time by. That would be even more true, if the phone was charged to e.g. 95% only.
Is that understandable? I am not sure, if I managed to get my message right.

Maybe someone could tell that to Thibaut.

Edit:
In short: It might just be an estimation based on a short time of using the phone in a very energy-consuming way. And that way of using the phone is not how it is used on average.
I would start to suspect a battery issue, when it is “Temps restant estimé 1:30” just 2 to 3 hours later, while not streaming video or the like.

As I am French… “temps restant estimé” here means estimated remaining time… or “lasts for 03:30” until it runs out of battery. Looks like a battery issue, or the estimation is just completely wrong and everything will be fine after a couple of charing cycles.

On my FP3, is says “should last on til [Time]" where time is a specific point of the day.

If I compare with a Nokia phone under Android (10), the sentence in French says it lasts till a certain time and not how long is left. I think there is a mistake in the translation…

My Fairphone often behaves very strangely.
Yesterday, for example, I closed all apps and deactivated Mobile Data and Wifi. Within two hours it lost 6% battery. From 77% to 71%.

If I compare with a Nokia phone under Android (10), the sentence in French says it lasts till a certain time and not how long is left. I think there is a mistake in the translation…

Thanks, that was what I tried to get at. Maybe I didn’t make myself clear enough. I didn’t suppose Thibaut wasn’t capable of speaking his own language.

And the quality of battery estimation was also of secondary nature for me.
I just wanted to know if the French or German translation is buggy because obviously they can’t both be correct.

If I compare with a Nokia phone under Android (10), the sentence in French says it lasts till a certain time and not how long is left.

Well, the battery-status on my FP2 (Android 6) reads:
“29% - approx. 14 hrs left”
Setting the language to French (Francais) it says:
“29% - Temps restant : 14 h environ”
This equals the phone message for Thibaut.
Wonder, when they changed it, if it is different now with Android 10?

There is a graphic under that line showing the remaining time as a kind of timeline with an endpoint.
I would be really surprised if they got this wrong. I rather stick to the lack of accuracy due to the short period of time the phone is running.

Had mine in one week.the battery last only half a day. And the back of the phone is really warm?

Found the problem, memorycard.Took it out and everything was ok.