FP3 showed that this update was available, and applied it via wifi + reboot

FP3 was on December 2019 update before, and had been bought at the end of 2019.
After January 2020 Update, after the reboot, odd thing was, that some notification would never go away and never take action, asking me to select search engine. The icon and style was similar to google assistant.

Odd thing is I had obviously already selected some addtl. search engines during initial install and first use at the end of 2019.

Also I didnt find anything resembling search engines in the settings app. Only a “Search engine selector” app would show up there, which was running, and I forced it to stop there. That made that notification vanish. Its not nagging any more now.

Whenever selecting the notification and trying to run that setup button there it would briefly show “please wait a moment” or something similar in fullscreen, then return to homescreen, with still the notification being shown.

Dunno what this is all about. Cheers.

Dunno what this is all about

Following the European Commission’s July 2018 Android decision, Google is implementing a choice screen for general search providers on all Android phones and tablets shipped into the European Economic Area (EEA) where the Google Search app is...

I just tried to deactivate the app and that seems to work and survive a reboot.

I recognized also this behaviour, but didn’t find the ‘search enginge selector’ App for deactivation. In which part of the settings-app do I have to look? Thanks!

You need to use the “magnifying glass” icon and type in the term to find the app.

OK thanks. Now I only need to know how the app ist called in German Android

Haha, don’t be so lazy

Thanks! I tried ‘Suche’ and didn’t found it.

“Suchmaschinenauswahl” is the German word. You can also find it in

No, you don’t, actually.
You simply can set your phone to English, reproduce a solution given in English, and then set the phone back to German afterwards.

Just had an update and suddenly I get a search engine selector notification which won’t go away despite me having already selected s default search engine.

What do you mean when you say deactivate the app? Which app? How?

Earlier my phone had an OS update, and ever since I have had a notification asking me to choose my search engine, which will be my default for the home screen and google chrome.

Whenever I try to do this however, by pressing setup, it will tell me to “wait a sec” but nothing ever happens and I can’t get rid of the notification.

For a workaround see above.

I complemented my earlier comment so people don’t need to do so much reading.

Thanks for the info.

But seriously, can’t those updates be tested first?

I find the following variant easier and faster:

BTW: in case you rooted your Stock ROM with Magisk: you can install the OTA update by following this procedure without the need of connecting the phone to your computer: https://github.com/topjohnwu/Magisk/blob/master/docs/tutorials.md

Worked fine for me

Here’s a screenshot of what appears briefly: 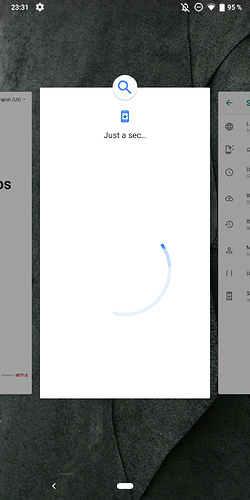