I have written to the support about 3 or 4 weeks ago (ticket #122401) but haven’t gotten a reply and now my phone is going from bad to worse. I can not use it anymore and it’s really urgent because i don’t have any other phone (cell phone or landline).

I have several errors but the big one is with the screen. It started with the edges of the screen not responding, this makes me unable to write “a”, “q” “ä” or “å” (i’m Swedish) unless i turn the phone, in that case i can use those letters but can not press space, since it is on the malfunctioning edge of the screen then. Even if it is incredibly inconvenient i can turn the phone every time i need to write an “a” or make a space but some apps won’t allow the screen to turn from “portrait” to “landscape” so i can not use them anymore.

The last couple of days the screen has started registering presses all over the place and it has gotten so bad that i can hardly use it at all. It’s like an invisible finger is pressing all over the place and whatever i try to do doesn’t register. I can’t even turn off the phone when it does that. I took a small video of it from my girlfriends iPhone, you can view it here: Youtube

I also have problems with the rubber on the casing expanding and coming off and my phone losing connection to the mobile networks and wifi but i wrote the support about this as well (same ticket).

I am starting to regret getting this phone and it’s so sad because i really really want to like it.

My tip: call the Fairphone support hotline. All of my tickets that I have opened through a phone call have been solved quite fast.
They will be able to help you with your issues.

Well for starters my phone only work sporadically so i would have to borrow a phone and second, it’s an international call and i am struggling to get my money to last the month, i’m not sure how much it would cost me to call to the Netherlands…

I was under the impression that they had an email support?

If anyone else has had similar problems to mine and had them resolved, please share here. I would like to know what to do.

I have similar problems: The last few days the screen has started acting weird, like registering presses all over the screen when I’m not even touching the phone. When it’s not doing this, I have problems writing some letters. For example, if I press the “d” button, it registers both “s” and “f” instead…!

I’ve removed the screen completely, and tried to clean all contact areas, but this doesn’t make any difference. Sometimes I can solve the problem by pressing the screen really hard in the bottom half, but the problem still reappears a while later.

The rubber casing has also expanded in several places, so it doesn’t really fit any more.

I haven’t contacted support yet, but I will do so this afternoon. I’d be interested to know if / when you get a reply from them…

Like you, I’m kind of starting to regret buying the FP2. I really love the idea, but the phone just isn’t reliable enough… I’ve got my old Samsung on permanent stand-by, just in case…

I have the same problem, raised a ticket a few days ago but as yet no response. The ‘Mad Invisible Finger’ seems to have gone away all by itself, but the far left of the screen, plus two columns (see attached pic done with a paint program) are screwed… 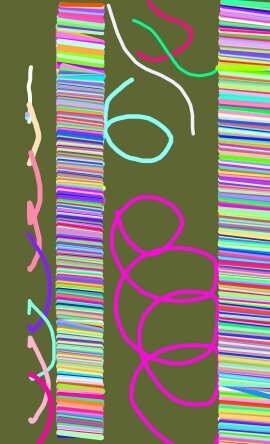 Yep, I have exactly the same problem, and this is my second screen! My phone hasn’t been registering touches to certain areas of the screen - I can’t press t/5 without turning the phone horizontal, and often get mis-touches. Then, today, it started with the ‘phantom finger’, making it completely unusable, as it constantly opens up random apps and starts typing into them etc!!

When I get the “phantom finger” issue (several times a day now) I can fix it by turning off the screen and then squeezing the whole phone (pressing screen and back cover together). Then when I turn the screen back on, the problem is (temporarily) fixed.

I got a reply from the support, almost a month after sending in my request. It was just a standardised copy-paste answer about how i setup a request to return my fairphone.

If anyone has similar problems, don’t bother contacting support. Go to http://return.fairphone.com and setup an account there, that is literally the only thing my contact with the support got me.

So will they repair the phone or send a new one, I wonder… Either way I guess there’s a big risk you’ll lose all the data on your phone. I was hoping to get a new screen or whatever, to replace it myself…

I’m hoping i can get my money back or get a brand new phone so i can sell it and get another brand.

I had same problem last week. It seems the support is overwhelmed. So I ordered new display module. It went fast, so my phone works fine now.

I will give them some time to change the broken module or give me money back.

Hi Rey_B, it was just sent to Netherlands the last days (arrived in Eindhoven at Friday), so I think it needs some days more, until I get a Fairphone2 back. I will report when I got it and installed all the apps again

I also got no reaction from Fairphone about my warranty display replacement. (Although they have the old display since Friday afternoon.) They don’t have displays, even for warranty replacements?

I bought a new display and fitted it, but the problem didn’t go away even then!