When I started my FP2 for the first time yesterday, it connected to the 4G network although I don’t even have a contract including 4G. What’s happening here?

My sister receives 4G on her Nexus, although she doesn’t have LTE (It’s a Congstar-Prepaid tariff). I think your carrier does activate this, but reduces your bandwith to HSDPA or something.
So, just be happy

Or maybe your carrier is giving everyone 4G as it’s easiest to treat everyone the same but only charging people who volunteer to pay for it!!! Who’s your carrier?

Does it seem to be working at 4G speeds?

Does it seem to be working at 4G speeds?

I don’t know what 4G feels like, but websites are loaded way faster than with the sgs 3 mini.

EDIT: By the way, my carrier is telekom.de

I also have 4G beeing with a company that doesn’t even offer it officially (Congstar).

Well, I knew that some people with older contracts had unofficial 4G, so already hoped that I would have it as well… And YES!!! I don’t know if it works at full speed, but it’s much faster then the HDSPA I had on my FP1 and almost as fast as my wifi.

My experience exactly. 4g a little slower than home wifi on a (supposedly) 200Mb/s broadband. On wifi my fp2 is no slower than my nexus 7 tab. Tho I didn’t actually race them …

Sounds like huskers doesn’t actually get 4g … Or the 4g is not too good. In England we only get decent 4g in cities

Just some information about (higher?) power consumption, if 4G is used…make your own summary about…e.g. here and here…

Just some information about (higher?) power consumption, if 4G is used…make your own summary about…e.g. here and here…

Thanks a lot for that!

I did’t expect to get 4G either, but the fairphone shows 4G (I would remember if I’d pay extra for an 4G-LTE contract)
I did a speedtest, but actually don’t know the specs of the networks
23kbit/s down 3,3 kbit/s up

So in your case, the bandwidth isn’t higher as HSPA (as I said, they are not giving you the full LTE speed).
4G “feels” faster, because of the significantly reduced latency (here is a comparison, it’s German but you’ll understand everything ;))

and a test with vodafone 5GB 3G contract (there was an option for the same cost 3GB 4G which I did not choose)
despite paying only for 3G I had a 4G connection but limited to 7kbit/s 3G HSDPA speed in mean. with peaks in speed over the 7kbit/s. you could clearly see in the graph, that the connection was capable of going faster, but was limited.
all in all I’m happy, to have 4G connection even if I don’t have the speed. Because I’m hoping of having a better signal (netzabdeckung) 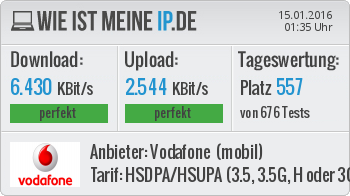