You’re right : I opened and cleaned the phone twice and it worked, but only for around 2 or 3 days before the problem comes back.

If the solution is opening the phone, removing the battery and cleaning the sensor every couple of days, that won’t work or me, and I guess it will be the same for every FP2 owner with this sensor issue

For now I use the power button trick to end calls, but it means I can’t access my phone at all during calls and that’s VERY annoying.

I hope a fix will come soon.

Sorry, that turned out weird. I meant it as a heading, but it became the question. The question is: Is there some setting that disables the touchscreen while talking on the phone? Because every time I talk on it, whether I dialed the call or just answered it, I have four or five pages of weird stuff to click away at the end of the call. I never take the time to look at them because I get panicked when I can’t find the “hang up” button to end the call, but either my face is starting up apps while I talk, or there’s some kind of statistical pages on call length or something that pop up. Either way, I want it to go away. My previous phones have had a screen lock while a call is under way. To press the “loudspeaker” or “end call” buttons, you had to tilt the screen to a 45-degree angle, anything more vertical than that was locked.

i don’t understand if this issue will be fixed in the next release or if it’s under analisys…
My problem sometimes is that the screen turns off during a call and when i want to end it, it takes me about 30 seconds after saying goodbye to turns on the screen, digit the unlock code, open the current call menu, close the call…

The root cause is the same, or i must open a new issue?
Best regards,

I cut the top off my screen protector and this seems to have fixed it for now, but its still a bit jittery. I haven’t yet had time to figure out how to clean the sensor from the back - the screen doesn’t easily come off.

ut weird. I meant it as a heading, but it became the question. The question is: Is there some setting that disables the touchscreen while talking on the phone?

Proximity Screen Off Lite but this isn’t working for me.

Is there a way to disable the proximity sensor, as if it doesn’t exist in he phone?

). Concernig the battery drain (some samsung doesn’t have proximity sensor), there are other apps like Call Screen Lock, which solves it.

Is there a way to disable the proximity sensor, as if it doesn’t exist in he phone?

Not by software - but there is a diy workaround that essentially turns off the PI sensor:

Hi, I have the same issue with the proximity sensor. I've found a workaround on the net (FP2 does not seem to be the only one with proximity sensor trouble). I pushed a small piece of aluminium foil on the sensor (see picture below). It makes the sensor feel that there is always light and the screen never turns off. I will see with time if the workaround is not worst than the problem: the screen is on during calls so the cheek can interact with the screen. [image]

I have been having the same issue (using the power button workaround for now); I think for me it is not dust-related, though I tried cleaning it up anyway.

But, after that, it remains at 0.0 forever, until the next reboot. So either it is a software failure in that it is not correctly polled again (or if it is signal-based, the signal gets lost, not sure how it is implemented), or the proximity sensor stops working once it has gone to ‘near’ mode. If it was a complete failure I would expect it to always be 5 or 0, not jump once…

I do have the same problem with the sensor since the last update.

Moin show, I had today again the problem that the dark remained as I wanted to create. Nervt very … But Maybe If the error Random fix times …

I’m also having problems with screens being activated by my cheek during calls - very annoying. I worry that potentially I may activate/de-activate/delete/install something I don’t want to and won’t know about!

I also have a problem with low volume during calls even with volume turned up full. Loudspeaker seems to be ok though so I use that when I can.

This seems like more than just a few people to me and needs sorting!
Andrea

This seems to be a problem with many phones, as there are a couple of apps that offer a workaround for this, like call screen lock. You may wanna check if one of these apps can help you.

Same problem here. I am SOOOOOOOOOOOOOO frustrated with the Fairphone 2 and all the issues that come/came with it. After having had a FP1 (which was stolen) this new phone is just such a massive disappointment. So sad because I really thought this was a great project, but faced too many annoying issues with the FP2 so I’ve kinda given up on Fairphone.

I agree, that a not working phone is really frustrating and the bad support doesn’t make it easy to handle.
But you have to know that the modular concept of the FP2 is one of the first and with supporting and buying a Fairphone you support pioneers with the possibility to struggle with minor and/or major difficulties… Supporting a vision is not always easy, sometimes it needs (a lot of) patience…!

Yep me too. Endind calls with power button is fine a s a workaround but automated calls which require dialing through a menu are impossible!

Thanks this really helps - it’s been bugging me for a while. If I make sure I hold this part of the phone to my ear then it doesn’t switch off during calls.

hey guys,
I have a strange observation:
the proximity sensor on my fp2 stopped working too, cleaned it, reassembled it, worked again. some weeks later, it stopped working again.
I use Sensor Sandbox to read out the Signal, see screenshot.
Normally I get value zero. since it is not working correctly. When I apply pressure near the proximity sensor using my thumb and first finger (kind of squeeze the phone), I get value 5.0. This persists, until I hold my hand over the proximity sensor, then I get zero. So it is working normally. But when remove my hand, it stays at zero.
Didn’t try yet, if this works during a phone call. Can somebody try and confirm this behaviour? Could be a workaround 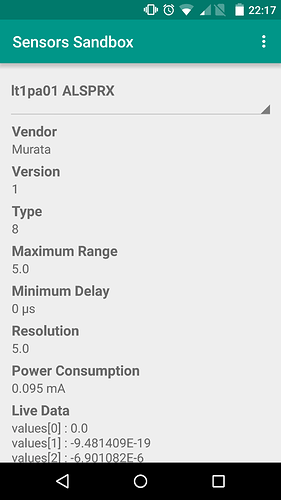