since few days after 5 minutes of working with my FP2 (using latest OS/updates) it looses its WLAN connection. But it’s not a problem of our WLAN…

I do not have any ideas which option or similar causes this behaviour. But maybe a problem of the latest FP OS update? 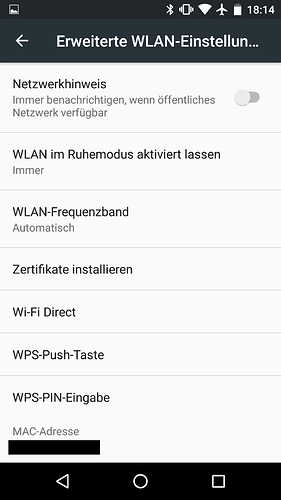 Changed the topic title to better its chances being searched.
I guess English-speaking users mostly stumbled across “WLAN” somewhere already … but the more accepted term is “WiFi”

I used WLAN instead WIFI because I want to avoid such a term labeled as “registered trademark”: https://www.duden.de/rechtschreibung/Wi_Fi

But, nevertheless: with a simple restart I solved (temporarily?) the mysterious problem

Seems your phone (accidentally) had airplane mode activated, your screenshot in your first post of this thread is showing this.

It’s my default setting – using the Phone primary for writing and getting messages… In addition I do not have a flatrate, usually only using the phone in areas with access to WIFIs.

All the time the automatically log-in worked fine with the “airplane mode”. But my above mentioned restart solved this problem in fact only temporarily

Now having the same problem again. The FP2 quits the WIFi connection after some minutes and I have to manually reconnect. Very frustrating.

Hi Webaschtl,
I have the same issue: I can connect to my home internet connection but I need to be very close to the modem. I never had any issues with that before the last upgrade and other people in the house don’t have the same issue with their phones.
I tried restarting, turning airplane mode off and on again, remove the connection and adding it again and removing the battery, to no avail.
Anyone else having the same issue?
Thank you

Which hard- and/or software does your WLAN router run?

Hi JeroenH,
I’m not sure if this is what you are asking but this is what I’ve found:
Make and model: Huawei HG659b

Hope this helps and thank you!

This seems to have been solved after a while, not sure I have an explanation but glad it was solved. Thanks!

How was it solved? Were you also using Airplane mode, activating only Wifi? I have the same problem with my fairphone 2. Like Webaschtl’s original post, the Wi-Fi just disconnects some time after the screen turns off apparently.

Hi MacroMarcoPolo,
I’m not sure how it was solved. I thin there was a Fairphone upgrade available shortly after I posted the comment, and it solved after that. But if it had something to do or not, I can’t tell.
I hope it gets solved soon!
Good luck,
Marta

Does your phone just disconnects Wifi when the screen is black? In the advanced Wifi properties you can adjust if the Wifi stays connected or not during the phone is not used.

Hi all,
I recently had a similar issue, my FP2 kept disconnecting from the Wi-Fi wether I was using it or if it was in standby. It wouldn’t reconnect automatically as it used to do, I had to go in the settings to manually select the hotspot I wanted to connect to. Same story if I moved places to another place with wifi I knew, the phone wouldn’t automatically connect.

I seem to have fixed this issue by removing all the now-useless hotspots in the “registered hotspots” setting inside the Wifi setting. This list was quite full, like around 50 or 60 registrations, so I cleared about 81% of them to keep only the used ones. Since then my phone automatically connected to wifi networks again and didn’t tend to lose the connection, without even needing a reboot.

I hope that will help you too,