If I get an incoming call my FP2 rings (and vibrates if option is activated), but the screen takes about 5-10s until it turns-on and only then I can see who is calling.

Btw: is there an option to enable an “increasing ring tone” (starting with vibrating and then ringing very quite—>ascending to the max. ringtone loudness set in options)?
If not: I hope GravityBox will soon be installable to the FP2 as it brings us this feature…

Maybe we face different problems, but at least they sound like the similar direction. See link for my problem description:

Hi everybody, whenever I receive a call to my FP2, the screen changes to bright grey and says "loading". Sometimes it changes to the welcome screen (blue) as if the phone would be booting, and then changes quickly to the "loading"-screen. After the caller has hung up their call, the screen turns to standby-black, then I can use it as usual. But there is no message of a missed call (neither they appear in my phone list), and the caller doesn't get the opportunity to leave a message on my mail…

Thanks for your crosslink. I was aware of your post (as you can see at my headline

Lately I also notice that it takes either about 5 seconds after pressing the ON-button until the screen wakes up when screen is switched off. If I press the button twice, it reacts instantly…
Could it be related to my original question?

I have no idea where starting to look!

Increasing volume is hidden in settings -> sound and notification. Below ring tone. 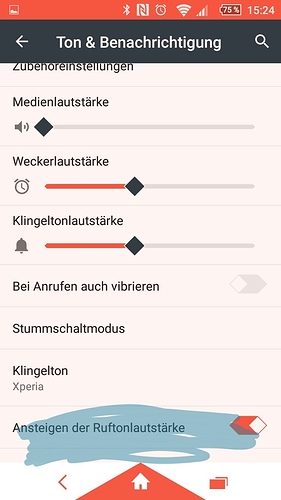 Note: This screen shot is not from a Fairphone but I had this feature in every android phone and I am running 5.1 as well.

This setting doesn’t exist at my FP2 (screenshot later).

Any ideas about my initial problem?

but the screen takes about 5-10s until it turns-on and only then I can see who is calling.

Luckily I could solve this issue.
The app SetCPU caused this problems after I enabled “profiles” there (“screen ON/OFF–>Set CPU Frequency to … MhZ”).
I disabled these profiles concerning screen ON/OFF and now it works.

Although I find that the screen still takes too long with 1 second to switch on I think that is the intended behaviour.

With this I could also solve my problem that the screen takes 5 seconds to turn on after pressing the power button. This works now also.

Still open is the question, why the setting for the “ascending ringtone” is not implemented in (my?) FP2…