I’m interested how long does your FP2 Battery last?
I must admit that I use my FP2 a lot, but the maximum duration was about 12h until I had to recharge it. I try not to go below 20% capacity and I did not use it, until it is completely empty, so I can’t tell how long it would last from 100% to 0%.
(As far as I know below 15% should be avoided)

E.g.
Does it harm your phone to use it until it switches off due low battery?
Should I charge my phone before first use?
Is charging during the night ok?
Is there a difference changing the phone if it is switched on or off?
…

The first days I was using my FP2 (setting up all the things), I needed to urgently charge it every night.
Now I calmed down a bit and focused on other things. I unplugged my phone this morning around 7am:

That “Make it last longer” is a link to the battery usage dialog. I saw there that K-9 Mail was using unusually much battery, and that made me want to properly set up push notifications instead of having to poll every minute.

Google Apps eat a lot of battery. Apart from a weird “could-be-bug” thing that happened to me today that drained my battery from 50% to 3% overnight, I can make it last two days (on a google free build of aosp).

I’m a tad bit frustrated by it since my previous phone could last four days, but that will do

and I have a spare powerbank.

@huskers and @Arvil thanks a lot for your feedback!

Question to Fairphone Support team: is the battery recalibration for FP2 the same as for FP1/FP1U?

So many problems (GPS & battery issues)

On Fairphone OS 1.8 this is not required anymore because the bug was fixed. @Lovisan Which issues exactly are you experiencing with GPS? You didn’t specify in your original post.

About the battery: At FP they told me that the battery has its own software inside, which sometimes needs to be reset. (This would explain why your bf had problems with your battery and you didn’t with his. Apparently it’s the battery itself which is causing problems.) Since you are in an experimental mood…

After the last charging my FP2 rebootet and showed a dead Android animation :frownanguished:
(I was not fast enough to take a picture)

It seems that my battery is driving completely nuts: 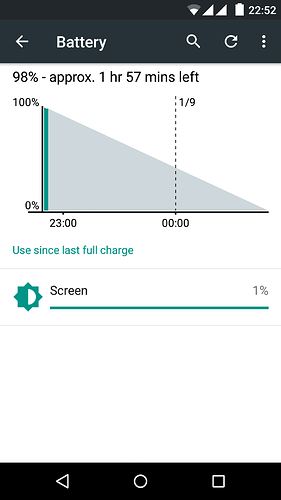 I don’t now if this is a battery or an issue of my FP2.

@werner_noebauer:
Then maybe do a complete discharge and charge cycle and observe the behaviour.

For all other FP2-users:
I would like to use this thread for a collection of your first battery duration tests, as FP did not anounce any word about this.

I would welcome it if we can collect some rough numbers e.g. for idle, “normal” usage and heavy load, as well as 2G vs 3G, data vs. offline, WLAN on or off, GPS in usage with and w/o screen on…screenshots welcome.

If preferred, I could also open a new thread for this topic…
Edit: I opened a new topic: “FP2 Battery Saving Chalenge”…

I guess “BetterBatteryStats” wont work due to missing root?!

I made a factory reset and will watch the battery behaviour.

About the FP2 battery discarge and reset: has this to be done the same way as with FP1/FP1U
(see post above)?

didn’t start with full charge, but not that
bad J

-Was rather busy these days, so had not
much time to play around….

-Not using gmail account, just checking
mails from „somewhere else“ every 15 minutes 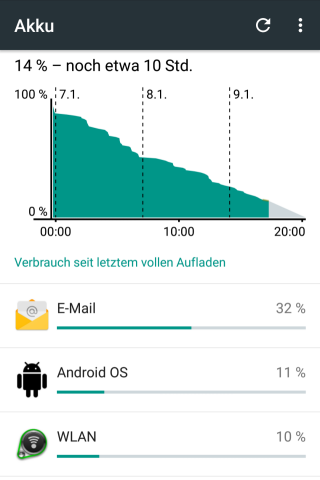 This battery duration makes me jealous

But also makes me happy to see what is possible

What did you do to get this kind of battery life? My FP2 runs for about 10 hours before the battery is flat. That is with active wifi and some browsing, but low screen brightness and no heavy usage…

PS: Of course this proves nothing, but my widget says I have 8 days left with the battery at 85%…

wifi seems to use up a lot more battery for me than on previous phones. I have been looking at battery use of different apps etc using the GSam battery monitor app and wifi seems to be consistently responsible for 15-30% of battery usage, v my previous phone where is it closer to 5-15%. This is corresponding to pretty poor battery performance in my fairphone, so could it be that the wifi battery use could be optimised better?

May this be related to the 5 GHz Wifi? 5 GHz has a shorter range, so it needs more power for the same performance. I don’t have my FP2 yet, but I will test this.

You can check your WLAN-connection by using e.g. the Fritz!App WLAN

For those with poor battery life, check if your wifi symbol has an exclamation mark / point. Apparently there can be issues with the wifi that causes battery drain

Well what did I do besides very little because I was rather busy at work:

-No sync
with google, I’m using email from another provider, and check it every 15mins,
sometimes I sync Contacts & Calendar with my Desktop-Outlook using “MyPhoneExplorer”

-Location is switched off

-Use Llama to toggle the Wlan when I enter/leave home (it works with the GSM-Cells, not
GPS needed)

-No Messenger or push service in use, at least I think so…

-But: Both Sim-slots are in use.

-My Wlan also has this exclamation mark, I just started to live with it.

My overall usage is quite low at the moment, reading news when I get to work, and reading news
when there some left while I drive home, checking mails every 15 mins, and make a
call when it is necessary.

Maybe this helps a bit.

I just unplugged my phone when it was around 80% and noticed this gem.

Maybe you can contribute to my freshly opend “FP2 Battery Saving Challenge”?

…Is charging during the night ok?

To the phone it will do no harm although you should think about if you want to follow battery-health-suggestions about using battery only between 20-80% of charge…then overnight is no choice (btw: does anybody knows a trustworthy app which can handle this automatically?)

I just want to share additionally to here, that my original FP1-charger consumes 1.5Watts if the FP2 is plugged-in, power-off but already reached 100% charging - which is quite high (in comparison to nearly 0.0W if the charger only is plugged-in without a FP)
I will compare it later to the powered-on-FP2…

Also my battery seems to drain a lot faster than expected. Yesterday I used the phone about one and a half hour for browsing and 9 hours idle, and the battery was finished. We who seems to have our batteries making not even a working day, do we have broken batteries, or is it more proper to think it is some bug in the software?
I have the WiFi, GPS, Bluetooth turned off. Also lowest screen brightness and as few push apps possible.
I can make it a whole working day by using avast Battery saver (but not even then I get over 12 hours battery life and these kind of support apps shouldn’t be necessary with a brand new phone?)

Just wanted to know if it could be an idea to contact the support and ask for a new battery and send back this one?