Sorry to desturb, but I cant connect my FP1 (version Cherry 1.6) to the PC any longer. I tried on two different PCs, the cable is fine, as the phone is charging normally with it.
I saw the tutorial hint of opening the notification panel and selecting “USB connection” and then “MTP” mode… problem is, I cant seem to find it on the phone. and help?
thanks!

Not sure if you already saw a screenshot. The below menu (sorry it’s in German) should be available when you drag down the upper end of the screen (i.e. the notification panel, yes). 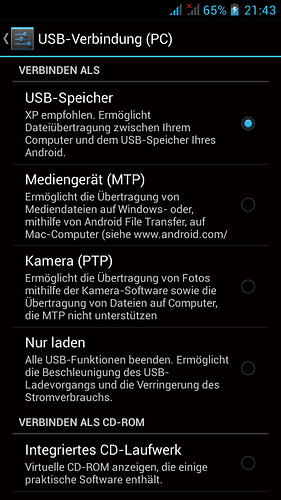 A question: Did you update recently to Cherry 1.6 ?

I upgraded about 1 year ago, all was fine until recently…
now the problem is that just this screen is gone and nowhere to be found… i used to get it automatically as soon as i plugged the phone to the pc and now nothing is happening any more.

and under “Storage” if I click on the down left button I get the option “USB computer connection” but no further options and nothing happens if I click on it there, it only updates the Internal Storage data, or so it seems.

the cable is fine, as the phone is charging normally with it.

It’s no indication of a fine cable for data transfer, if the phone is charging. USB data cables have 4 wires, charging cables have only 3. It’s possible that one of the 4 wires of your USB cable broke and it now got “downgraded” to a normal charging cable.

Have you tried another cable?

I tried two different cables, same thing with both of them. Should I get one more to try?

I would recommend to contact Support immediately, especially if your Fairphone was originally delivered after 24 January 2014 (= still under warranty). Another idea to try: Carefully clean the USB port (blowing). Hopefully Fairphone Support will provide better suggestions to try before a repair is considered.

thanks for the hint! i will do tha right away!

Hi,
Have you solved this issue?
Seems i have the same here.
FP1 doesn’t appear anymore.
Battery charges (eventough gently blowing on the cable could sometimes disconnect) but Windows doesn’t seem to be aware there is a storage device at the other end of the cable. At all…
Thanks

Sounds to as if you need a new USB cable. I guess that a wire inside is broken, so it still can transmit energy but no data anymore.

Those really are crap aren’t they? It’s the second one I use in 2years and now it’s the same with both…
I ll get a brand new one to be sure.

A new cable did the job.
Still I have to plug it very firmly with both hands and cannot move the phone while plugged. It would disconnect because of the slightest move.
So, I guess there is something not right with the phone itself…

Have you already tried to carefully clean your USB port? Maybe there’s just some dirt in it…

I cleaned it, it works much better.
I feel so stupid now