After some time and filling up my FP1 with a lot of SMS messages (some hundreds, maybe thousands?) I noticed that during scrolling through the list of SMS the messages “Is beeing updated” (“Wird aktualisiert”) is displayd.

Althoug I am aware, that some thousands SMS are quite a lot, I can’t understand how the OS/hardware is not able to deal with this, as an SMS has just some KB (or less) of size and RAM/storage rate should be at least some MB/s.

Playing HD videos or browse on heavy content websites should stress software and hardware quite more and runs smooth at my FP1.
Am I wrong?

Can anybody confirm this behaviour?
Any explanation, solutions or workarounds (without using a differen message app)? 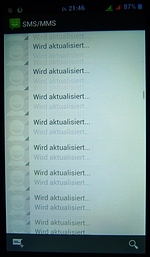 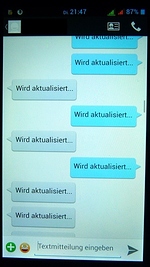 I tend to use as less extra apps as possible.
It is more like “It has to work - why doesn’t it?”

Which SMS App you would recommend? Does all the available SMS apps using the same stock Android SMS storage (like the calenders do)?

But anyway: any explanations/solutions for this odd behaviour?

I think you are confusing different kinds of “CPU behavior”; SMS list rendering is very different from video displaying.
The SMS app simply handles a list of SMSes which gets populated from an internal database; in this situation (please consider I didn’t see the source code, so I’m supposing the following statements) the SMSes content is irrelevant because you’re scrolling a list and I suppose it is populated on-the-fly by querying the DB table(s) in order to get the content to display. Another possibility is the SMS app loading the whole database contents upon its opening (I don’t believe this is the case for performance reasons) and the list is populated at startup/opening of the app. In both cases I suppose there are performance issues due to the number of the items and how the scrolling component loads and displays the content.
Furthermore I suppose the scrolling is handled by the 2D acceleration processing, which normally preloads the content to display in an internal buffer while displaying the current content and switches the buffers while updating the screen content (scrolling is the worst case because in order to have smoothness you have to update the screen very fast and frequently).
You cannot compare this feature with video playing because normally this is handled in a dedicated hardware part which also handles the video decoding (one of the closed source (in)famous parts of the kernel code).
You could try to play a bit with the acceleration settings in the developer setting page but I can’t assure you’ll be able to solve the problem definitely; I also have a contact with about 2k SMSes but updating while scrolling the list is faster than yours so I suppose there is some process which uses your CPU continuously slowing it.
Bye!

Have you saved a lot of your SMS on your SIM card or have you moved your storage for this app to a SD card?
Also what other apps are you using? I can’t really compare, as I’m using Cyanogenmod and not FP OS, so it’d be interesting what FP OS users will have to say.

For SMS / MMS I’m using Signal (formerly TextSecure) but there are a lot free replacements for the standard SMS client, you could try.

So for troubleshooting reasons I’d suggest you check where your SMS are located (SIM / external SD) . If so, move them to your internal drive. If problem persists, Try a different SMS client and see if problem persists then as well. Tell us more about your system (version, background processes,…)

Thanks for the nice thoughts…

I think I wont switch to another App, because it is not THAT a big problem to me. I was only wondering how this happens.

I just checked with TitaniumBackup: my mmssms.db is 2.15 MB. It’s nothing, for a Quadcore CPU@1.2GHz and 13GB@some MB/s, right?
Plus: I can’t see any “cache” behaviour: If I scroll realy slowly it didn’t remember if I scroll back fast through the same contacts/SMSs…

I also don’t believe in a problem with the 2D-video-display problems. I guess the problem is not having the (2MB) data available in advance. Only accesses in the same milisecond, when it is needed…Should be a problem of Android itself, I guess.

Plus: I can’t see any “cache” behaviour: If I scroll realy slowly it didn’t remember if I scroll back fast through the same contacts/SMSs…

I can’t follow. What have you tried? Scrolling through previously loaded messages?

Sorry!
Yep! Scrolling down very slowly (with time to properly load content) and then scrolling fast up again (where content COULD be cached in between). But it didn’t change the behaviour.

At this step it would be a good idea to check, whether this occurs with a different SMS app as well or if you have been experiencing similar problem with other apps. If so, your cache partition might be corrupt.
Did you temper with that or your partitions in general? E.g. while manually applying a unified storage update? You could - however try to wipe your cache partition from the factory reset menu, which should be a safe thing to do. Problem: It might or might not solve the problem, but that won’t let us know whether or not that’s the underlying cause of the problem.

EDIT: Titanium backup is known to cause problems with other apps. Might be a wild shot, but you could try to uninstall TB as well…