I live in Melbourne (Australia) and have had a FP1 from the very beginning (1st batch), I’ve had no problems with H+, H, Edge or GPRS, but whenever I’m in a 3G only area (i.e. no H or H+), I never seem to get a data connection, even thought the phone shows several bars coverage along side 3G. I’m not sure whether this is a hardware issue with my particular phone or a software issue. I can’t imagine that it is an frequency incompatibility issue though.

Here I have to correct you, @therob: 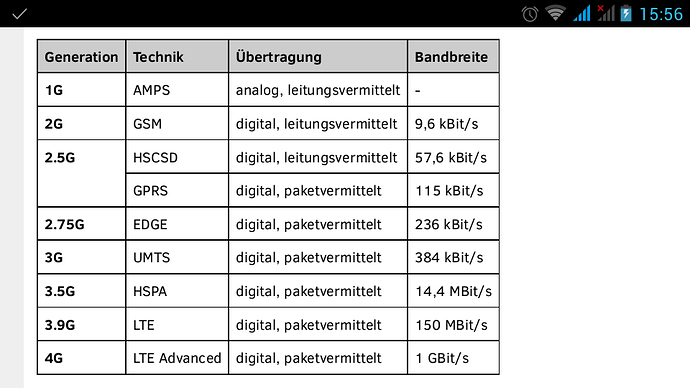 [Source]
A quick internet search reveals that it is not uncommon that user have 3,5G, but not 3G.

Hm, OK. but I can’t find, what your correction is exactly about…despite in the technical point of view one can be more precise about the standards…
If we only speek about 2G and 3G (without the sub versions) my statement is still correct, isn’t it? Or how you would define EDGE=2.75G --> =2G or 3G? Than: LTE=3.9G–>=3G or 4G?

I think my questions to Darren are still valid, despite the exact definitions of 2G/3G, aren’t they?
Cheers, Robert

Found a (rather long) thread on an Australian web forum:
http://forums.whirlpool.net.au/archive/1631467

To sum up the discussion (don’t know if it’s correct):
H or H+ signifies data transfer over the 3G network using HSDA (or HSDPA). 3G signifes that your phone is connected to the 3G network but that for some reason a data connection hasn’t been established.

From the posting it’s also suggested that some Aussie network providers are worse than others in this respect.

You can also check with your provider what are the correct APN settings and see that your FP is set up accordingly. Sometimes providers change this without notifying.

@therob: I thought that 3G and H mean two different types of connections. Apparently I was wrong. It seams that, as @kgha said, “3G” appears if the 3G-connection is idle, and “H+” appears, if it is active. I can follow this behaviour on my own device.

On my FP1 in the Austrian A1 network, there are frequent switches from idle (3G) to active (H+). It seams that what @Darren_Smith is experiencing is the FP1 not being able to switch to active mode.

@Darren_Smith You could of course do a Hard Reset, to make sure that it is not the software, which is causing the troubles, or send your FP in for diagnosis to rule out a hardware failure. The easiest however would be to get in contact with your provider, as @kgha suggests, or try out a different/new SIM card. I hope this helps!

@Darren_Smith, @Stefan : do you both really observe a “3G” symbol at the place, where normally G/E/H/H+ stands? I never saw this at my device althouh I switch data connection off/on very often and also toggling manually between 2G only and 3G only (by GravityBbox).

Although sometimes the FP is quite slow to establish any data connection (although maximum coverage bars) and sometimes after pressing the software button “enable data traffic” it does not show up any G/E/H/H+ or with a huge delay (some minutes). But I never saw a 3G-symbol…

If I am in “3G-only”-mode (by GravityBox) when “Idle” I have H, sometimes switching to H+ if the provider allows and data are send…never saw “3G”

However, immediately after this, it switches to H+.

If I am in “3G-only”-mode (by GravityBox) when “Idle” I have H, sometimes switching to H+ if the provider allows and data are send…never saw “3G”

It might be confusing, since H and H+ are 3G technologies as well. So if you set GravityBox to 3G mode, it most likely accept HSPA connections as well.

Thanks for the replies guys. @therob : what I observe is that I get G, E, 3G, H or H+ displayed besides the connection bars. With G, E, H and H+ I get the up and down arrows (data flows), but with 3G nothing (no data flows). If it says 3G and the up and down arrows do start to appear it switches straight away to H or H+. There are many occasions in and around central Melbourne when 3G displays with 2 or 3 bars and I can’t get any data flowing (I have an app that says when there’s no data connection). My data connection is always turned on.

@Stefan: I changed over to a single partition a while back when upgrading to 1.8.5 (=hard reset?). The same problem was there before and after. You might be on to something with the sim card. I was recently over in Sweden on a local comviq sim card and I had a much better connection (always H or H+ it seemed). At the time I put it down to better infrastructure, but perhaps it is something else?

In Australia I’m with Telstra, the former state owned phone company, so their hardware and coverage should be good. I guess that I should first check my APN settings as @kgha suggests. I’ll let you know how it goes.

Update: I have updated my APN settings for Telstra (http://apn-settings.com/australia/telstra-apn-settings/). Things seem to have improved slightly, but I’m still testing. More updates to come…

Maybe you could borrow and test a friend’s SIM card from another provider? That could help you to determine whether it’s a hardware issue or if it has something to do with how well Telstra covers your area(s).

Just a quick update. The updated APN settings seemed to improve things very slightly, but I’ve actually noticed another ‘feature’ of the problem. If I have an ongoing data connection via Edge and then the phone finds 3G coverage, it drops the Edge connection, but then can’t get a H/H+ connection and so loses connectivity!

I’ve not managed to test using another SIM yet. That will be my next post. Am I really the only one with this FP1 issue (leads me to think that it is the sim card or tel co.)?

This can be a nuisance in areas with decent Edge/2G coverage but a weak 3G signal, as the location of my weekend cottage. When set to automatic mode, the phone jumps between the 2G and the 3G net, causing interruption and delays.
My makeshift solution is to turn off 3G completely when in that area. Contrariwise, when at home/work where HSDPA coverage is good (but can be lost in stairwells and elevators) I keep my phone set to HSDPA only to avoid this jumping between networks. When travelling by car over longer distances, I choose automatic mode.
A bit clumsy, but as long as I remember to change the settings I get a stable connection.

Thanks for that workaround @kgha. It feels like android could use a little more intelligence, learning to wait until the 3G signal is a little more stable before switching over. This could perhaps be a further built in option: use 2G/Edge unless there’s a medium to strong 3G/HSDPA coverage. Although I’m probably describing something that is very hard to actually do under the hood.

Perhaps there are some 3rd party apps that allow this extra control?

Another update. I’ve now tested with a new sim card (same australian provider - Telstra), but there was no noticeable improvement. So it’s either down to Telstra’s poor 3G network in central Melbourne or some kind of software or hardware issue with my FP1.