I’m wondering about the smileys that can be used on this forum. They popup whenever I type a “:”, but then depending on what characters I write next I get different sets of five smiley faces and random objects.

So my question: Is there a) a list of all available smileys with their respective names or even b) a functionality on here to have like an overview of all smileys while writing a post?

This is not exactly first priority, but I was simply wondering

After searching through the discourse forum, I found out that there is no ‘official’ list of smileys (not that I can find), but someone posted this list. Every emoticon on this site should work.

They’re just regular emojis like on most keyboards, nowadays.

I wonder why they are not integrated in the discourse forum with a little button on top of making a post. But then again I guess that would highly increase the use of smileys and posts would probably be full of them.
Anyway, I’ll bookmark your post for future reference!

He has probably bookmarked the site I suggested

I just wanted to try :at: because the smilies seem to be the same as in Whatsapp. But there is no Austrian flag in the FP forum…

Not a Belgian flag either

I moved a post to a new topic: I cannot see emojis on my Fairphone

One can always click “more…” below the popup and you will see all the available emojis. 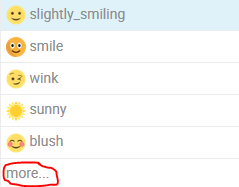