##Quick poll to start with:

Do you see these 20 symbols:

and the 5 tags of this topic as flags?

##Why should I care?
We could start using them in this forum to tag non-english topics instead of adding :nl:,

##Why?
The advantages of using them as tags would be:

##Then why don’t we use them already?

The disadvantages of these unicode flags are:

##So do you think we should do the switch?

I only see 10. The other 10 display as letters in boxes for me. It is probably because I haven’t updated my OSX in a long time and am very reluctant to do so.
On my FP2 I see all 20.

This is from my mobile Firefox, I have emoji one installed on my FP1 (search the forum for more info): 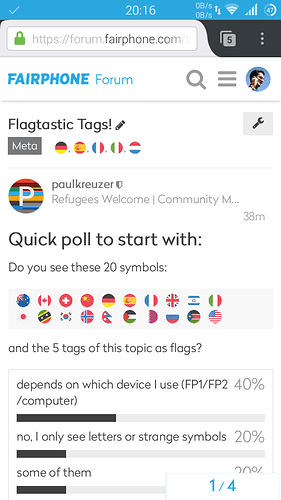 On my PC with Windows and Firefox I don’t see the flags. I believe there are emoji font plugins though.

On my FP2 it works with Firefox, not with Lightning.

This is a wiki post.
Please add your device + OS + browser + special configurations and signal whether the emojis work. If you find a way to make them work please add that as an extra entry. 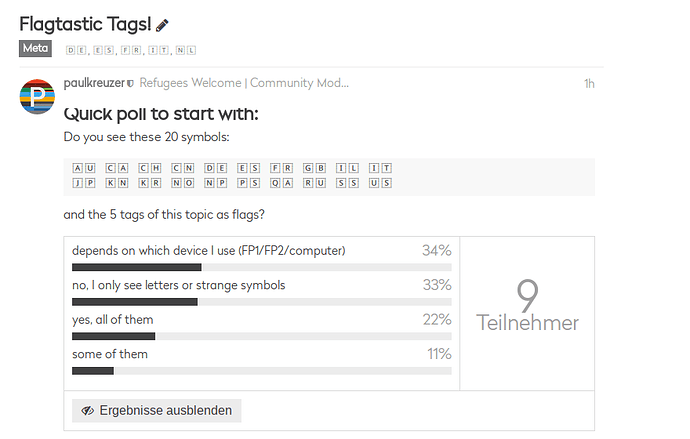 Not so cool…
But the idea is good!

I don’t know how to setup this. I’m on a Linux system.

I meant, what OS (which Linux version) and what browser do you use? So we can add it to the wiki above.

Works fine on my Open OS FP2 with Firefox.
Does not work on my Kubuntu 16.10 with Firefox 51 (I block cookies and similar stuff so it might be because of that).

What I wish if this is introduced is an instruction how to mute topics in foreign languages.

What I wish if this is introduced is an instruction how to mute topics in foreign languages.

Good idea. Here it is. If and when we introduce this I’ll make a post explaining this as well as hopefully some ways to get the flags to show on different systems.

First tap on a tag. No matter if you see it as a flag or just letter-symbols, you’ll get to the tag view, where you will see the flag:

You won’t see the “rename tag” and “delete tag” buttons, but besides that is a button to choose the notification level: 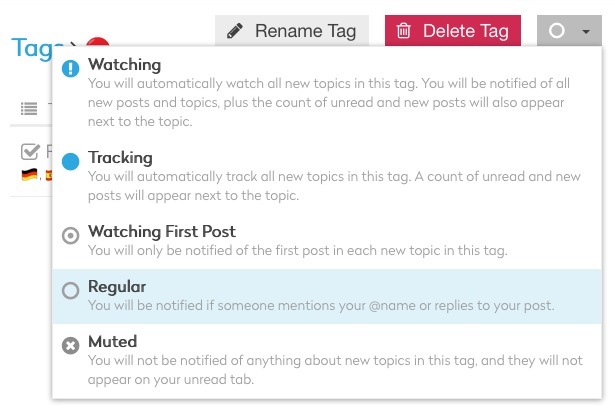 Setting it to “regular” is probably best if it’s a language you don’t speak.
Otherwise you won’t even be notified if you are mentioned or quoted.

I’m not a hundred 100% sure about multilanguage threads, but I believe watching or tracking one tag outweighs muting (or “regularing”) another one.

So e.g. if a thread is tagged with

you’ll still get notified. Whereas if you don’t explicitly follow

a thread tagged with

will be silenced for you.

Ubuntu 16.04, Firefox 51.0.1 does not display flags for these symbol combinations.

Just execute this and reload the page:

p.s. if you don’t like the font and want to go back:

thanks, but it looks it’s not part of the official repos of 16.04

It has been introduced with yakkety.

And it is available in zesty, too.

So I guess, that it’s now part of the repositories (for new releases).