Dear friends from the Fairphone community,

Please let me share with you my (bitter) experience. Spoiler alert: the story doesn’t end well

In March 2020, after months looking at Fairphone with glowy eyes, I purchased a Fairphone 3. I didn’t need a high-performing camera or massive capacity to play 3D games on my phone, but I was charmed by the potential of a long-lasting device I could repair myself with benevolent guidance.

Towards the end of May, I started encountering dysfunctionments of my screen (I would later know it’s called “ghost touches” by technicians). As you probably know, the device system to test my screen proves useless in such case since it shows that everything works fine when it works, but you cannot access the screen testing when your phone misbehaves! Back then, I still hoped that these were technical glitches that would go away with updates of my phone, and 80% of the time I could use it normally so it was fine.

But these dysfunctionments multiplied over time and on 24 August, after days of trying to get someone from the support service on the phone, I created a ticket (request #379779 to be factual) on Fairphone website. The support team proved to be reactive (answer 25 hours after submission of my ticket), and informed me that such a problem was recurrent with the new device and was called “ghost touches”. It consists in the phone behaving as if you pressed touches and navigated (like calling contacts, turning on apps, etc.) while the user doesn’t. Simultaneously, contact touches don’t respond when the user presses them. The instruction I then received on 31 August was to "open the phone, remove the display, and clean the contacts using a soft cloth with a few drops of cleaning alcoho"l.I did, and it proved effective… for a few days.

On 21 September, I encountered the same problem, and on top, my phone abruptly restarted 5 times in 24 hours, which made me question the state of the phone when I received it. 6 months before. This is at this particular moment that I started to doubt. I submitted a new ticket (Request #386622) which was answered 3 days later: “to exclude the possibility of a software configuration issue, I recommend performing a Factory Reset”. I proceeded and, surprise surprise, no improvement.

On 17 November, while the phone was hardly under my control a good 50% of the time, I submitted another request (Request #400205) asking to send it to the repair center. This is when the ugly truth unveiled. First I was informed that Fairphone team “have recently been investigating this issue and have a solution for these ‘ghost touches’” and that “In order to solve the issue, we will need to replace your display module”. Then I was asked to choose between changing the display module myself or shipping my display module to the repair center. In both cases I would need to send pictures of the device to “verify the condition of the device”.

On 9 December, upon reception of the requested pictures, the support team indicates that my phone “has suffered physical damage, as it appears to have oxidation marks (water damage) and internal scratches. Therefore the manufacturing warranty on it has expired” and that “The costs involved for a repair might be covered by a personal insurance, so I recommend you check that with your insurer”

Needless to say that besides consulting my phone at times when it was starting to rain, I didn’t forget it in the pocket of my bathing suit or in a pair of trousers before turning on the washing machine (see pictures attached that date from today)

I don’t have a brand recommendation unfortunately, and I still have to think about another alternative, however keep that in mind…

Welcome to the forum, and thanks for sharing your story.

Water damage unfortunately voids the warranty of most electronical devices. Can you rule out that the phone suffered a water damage?

Absolutely - you can check for yourself! This is non-sense! 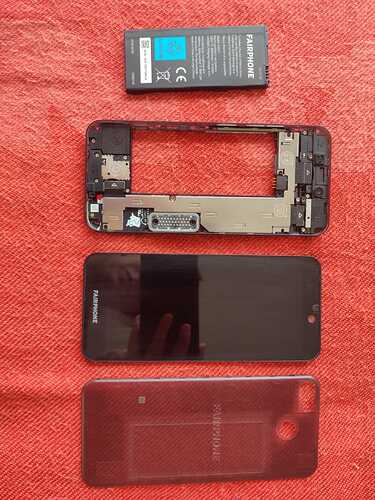 I believe they looked at this mark: 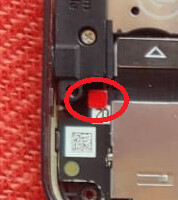 It should be white, not red.

So sorry, having to read that.
It’s a sad story for sure and I guess, Fairphone should replace the display, when you reported ghost-touches at the end of August already.
Had you known, what was to come, you could have made some pictures then. Possibly the traces of water damage / corrosion came later. Maybe they were even caused by disassembling the phone for cleaning.

If that’s the case, they have to work on their processes for sure, because they might have laid the course for this seemingly water-damage.

And what really get’s me is the fact, that he problem reported three months ago is a well known one to Fairphone. Once they know the cause, they should exchange all displays that experience those troubles without further ado. Even if there might be one or the other single fraudulent request.

In my humble opininon, the damage a support policy like the one in this case can do to the brand image could be devastating.

I am not a lawyer.

A moisture sensor in such a exposed position in a fairly open construction is worthless.
You are experiencing a common problem and this sensors are a easy way to decline warranty claims.
Apple had aggressive sensors built in and denied warranty by claiming water damage.

I understand that remote support will check the sensor and react according to guidelines.
But if it was triggered by normal use first try to get someone with more authority to decide how to proceed and look for help from consumer protection office or a lawyer.

If the problems you experience are occurring with “dry” phones too they should definitely respect your claim.

Honestly, I have no idea. I was just comparing photos to find an indicator for water damage, and the red mark caught my eye.

The German test magazine “Stiftung Warentest” claimed the water protection for the FP3 to be insufficient:

Translation of the relevant paragraph:

“The testers were particularly disappointed during the rain test: after a small shower, the cell phone gave up and could no longer be switched on. Although the technology on this smartphone is much easier to repair than on other brands, the experts said that this circumstance ‘cannot be considered particularly sustainable’.”

Luckily I’ve no intention of using it in a shower, but the report is very disturbing and part of the problem with a modular design and dozens of contacts, rather than soldered components is there are a lot of places where dampness could start corrosion and once stared it is like a tanker, not so easy to stop quickly. On that basis more waterproofing is necessary but with a pick off back cover etc. I don’t see how this can be achieved. Some inner membrane maybe? I’m hoping the green case I bought to the FP3 will keep it a little more isolated from the damp.

Maybe there should be an inner module to absorb dampness which can be removed and dried?

That seems like a long time on each occasion to have to wait for a reply. If it wasn’t a fairphone you could just walk into a shop and get it sorted straightaway. They can’t expect people to hang around waiting for a reply that long.
I tried to recycle my old fairphone with fairphone in the summer. They said I would be sent a label to attach to it but I never received one.

They can’t expect people to hang around waiting for a reply that long.

Sadly they appear to