I have gotten in touch with Fairphone Support (if only so I could get a quote for how much the repair would cost), but it really does appear that they’re swamped with Fairphone 3 support requests. I have yet to get an answer from them.

Thanks so much for all your help today!

Update: I’m on another PC, and have tried with 4 different cables.

There was a promising moment where the PC indicated an Android device had been connected to the PC, but I clicked away from that screen thinking I could now flash the Fairphone update. It was not to be, and I haven’t been able to get this new PC (and the several cables) to recognize the device again.

I downloaded the Android SDK Platform Tools, but it doesn’t list any device when I input the command fastboot devices. (It doesn’t seem that I have to do anything beyond run cmd as admin and type fastboot devices from platform-tools.) 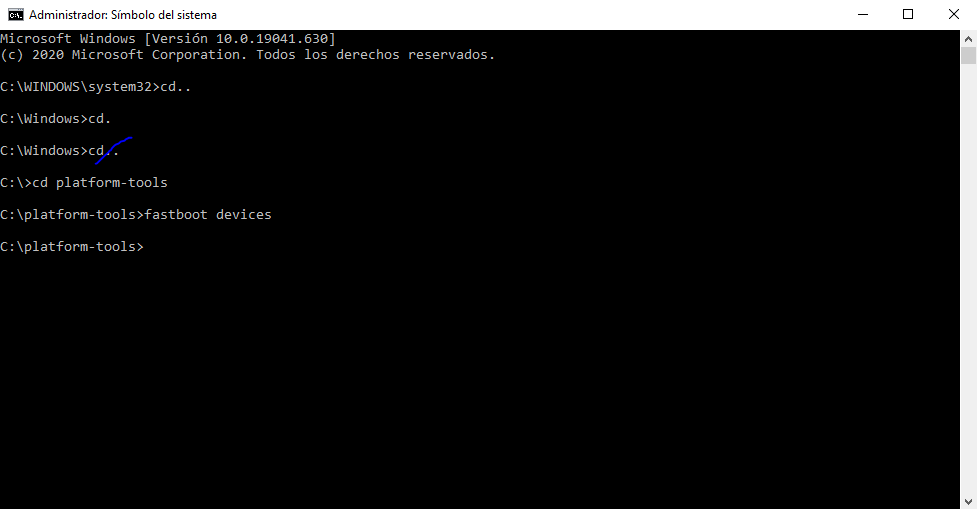 I have no idea why my phone can’t be recognized by PCs… It’s been an ongoing issue and I ended up buying an OTG with a card reader so I could move data through the SD card. But obviously, that doesn’t work when TWRP is in read-only.

as the fastboot command does not find any devices on your system, you may also want to check these two things (if you haven’t already done so):

For me, fastboot always worked well in the past, so you might not be far off.

Trying to install /e/OS on FP3, but it hangs on fastboot on Windows 10

I’m on another PC

the PC indicated an Android device had been connected to the PC, but I clicked away from that screen

Did you receive a message on the FP2 display to grant access from the PC with a certain MAC address? Google for “revoke USB debugging authorizations”.

Did you receive a message on the FP2 display to grant access from the PC with a certain MAC address?

This is for ADB accessing the phone, it should not be necessary for the fastboot command to work in Fastboot Mode.

But to get fastboot working, you need ADB…
Edit: OK, lesson learned:

If you have booted into the recovery you can use the Menu of the Recovery-System to reboot the device into the bootloader.

Hi all, I am experiencing the exact same problem. I have tried those several points that Aitziber tried without success before stumbling over this post. My phone won’t be recognized either by my laptop. I tried another PC as well. They all would run on Linux so I was wondering whether that could be the cause for the phone not getting recognized but it seems Aitziber tested on a Windows system too… (though I never even got that far to see anything recognized as Aitziber did) really stuck with this issue and my phone is out of order for 4 days now already - ever since I attempted to install the latest update. There must be a solution, it would be incredibly frustrating if an update was to essentially trash a phone.
I really feel this is the end of the rope since I tried to wipe pretty much everything, tried to install an OS by hand by putting it on a micro-sd card then copying it to the internal memory and tried installing it - but there I get the message: “zip signature verification failed”. Thanks for any hints on what to try further!

I tried to wipe pretty much everything, tried to install an OS by hand by putting it on a micro-sd card then copying it to the internal memory and tried installing it - but there I get the message: “zip signature verification failed”. Thanks for any hints on what to try further!

Since you wiped pretty much everything, please follow this guide, don’t skip any steps, and report at which point you run into a problem …

You get this from TWRP?
You will have to disable zip signature verification when flashing some zip files (e.g for a custom ROM). See an explanation here.

Thank you for the quick reply!! But unfortunately I had found that already in the forums… the checkboxes, both in the install menu as well as the general settings in TWRP, are unchecked. So in theory it shouldn’t perform a zip signature verification, yet that is the error message I get in TWRP. I have found that others have this problem too. I am trying to install a different TWRP version hoping that will fix the problem. If so I’ll report here of course.

Thanks so much but you bet that this is pretty much the first thing that I had tried. As the phone isn’t recognized by the PC (same issue as the person that created this thread) that guideline is of no use to me unfortunately. I tried to install the OS zip file directly from a micro-SD but without success yet (as reported). But I am hopeful to solve this by manually installing another version of TWRP. So if I am successful maybe we can augment this great guideline you compiled with a scenario where fastboot doesn’t work (since the device is not recognized).

I tried to install the OS zip file directly

So if I am successful maybe we can augment this great guideline you compiled with a scenario where fastboot doesn’t work (since the device is not recognized).

I’m always in favour of whatever works, but since fastboot is the “last line of defense” when things go wrong, there has to be a way to get this to work.

Are you certain the phone is booted in Fastboot Mode when you run fastboot commands?

Thanks for being persistent, it gives some confidence that fastboot really should work so here the details of my attempt.

I recognize the fastboot mode by the blinking blue led and the fairphone logo displayed. I entered it both, from the TWRP (there is a reboot option that brings the phone directly into the fastboot mode) as well as by pressing volume - .

I used all fastboot that I found available. First the one that comes with the Linux repo [fastboot version 1:8.1.0+r23-5]. Then the one in the Fairphone OS zip archive (though accessed via flash-for-unix.sh, I can’t run fastboot directly, I get an “Exec format error”, somehow it doesn’t seem a suitable binary file to execute directly, thus I cannot inquire for the version either, but it is from fp2-gms-19.11.2-manual.zip) and the one downloaded Android SDK Platform Tools per the suggestion of the guideline [fastboot version 30.0.5-6877874]

None of these have found the phone. I did test these with twrp-3.3.0-0-FP2. I am wondering now whether the TWRP version matters? Does TWRP interfere in any way with fastboot or are these two independent things?

Regarding the attempt of installing different TWRP versions: Installing TWRP 3.3.0-0-FP2 did not solve the “zip signature verification” problem. It did remove the “unable to find partition for path ‘/system’” however. So it really seems that that is not the problem and one can safely ignore it. So also this route is still unsuccessful.

– Correction: I actually get “Invalid zip file format” not anymore “zip signature verification failed” since I installed the different TWRP. Apologies for not checking carefully. I did check the md5 and it is correct on the SD-card. Will do some more research on this error.

Good mention. Did the cable work for data connections before? There are cables out there which are only wired for charging, not for data.

Does TWRP interfere in any way with fastboot or are these two independent things?

TWRP is recovery mode.
Fastboot Mode is this:

I recognize the fastboot mode by the blinking blue led and the fairphone logo displayed.

The fastboot command only works in Fastboot Mode. It doesn’t work when TWRP or any other recovery is booted.
So the question still stands:

Are you certain the phone is booted in Fastboot Mode when you run fastboot commands?

And this, too, concerning the OS file you try to install with TWRP:

If it’s fp2-gms-19.11.2-manual.zip, this is not made for installing with TWRP and will not work in any TWRP version.

Thanks for the quick reply! Just to be sure: I definitely boot into Fastboot mode and that’s when I test the fastboot shell command. As I said, I know how to identify it. I was just asking about TWRP to be sure that the version of TWRP I have flashed on my phone does not somehow interfere with fastboot. And I take from your reply that it doesn’t matter which TWRP I have installed since they are two fundamentally different modes and don’t “talk” to one another.

Re cable: I have performed file transfer with it numerous times and also very recently.

Thanks so much for the last point re fp2-gms-19.11.2-manual.zip that it is not suited to be installed with TWRP. I had followed this guide but it seems that a zip file must have a certain structure as I found mentioned here. In the mentioned guide I am referred to use the zip file from here. I then also tried the versions OS 18.04.1 and OS 18.09.2 found here. I guess needless to say that I get the exact same issue.
Do you know where I can find a zip file suited for installation via TWRP? I am skimming the net but not sure what to search for.

Solved solved solved!! Just to be sure I borrowed another USB cable from my neighbor and now it is recognized! Oh my! No idea why it didn’t work with the other one since it always worked (I had even changed the FP USB module because that had some issues, sometimes a little loose contact so that it wouldn’t even charge). Anyhow, thanks so much for the support and bearing with me!!!