We are happy to announce that the October software update is ready for your Fairphone 2. It’s named Fairphone OS 17.10.1.

As you may notice, this release is earlier in the month than usual; it’s part of our continuous effort to give you the latest security patches as soon as possible.

We also released its equivalent Fairphone Open 17.10.1, our open source version of Android 6.0.

You want to help us test software updates in advance (Fairphone OS and Fairphone Open)? You can do so by applying for the beta testing program. 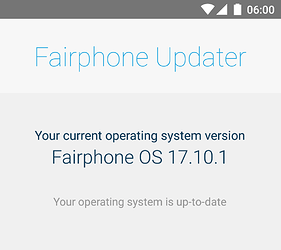 Update seemed to go through without problems.
Right after reboot (and updating all the apps) the right side of the screen stopped working. Tried multiple reboots to no avail.
Phone starts up fine, but is unusable, since I cannot enter secutiry code.

Have you tried to dis- and reassemble the display? Did you remove the battery for some minutes? However, it’s hard to assume a context between the update and the malfunction of the display.

Thanks again guys, for keeping my FP2 up-to-date and secure!

Tried the disassemble. Will try to remove the battery for a few minutes.
Haven’t used the phone since june. Just got it back from service due to a broken display, so was hoping to get to keep it at least for a few days…

Might be that the broken display issue is not resolved after all. But it did work before the update.

The update went not so well: My SIM card is FR, I am Working in Switzerland and since the update I have no roaming network accepting to register my phone.

it was working fine this morning before the update

I assume you have established a sync to an exchange server. I have no experience with IMAP accounts at commercial providers. Normally, the exchange’s admin provides policies which have to be accepted by the syncing device. I see some possible explanations:

For me I delete and reestablish my local exchange account from time to time an it works fine. But my corporation has no limitations as your corporation seems to have. Since there are many, many Android users using exchange sync, there should be a solution. Ask your admin at least!

Have you tried the following:

I have updated my phone yesterday to 17.10.1. Now I have following issues which are really annoying:

Is there a way to fix this issues? If not how can I return to the version I used before?

I believe I have a battery drain now. It seems wifi stays active even it is switched off in the setting. Do other people have the same problem?

Does your display behave normally? You can test it via Maintenance -> Checkup -> Drawing. Can you draw everywhere on the display?

This sounds like a hardware defect… Please test the display with the Checkup tool and contact our Support team if necessary.

I tried with my old shattered Display (still working properly before the update) and with my new Display (that I received just recently). When pulling down the menu on the top it still says “no new Messages” ("Kein neuen Benachrichtigungen). Also, when trying to use the the circle or the square on the bottom, the Display reacts by enlighting the square/circle but it doesn’t react any further.
I can draw everywhere on the Display - but can’t get out of the drawing mode anymore.
Today I cleaned the contacts of the Display module and the contacts of the phone, I also removed the battery for about 30 minutes but all this didn’t help at all.

hi, finally problem solved: my administration was so kind to grant me an exception for my device!

I admittedly was a bit reluctant first to install this update, after reading of the problems in this thread.
But it worked just fine. No problems. All buttons still functioning as they are meant to be.

Thanks @BertG for reporting back. Same as you, I was a bit in doubt about updating. So thanks for trying before me.

Update also worked fine for me.

Congrats & big thanks to the Fairphone team! Iirc this was the quickest monthly security update for FP2 ever. Great job, guys!

as suggested I checked the display with the checkup tool. But like Claudida the display seems to be ok. My phone shows the same behavior as described by Claudida.

I am not sure if this is a hardware defect. As display seems to respond properly.