My Fairphone developed exactly this issue after upgrading to Kola Nut 1.8 (I have now rolled back to Chenpi 1.5, which appears to have solved the problem). I noticed that when I first charged it after upgrading, the red LED changed to green when the charging indicator hit 98%, rather than 100%, and the phone was hot to the touch on both sides, towards the top end. Within half an hour the charge had dropped to around 80%, and was distinctly warm just sitting in my coat pocket.

I powered it off to let it cool down, and half an hour or so later switched it on again, and it heated up again without any usage (no calls, no internet or mobile data use). The battery charge had dropped to around 30% within 5 or 6 hours.

I realise there have been many issues raised specifically in relation to the Kola Nut OS, and that the roll-out has now been postponed, but haven’t spotted this issue other than in this post. I will be staying with 1.5 for now.

Please report back, as soon you have installed the revised update (called 1.8.1???), to let us know, if the problem persists.

Greetings,
This is my first post here, sorry if I don’t use the correct topic.

I have the same issue with my battery here since I upgrade to 1.8 Kola Nut, but didn’t notice that much if heat.

Heat is absent in idle mode and moderate on use, couldn’t even say if it is hotter than before the update, but one thing is sure: the battery gets drained WAY more quickly than before : after one day of regular use (short calls, quick web surfing, some gaming in the metro, lots of idle) I get dropped to 30% battery, while I was at ~65% before the update with an identifcal daily usage.

See @Marco’s thoughts on this:

it will take a while for sure - unfortunately we do not have a planning yet. I do not think it will be rolled out before the end of this year - this is a personal statement - not official, because I do not know.

@Bix If you don’t want to wait, you can still do a downgrade to Fairphone OS 1.6 manually.

The phone gets warm on random intervalls, using lots of battery at the same time. I often tried to check the battery usage when it was warm, and often it showed that mobile phone standby was using up 50% or so of the energy.

My impression is, that “getting warm” often starts, when the phone is moved out of the range of a wi-fi network and therefore has to switvh to mobileedata connection. Somtimes when connection to a good wi-fi signal again it cools down but not always. It happens too random it really be sure.

Restarting the phone does not help (FP1U). 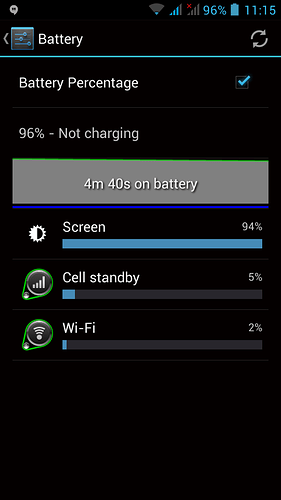