Hello! this is an update of my first post , I just want to leave in the forum some feedback about the products I am using right now for anyone who may need it.

First, the phone itself. I like it! I like the design (not the front tho), I like the built quality and for a normal daily use it’s ok. The speaker sounds good and loud for my taste and the screen is nice and bright. The conectivity part is well covered with Bluetooth 5.0, NFC and dual-band WiFi. It is not a phone aimed for heavy Android users but it can do the job, besides it starts to heat up quite fast. My unit restarted itself sometimes randomly and the fingerprint scanner is quite sensitive but I hope this can be fixed via software updates.

The charger and the cable . The built quality is nice and they work well, so far so good!

The wired earbuds , at first I received ones (for free) that were badly tuned, the left one sounded higher than the right one and the bass was too heavy… but I contacted the support team and they sent me a new pair for free, and after changing the eartips to the right ones for me I have to say they aren decent, the sound is ok for this kind of earbuds. I love that the cable can be changed because I had the problem of headphones not working properly due to the cable more than one so, nice touch.

The case , I’ve been using it for some days now and I like it a lot! It feels smooth in my hands, it gives a solid touch to the power and volume buttons and of course, it protects the phone.

The screen protector (blue light filter version), I bought two of them (one unit per package) and they came with the “tools” needed for installing them and the process itself is easy for anyone to install them as usual. The colors of the screen doesn’t change too much due to the filter and the screen feels responsive as it used to be, and besides I can’t prove it I think the filter will do its job. I have to add the glass reflects the light as a purple shine, nothing strange.

My opinion in general, “I like the goals of Fairphone and what they offer, that’s why I bought all of these directly from them… but I have to say that the phone itself and its accesories are rather expensive. I now being fair and ecological nowadays comes at a cost but things like the earbuds and the screen protectors are quite expensive for what they are, even with that in mind. It would be nice if for the next generation they improve the screen (the ratio at least, I don’t need to have an OLED one) and the performance of the phone alongside its storage for the actual price, in this case to pay 450€ to 500€ for an smartphone will be fair enough.” 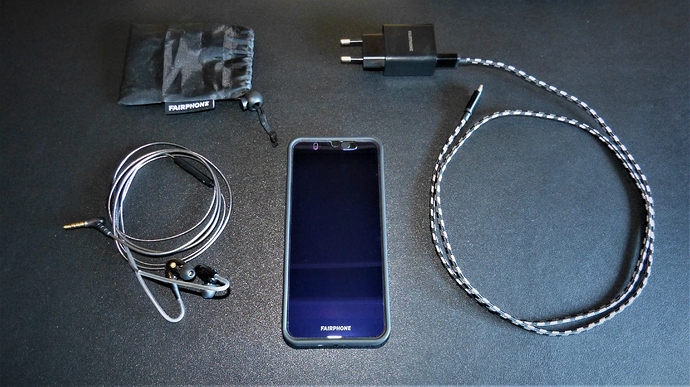 PD: you can find the camera cover for the phone on Amazon by the brand of CloudValley.