As this only a user forum, you should address your question to the Fairphones support team:
https://support.fairphone.com/hc/en-us/requests/new

The phone is new and battery under warranty, so I dont see any urgency here, as they will have spare batteries for warranty cases and a second battery might be nice to have, but I dont see that for this reason they would need them on stock at the moment.

Many people will, like me, have bought a Fairphone 4 precisely because it was advertised as capable of an immediate battery swap in circumstances where no charger is available. This problem is best aired on a public forum so the manufacturer gets its act together. Whether individual purchasers have acquired the phone for other reasons, or whether they can offer work arounds, is beside the point. So please Fairphone make spare batteries available as promised.

Repeating here will not at all help you as we are users like you and have no influence at all. So its still best addressed to Fairphone Support and not here.

This problem is best aired on a public forum so the manufacturer gets its act together.

You may be right, you may be wrong or it could make no difference.
a) It has been pointed out that your concern would be best made to Fairphone ~ you clearly disagree

b) Airing your grievances publicly can be useful, where many of the public feeling disenfranchised ~ but this is not really the case it is ??

If you had contacted Fairphone with your ‘wants’ and received a specific reply that you considered this forum would benefit from then it may make sense to post it here ~ but this is not the case.

Are you really desperate to get another batter? If so just explain your situation to Fairphone and they may be accommodating. Explain for instance that you are off to the jungle or somewhere remote, if in fact you are, and a spare battery would help you feel more comfortable and secure.

Note a second battery is not designed to be swapped regularly as the phone and the battery communicate about the state of charge. The phone may not get the charging and monitoring values for each battery separated and you may experience issues if you don’t either calibrate or allow one battery to settle in for maybe a few weeks maybe.

So how long have you had your FP4 and do you actually have any problems with the battery ?

What a pity that Fairphone isn’t being given the opportunity to respond itself to the evidence that its advertising was misleading. Some other smartphone providers use similar tactics of removing posts criticising their products and swamping them with posts from tame supporters. The question is why no Fairphone spare batteries are available six months after the phone went on sale.

BTW Fairphone is not the first manufacturer to provide a phone with swappable batteries. I still have a Samsung Note 4 and bought a new battery for it recently. Also, batteries do not have to be calibrated in the phone. Calibration only affects the accuracy of the % charge indicator: it does not affect the charge that the battery will hold or its performance. Calibration is generally not advisable because emptying the battery and then fully charging it to calibrate the meter actually damages the battery. Plenty of info on the web on this topic.

What a pity that Fairphone isn’t being given the opportunity to respond itself to the evidence that its advertising was misleading.

If you would contact them as suggested, they would get the chance.

Overall, I dont think FPs aim is that everyone buys a battery without an urgent need as this is not in line with their aim to reduce the use of resources.

Some other smartphone providers use similar tactics of removing posts criticising their products and swamping them with posts from tame supporters.

It doesn’t seem to me that your post here did get removed or did it?

You won’t find only tame supporters here, just search the forums for previous discussions / critic concerning the different Fairphone models and Fairphone as a company before jumping to conclusions.
It’s just not helpful to yell at the community who has probably the same level of insight as you.

And please let us know the response of Fairphone support, as others might be interested in that information as well

It has been said but maybe you haven’t understood, this is not a forum run by the manufacturers.

Added
I do note that the batteries are ‘temporarily out of stock’ that is to be expected from time to time and of course Fairphone do not control production and import viability. You could ask them how they are getting on, but then that just takes more time and slows down answering other queries they are handling

I think you could be a bit more patient, I’m sure you will be able to get a battery soon.

evidence that its advertising was misleading

I’m sure that FP is doing their best to have always all parts on stock (or do you see any reason why they shouldn’t as they obviously could sell those parts and so make money with them)? But history shows that all parts are produced in batches - and sometimes it’s difficult to have the appropriate amount of parts on stock until the next batch arrives. It has always been a challenge and the current crisis of the supply channels will for sure make it even harder.
So I think it’s a global effect in all areas of business that people will nowadays often need a bit more patience…

If you are keen to get a battery you can try a third party until Fairphone get more stock. 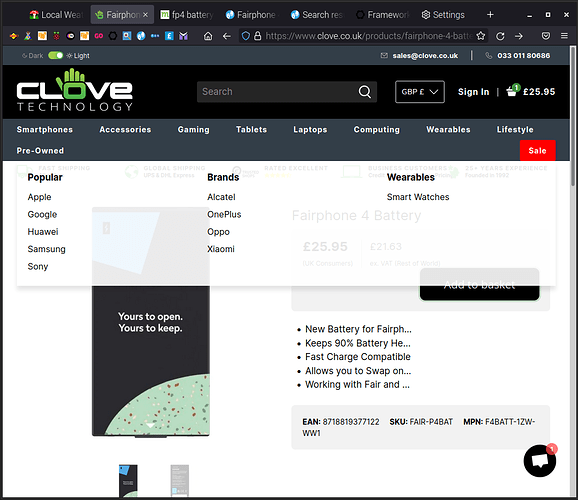 Actually Clove do NOT have any stock. Their advert is misleading. i ordered from them weeks ago and they are holding my money until they get stock.

I am surprised that so many people think it is acceptable for a manufacturer to advertise that its smartphone can swap batteries for extended operating time but then fail after 6 months to produce the necessary spare batteries.

Perhaps Fairphone’s claim to be eco friendly has blinded its enthusiasts to its failure to comply with ordinary trading standards.

If Fairphone let me know their plans (if any) to supply spare batteries I will indeed publish them.

advertise that its smartphone can swap batteries for extended operating time

While I do agree with you that you should be able to easily buy an additional battery (if the supply chain allows it), I can’t find extended operating time (or similar) mentioned on the product page, even if that is of course a valid use case. They mostly mention easy repairability.

I don’t know if they have some spare ones reserved if you need it as an urgent replacement, you’d have to #contactsupport to get that answer.

Perhaps Fairphone’s claim to be eco friendly has blinded its enthusiasts to its failure to comply with ordinary trading standards.

Just because not everyone shares your outrage over something that is neither within our control nor we have more insight into doesn’t mean we blindly follow this company here. Please take your accusations down a notch.

If Fairphone let me know their plans (if any) to supply spare batteries I will indeed publish them.

I have a powerbank which I charge with solar energy from a Waka Waka.
I find this a easier way to charge the battery without the hassle of changing the battery when I am on the road.
Perhaps o possibility for you?

I have used a powerbank for years, ever since devious phone manufacturers began gluing in batteries. But this does not deal with my question.

The point is that a smartphone with similar specification to an FP4 is available for around £200 less. Conversely, for the same price as an FP4 there are numerous phones with much higher specifications, at least one of which has a battery that can be replaced as a straightforward diy project by anyone (like me) with experience of microelectronics. So the question remains why would anyone pay £200 over the odds for a phone that only pretends to have a swappable battery capability.

It is not possible to ask Fairphone whether or when they will sell spare batteries for the FP4 because this question is not accepted by their customer service.

So the question remains why would anyone pay £200 over the odds for a phone that only pretends to have a swappable battery capability.

Fairtrade that’s what Fairphone are promoting
Fair mining practices ~ The Fairphone people got the first fairly traded gold on the market, before they embarked on the phone.

Secondly they had to find a factory where they could work out a fairer wages for the line workers. Then realising how disproportionate that may make some workers pay all the workers in the factory were paid the higher wages irrespective of which phones they make.

So your £200 phone is cheap. Cheap labour supported by Fairphone users.

You keep going on about a supply problem with batteries. I’d hate to hear the complaints of those that do the actual manual labour in China even where manufacturing the Fairphone let alone your cheap ones.

It is not possible to ask Fairphone whether or when they will sell spare batteries for the FP4 because this question is not accepted by their customer service.

Of course they will, where do you get such crazy ideas. No one can tell the future except in what they do as a person. I can decide my indulgences and consumerism not another’s.

I am so confident that Fairphone are just waiting for the supply chain to work, which as you may know is fraught with challenges specific to these last few years that if they don’t I’ll give you a bottle of Organic Fairtrade rum at £32 not some cheap £10 bottle.

Looks like you may enjoy that with all the stress you seem to be going through.

Bob the Badger hey? By the way I’m Freddie the Fox

Oh and it does have the capability, you just don’t seem to accept the delay nor have, patience nor the stomach for the disappointment when you don’t get what you want when you want it. I’m not even sure the rum would help

Hopefully the battery will be on the market soon and you will be a happy Badger.

a phone that only pretends to have a swappable battery capability.

You haven’t yet explained or detailed your urgent requirement for a battery.

What’s up that makes you so unhappy?

I understand the excitement about non-deliverable batteries a little bit. I am a burned child, so to speak: I owned a Jolla 1, where the battery could theoretically have been replaced if Jolla had had some on offer (there was once a small batch that was sold out within a few minutes).
But this whole discussion slides into absurdity as long as @BobtheBadger doesn’t

Maybe the thread should just be closed, this aggressive mood is hard to bear.

By the way: if the request to support was written in the same tone as the posts here, I personally couldn’t even blame the staff there if they didn’t feel like answering… However, I suspect that professionalism would force them to do so.