I purchased a Fairphone 3 just 1 month ago. I installed various apps that lets you regulate manual camera settings but I noticed that the maximum shutter speed possible with the camera is 1/2 seconds.

Moreover I would like to ask you if someone of you has tried if the camera+ module of fairphone 3’s has a longer shutter speed than the 1/2 seconds of the regular modules.

Hi, shutter speed depens on CPU, that has the task to execute the whole process. FP3’s CPU (S635) is not a monster, but a quite mid range. Anyway, I bought the 3+ module some months ago and the results are awesome: better quality, better zooming and shutter is a bit faster. Many would shut me up but I can tell you … give a look at ISOCELLGM1 48MP spec on official site (link below), on Wiki you can find all the phones with SAMSUNG’s sensor (link below) and at last I paste a review from devicerank.

This is the sensor of FP3+: Improvements are higher that expected.

My understanding is that the ISOCELL has it’s own shutter abilities and doesn’t depend upon the CPU?

CPU moves all the engines. But yep, sensor can improve the shutter speed, anyway the more improvements can be achive with a better CPU.

The electronic shutter speed is limited by the rate at which the camera reads the image data from the sensor.

For most CMOS sensors, and therefore most regular DSLRs, the camera reads image data from it progressively, rather than reading all the image data instantaneously. As it reads, it resets the data held by those pixels.

If this process takes, for example, about 1/120 of a second to read the whole frame, this is the hard limit on the speed it can use as an “electronic shutter”.

You do mean lengthen the exposure time rather ‘increasing the speed’ meaning a quicker and therefore shorter exposure??

My aim was to find a way to lenghten the exposure time for the Fairphone3 from 1/2 seconds to ex. 30 seconds.

I came from LG G4 that has got this capability (exposure range from 30 seconds to 1/8000 seconds) and it runs a Snapdragon 808. I don’t think is a question of CPU but instead just a minimal programming modification.

I also tried to contact the fairphone’s support 1 month ago but unfortunately none reply.

Or if someone of you have tried the “exposure magisk module” to increase that exposure time.

I don’t think is a question of CPU but instead just a minimal programming modification.

Yes I would imagine the same

I also tried to contact the fairphone’s support 1 month ago but unfortunately none reply.

From experience and other posts Fairphone support is very laggy and your request is probably way down their list of priorities.

By the way way would you want 30 secs, and if you have used such long exposures do they really work. I don’t know enough about the sensors so I wonder if they can collect an increasing amount of photons over 30 seconds and store it as voltage effect ??

I recommend you look into the thread on the Google Camera port for a confirmed stable port of Gcam. (I recommend Urnyx05 7.3)

Wanted to report that I’m using the Urnyx05 port, version 7.3.018. I don’t use this as my main camera app but do switch to it whenever I get image quality that I’m not happy with in the stock app. If you want to download this too, I recommend you spend a few minutes on the site to gain some information about the ports. There really are a lot of options out there. I ended up choosing one based on its release date, and that it was marked as “stable” by this website.

They have a night photography mode which increases the maximum exposure time, albeit through closed software.

I’m not an expert here, but I imagine that with long exposures, it’s possible to just do the sums in software - provided that there is still some access to the raw data, I presume. Super long exposures are crucial in night photography (e.g. of the sky) since stars don’t emit much light themselves. A drawback is that the camera must be extremely still during this timeframe. This is why, in part, it’s usually not worth the hassle to do it on your phone, at least not without careful preparation. I’m somewhat curious to know about how good of an image you could get out of a Fairphone 3+ for night photography, even if it doesn’t seem to be the right tool for the job to me

Yes unless the subject is very still, unless of course the objective is to show the change in star position relative to the observer location.

On the idea of summing data. The software will have to store the 48Mpx clear the sensor every so often, maybe once every second, for 30 seconds ~ some storage and summing ~ 1.5G data to CPU through.

You would only need to store the last frame, so it’s not much data!

Yes summing on the back of the last figure, I’m surely loosing the plot

Yes I used to do night shots with my old LG G4 and it was a nice feature to have.

Smartphones cameras has got wide angle lens ( from 28 mm to 24 mm full frame equivalent) that in dslr are very expensive but suitable for night photography.
For example I attach you in the first photo an example of a night shot made with my old LG G4 with a 30 seconds exposure time with 400 iso, i used to place him in a stable position for the entire time of the shot.

I tried also the GCam port on Fairphone 3 and using the astrophotograpy mode. I noticed that the exposure time increases to 1 seconds ( better from the 1/2 seconds from other manual camera apps) but unfortunately the sofware decides itself autonomusly the ISO sensibility that is frustrating and furthermore 1 second is still not enough for astrophotography. I attach you a second example shot made up with a Fairphone 3 camera with Gcam port and astrophotograpy mode, as you can see the results are disappointing (it was an hand held test, but I did also still tests pointing the camera to stars but the results are not good: stars were invisible).

From that I would like to ask you if someone have experience with the camera+ module (or with a Fairphone 3 +) with night shots and if some of you has tried the exposure magisk module as it is specified into the gcam ported app. 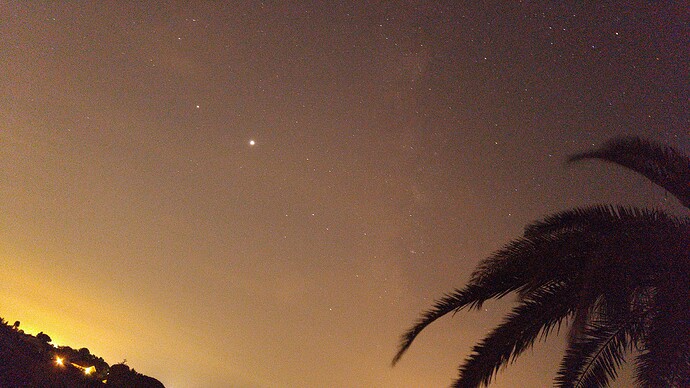 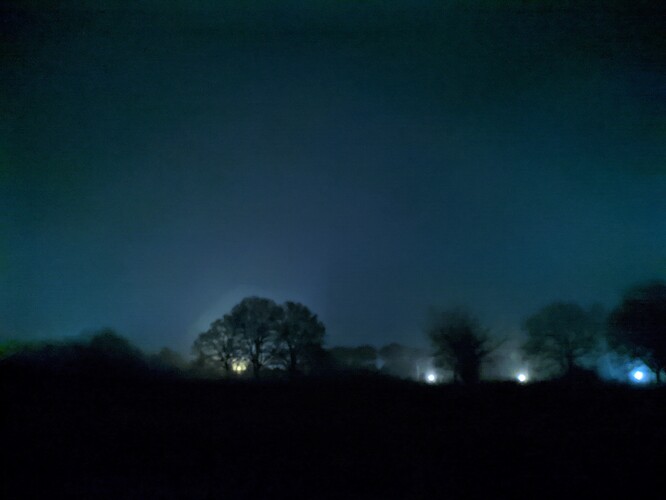 Hm, I’d recommend trying out a different port, possibly the 8.1 Nikita port… I recall the advanced settings having longer exposure times. (could it have been 16 seconds?) Turns out that the version of the port really makes a big impact on the extra features that it has. I can’t recommend this entirely, as my experience with GCam has been mixed, and after awhile the images did not save to my camera.

To answer your other question I have a FP3 with added camera + module and the longest exposure time (in OpenCamera) seems to be 0.3s. However, this may be a limitation of the Camera 2 API, at least according to this thread I found.
https://sourceforge.net/p/opencamera/discussion/general/thread/c8fc482e/

Under Night Site option > drag down the menu arrow and selecting > Astrophography the max shutter delay is at max two seconds, maybe one and a half ??

There is a timer which is a common delay before ‘shutter opens’, 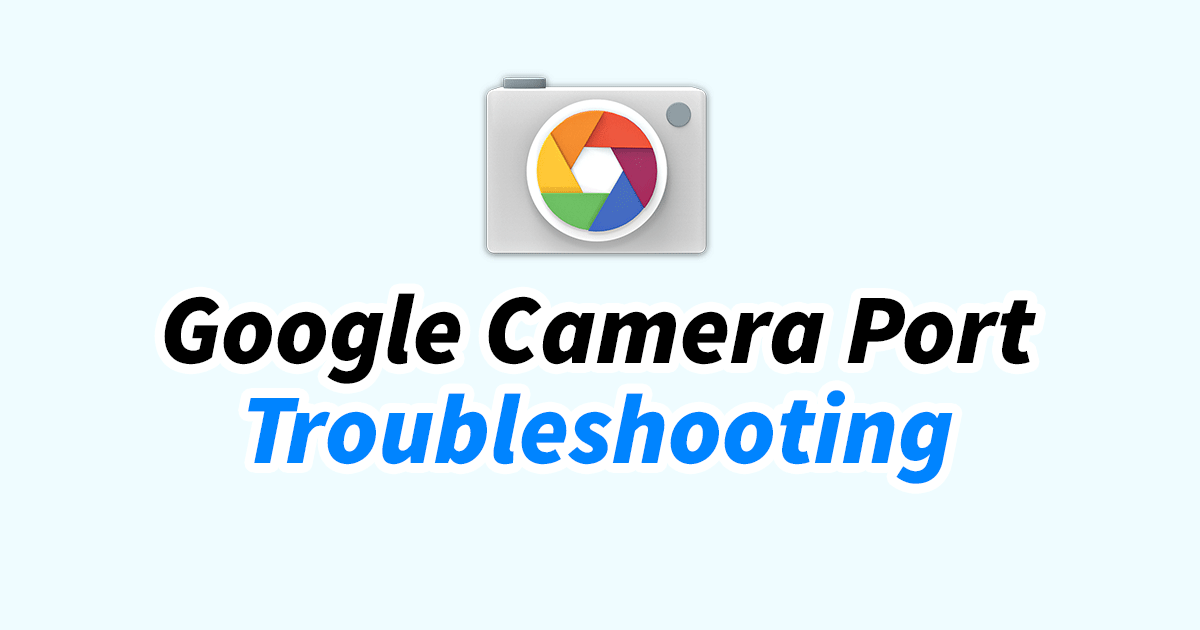 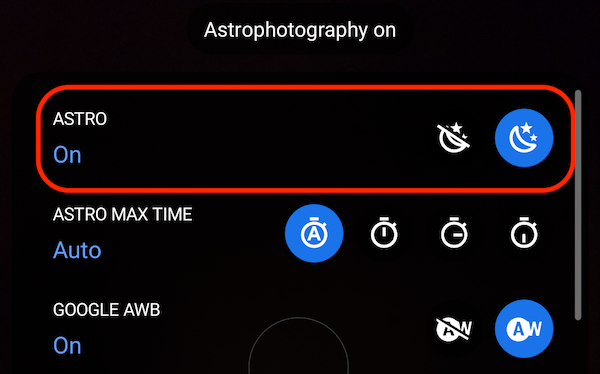 Just installed the app again…
In the settings, Advanced, there should be an option to increase maximum exposure time. It’s called ISO/Exposure Time HDR. There you should see an option for 32 seconds.
Edit: I tried this feature out by just putting my phone face down on the table (complete darkness) and it didn’t seem to actually impact the time it took the image… So I’m not sure what this does

Thanks all for the informations.

I hope that the Fairphone support will reply in future about this topic it seems to not be any way to resolve this issue.

Alright, I have one more mod version for you!

I don’t give this solution the highest confidence, just given my experience with GCam in the past (stability issues mainly), but it seems to be the only solution I know of.