The Fairphone 3 has different hardware specs than Fairphone 2 (and a newer Android version), but is there any way it has improved when it comes to “fairness”?

Fairness is highly subjective, but let’s be inclusive and say it’s all those things that makes one buy a Fairphone instead of a cheaper phone with similar specs.

So far, AFAICT, it seems to rather have regressed:

Mining, worker conditions, etc is probably the same (?) but due to lack of transparency it’s hard to know for sure.

Fairphone seems to be a lot about “telling the story” with all its messages of “Change is in your hands”, “Dare to care”, etc but I get the feeling it’s been a lot of story and little of numbers to back it up as of lately, especially w r t Fairphone 3. It makes it hard to evaluate how much “fairer” it really is, and it’s making my gut feel a bit uneasy. I don’t want to end up asking myself the question “was I just stupid enough to pay a lot of extra money just for getting a cheesy message on the back cover?”

I get that feeling. but honestly, would you rather be hopefull and be ripped off than miserable and contribute to the problem? even if we are being ripped off we’re showing that we are an legitimate market. there currently just isn’t any competition in this regard so for me that was an easy choice. i need an phone, i care a lot about the environment and people, then this really is the only real choice i have. i would compromise on almost everything for that.

(Does Fairphone even offer downloads of all GPL/LGPL software in Fairphone 3, which it’s legally required to do?)

If you take a look at the Fairphone homepage and their blog, you would have found some answers to your questions.
While it is true, that some features are deemed unfair by some users (e.g. no OpenOS - for now), there are other parts, where they have reported improvements.

This might be small steps, but the direction stays the same.
And maybe in some months time there will be a new OpenOS for the FP3 or even Sailfish, Ub-ports and whatnot.
Do some reading, and you will find much more background info, than just the message on the back cover.
That would be fairer on your side, than just asking if you might have been framed.

B.t.w. Is it really legally required to offer downloads of all GPL/LGPL software? (Really interested, as I have no clue to that regard.)

Edit: Fixed the second link. Thx @RSpliet for checking and letting me know.
Edit 2: Fixed the links to the gold-related blogposts. Sorry for the referencing to the top category multiple times.

Is it really legally required to offer downloads of all GPL/LGPL software?

GPL legally requires you to contribute back any changes you make. Thus if you use a source tree (such as the Linux kernel) and make changes to it (such as modifying internals, adding device drivers or device tree files), you are bound by the GPL to publish these changes. There are ways of developing drivers and device trees that don’t count as changes to the kernel. If you decide to develop such stand-alone components under a non-open license you have no obligation to publish their source code. As a general downside this limits the ways developers can interact with the kernel.
For GPL this also means that when you use source code inside your own software project, your project is required to be licensed GPL. LGPL is less restrictive in the sense that you can integrate LGPL components in closed source systems. There’s some blurred lines (at least in my perception) in this area because you are still able to run closed source software on a Linux-powered system. Interacting through APIs must therefore be different from integrating libraries.
Either way, contributing back to the ecosystem is definitely considered good citizenship in the world of open source software. By starting off with the Linux kernel, you literally save yourself centuries of developer time, donated by other companies and individuals. Seems only fair to go the extra kilometre by making sure your invested development years are benefiting others in return.

@BertG thanks for the pointers. English is not my native language, so I might have come off harsher than intended.

And indeed my background check missed some of those while reading some of the other, more vague posts such as https://www.fairphone.com/en/2019/08/27/launching-fairphone-3/

Looking closer at what you provided though - here they say https://www.fairphone.com/en/2019/09/10/fairtrade-gold-fairphone-3/ about the Gold, “by mass balancing /…/ we are able to increase the amount of Fairtrade gold we are buying”. What does that mean? I assume that the amount of fair trade gold they are buying is equivalent (or at least a qualified estimation) of the amount of gold that is actually in the phones? Or is the fair trade gold only a fraction of what gold is actually needed, the rest being “regular” gold mined by children under slavery conditions?

And as for the plastic recycling, I’m not sure a few stools in plastic are the best use of 3700 Fairphone cases. Seems more like a fun experiment. But I guess it’s better than burning it.

For me as well as for the planet, results matter more than inspiring words. Before buying a phone, I want to make sure the same applies to Fairphone. It’s my way of daring to care.

but honestly, would you rather be hopefull and be ripped off than miserable and contribute to the problem?

I would be more miserable if I spent that extra money on something that did not help the planet; because I could have used that money for other good things, such as taking an extra day of unpaid leave to walk in the forest and thus improving my own health.

If we are being ripped off, which I don’t think we are, but if, then we’re showing the market how easy it is to rip people off by just using some fancy website with seductive blog posts, which will in turn encourage more people to rip other people off.

Sorry, just fixed the links to the gold-related blogposts.
Take a closer look at the no 3:

Thanks to extensive discussion and creative thinking with Fairtrade and Valcambi, as well as our supply chain partners, we developed a model we believe fits the average electronics supply chain: 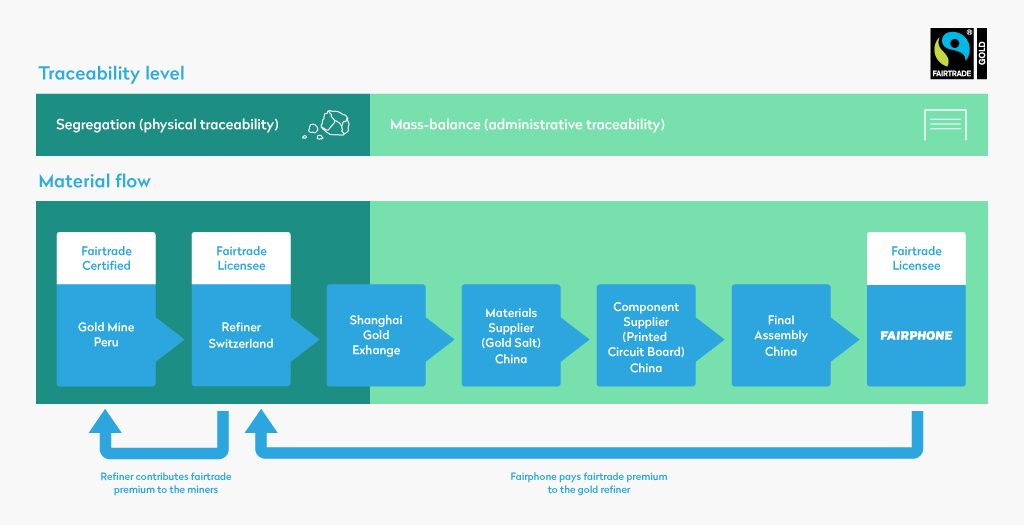 By mass balancing the gold earlier in the supply chain and paying the premium directly to the refinery but allowing the Fairtrade gold to be sold and shipped as ‘regular’ gold through the exchange, we are able to increase the amount of Fairtrade gold we are buying, connecting it to even more component manufacturers sourcing their gold through the SGE, and ultimately impacting even more people!

This seems to be a pretty straightforward explanation.

Furthermore, they publish and regularly update their suppliers list. You even can follow things on an interactive map:
https://www.fairphone.com/en/impact/source-map-transparency/

¨you are bound by the GPL to publish these changes¨ Well, AFAIK, you are not bound to publish the changes, just to make them available to the people that have got the binary code, only if they request you the code and for a limited time frame (up to 3 years).

So what I think this means is:

Gold is used in many parts of the phone, including many subcomponents. For FP2, they picked some critical parts, bought some fair trade gold, and made sure the fair trade gold was shipped there for inclusion in the Fairphone.

Is this a correct understanding?

More or less.
I think, there might just be a little misunderstanding regarding the FP2. So please forgive me, for repeating it in my own words.
The general concept is the same used for green energy in Germany.
FP pays the higher price for the fairtrade gold to the refiner. The refiner pays a higher price to the mining company as well.
Later the faitrade gold is mixed with regular gold and the gold for the Fairphones is taken from this mix. This solution ensures, that the fairtrade gold is supported and paid for, but not that the fair mined gold really ends up in the phone.
The difference between FP2 and FP3 is this:

In both cases Fairphone pays the fairtrade price for the amount of gold, they need for producing their phones.