I am using an external universal battery charger to charge empty spare FP2 battery. This was working perfectly until recently the charger stopped working. Normally a purple light on the charger indicates when a battery is installed and as soon as connected to a powersource the light turns to blue indicating it is charging. And when fully charged it turns back purple again.

But now, it does no longer indicate purple when inserting a battery. And also it does not charge at all. It does show the blue light, but it clearly does not charge. It does not matter which battery I install. Both batteries work perfectly in the FP2 and do charge with the normal FP2 charger.

What could this be? Does anybody have experience with charging smartphone batteries and came across this problem? The internet does not reveal much about this either.! 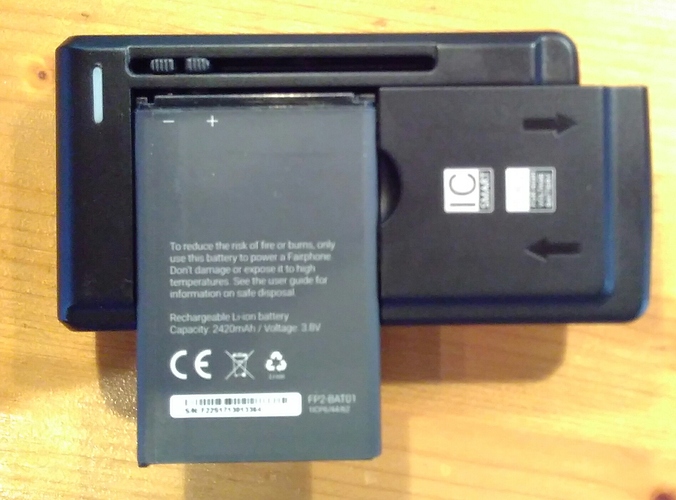 To be honest I don’t think it’s a mystery and your charger is simply broken.
At least that’s what it sounds like.

I am not sure, but in an other topic someone also owned this charger since about one year now. All I know is he maybe wanted to post his experience on longevity some day.

Anyway without any further information on the internals there are plenty of causes for failure.

The easiest would be a contacting fault as this is a charger to fit for many different phone batteries. So the problem could be the movable contact pins although you might not have realigned them often.

But for my experience many devices suffer and break due to a weak design operating to the limits of the semiconductor components often overheating and failing therefore.

Also the device looks a bit bulky I tend to believe it comes with another external power supply maybe with barrel connector.

As you write the blue led is still lighting so the psu seems to work flawless.
But within the black box no one can tell what to expect. I presume a charge controller, depending on how sophisticated the device is some kind of thermal control or security circuitry. Also fuses could be found there. Without a glance only guessing is possible…

Thanks, makes sense. I will see if I can find any bad connections.

After I found all the screws that were covered by stickers on the back of the charger, I could open the charger. Almost immediately I found one of the two connecting pins almost loose. After resoldering this pin the charger worked fine again. So, I happy to close this topic. Thanks for the input.
Cheers,
Iwijn

This topic was automatically closed 24 hours after the last reply. New replies are no longer allowed.