Can anyone tell me why this has appeared on my locked screen? It disappears when screen is unlocked. 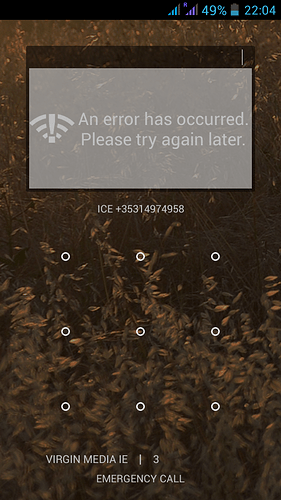 The screensaver has failed

No, I am sorry, just kidding.

I guess after rebooting the situation persists?
Did you update or install any apps shortly?

Have you checked if it always happens when the screen is locked?
Does it also appear when you manually lock the screen?

Initially I had this though too, but maybe it is just meant as an alert symbol.
The message isn´t expressive and very useful anyway. So it rather causes a lot of curiosity and guessing as you just express too.

Thanks for responding! It first appeared this evening when I was using a mobile data connection. I restarted the phone and it was still there. I’m now on WiFi and it’s still there. So I don’t think it is a meaningful alert. It occurs whenever the screen is turned on after being turned off either manually or by idling. It’s still there if I change the wallpaper. I have not updated any apps since yesterday so it didn’t coincide with an update. Strange, eh?

Yes indeed this is quite strange coming up from out of nowhere all of a sudden.

But yes, @paulakreuzer could be right here.

Long press the widget and see if you can drag it to the remove symbol on top. Does that work?

Strange thing is that it only appears when screen is locked, so doesn’t respond to touch. But the message changed to “No upcoming guests”, which had an Airbnb vibe to it, so I first tried clearing all that app’s data - no effect - then uninstalled it, and message disappeared. So something in that seems to have been the culprit. Thank you all for your engagement with this! A great aspect of being part of the Fairphone community!

You would have had to slide down the pattern so that the widget expands. Then you can move the widget to the remove button: 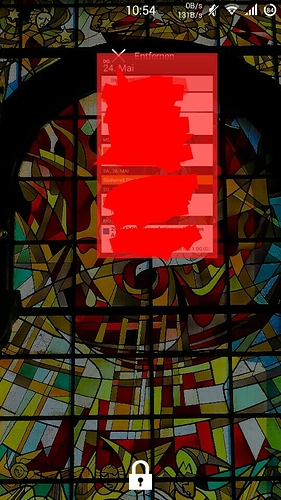