Email: “Production delays with the Fairphone 3 Camera+ and Top+ Modules”

The usual f***up from Fairphone. From my inbox: 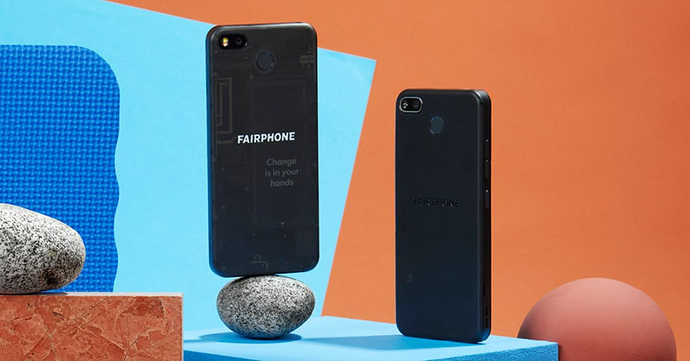 Thank you for pre-ordering the new modules from our website.

We are getting in touch to let you know that we are currently experiencing some production delays with the Fairphone 3 Camera+ and Top+ Modules.

We understand that this is disappointing news, and would like to offer our sincere apologies. As soon as we know more, we’ll send you an email with all the latest information.

Now some good news: Android 10 is coming your way
We do have something positive to share in the meantime: We’ve started rolling out Android 10 for Fairphone 3! You’ll receive a push notification as soon as it’s available - the actual date will depend on your network provider. This update ensures your new modules will perform optimally, so we recommend installing it before they arrive.

Thanks for your patience,
The Fairphone team

I just posted the same thing so I deleted it

Same thing happened with the Fairphone 3 itself last year

I’m not in a hurry but I’m curious. How can a company announce a new product available only 2 weeks later when it’s not even ready? Did they rush the announcement for a specific reason?
They could have taken their time, nobody didn’t expect anything from them since Fairphone 3 is only one year old.

It seems to be a general problem with less experienced and / or smaller companies. A similar problem brought me over from Shiftphones… I hope that Fairphone doesn’t let me wait that long…

How can a company announce a new product available only 2 weeks later when it’s not even ready?

I’m pretty sure they did not start producing the modules AFTER having announced them. Especially when considering the fact that shipping a container from China to e.g. Rotterdam already takes more than 2 weeks.

Probably far more people have already ordered the modules than expected, so they ran out of stock.

Edit: Short check of shop.fairphone.com tells me, that they ran out of stock indeed

Temporarily out of stock
We hope to have this product back in stock by the end of October.

Well, I think they would have told us if it was just out of stock.
What the emails says is “production delays”.

If it was a stock problem they could just say “well, you’re a lot of people interested in this product so we’re out of stock”.
Same thinf happened with Fairphone 3. It was delayed for production problems and it appeared “out of stock, will be delivered in X weeks” on the website for a while.

I pre-ordered mine while the presentation was still ongoing and was probably among the very first orderers. Still, I find this embarassing. Because it happens every single time they announce something.

Hm yes, that’s not nice. My FP history isn’t that long, so for me this is only the 2nd time that happens.

Maybe they offer a voucher again, would be a friendly gesture.

I also received an e-mail from Fairphone. It stated that my order was sent to me!

I wish the waiting posters the endurance they need and sincerely hope that it won’t be too long for you.

I think, most of the new cameras are in the FP3+. That’s why they don’t have any at the moment.

Yes, I received a mail yesterday stating the delay.
And yes, I also received yesterday a mail saying the camera’s are on this way. Delivery between 3 to 7 days.

In my opinion (just personal guessing of course) that’s the downside of the discounts they offered.
They most likely collected more orders for the new modules than anticipated, so they ran out of stock before new modules could arrive (which will be transported by rail and not by ship, if my memory serves me right).

And, with regard to “production problems”:
They are most likely still not producing in abundance with a constant stream of devices comming down the production line. So, one faulty load of parts (e.g. lenses) and a whole batch goes down the drain. As a result a new batch will have to be produced, the shipping has to be reorganised and there you go with an easy delay of maybe (pure guess) one or two weeks.
Not nice, but due to small size.

I just received the camera’s. The package was small enough to be delivered in my letterbox.`` 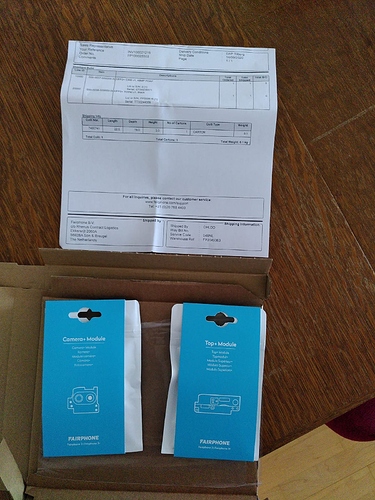 new modules could arrive (which will be transported by rail and not by ship, if my memory serves me right).

Thanks for bringing this back to attention!

I think this ecological improvement deserves to be noted every once in while.

For a reference, see the small paragraph under the big green graph in this recent Miquel Ballester blog entry:

How sustainable is the Fairphone 3? - Fairphone

I like the closing line: “Phones don’t need to fly.”

I was hesitating on wanting to buy it. In the end, I want high quality pictures of my newborn. Though I expect the difference between FP2 orig. -> update and FP2 -> FP3 to be bigger. We’ll see.

I got mine today as well. I changed both modules in my FP3 and everything works as expected. The security patch for August came also and fixed amongst others the space problem between the carrier name and the time display. Quick fix.

which will be transported by rail and not by ship, if my memory serves me right

Wow, thanks for mentioning @BertG, @urs_lesse , I didn’t know that. Also I wasn’t aware that usually these companies are flying the phones in, that’s indeed a bad joke.

“the usual f*ckup…” unmistakebly describes your dismay, and multiple * weren’t actually needed to emphasize it. as a fairphone customer since FP1 I agree that not everything has been running smoothly, and there were hickups, yes, but these don’t accumulate to anything coming close to “the usual…”.
it really pisses me off that you resort to this kind of ranting à la facebook, here in this altogether civilized and often outright friendly forum. and yes, it’s of course annoying to learn about the production/delivery delay of a mouch touted new module…

my post was by no means meant to offend long time Fairphone supporters like you. I’m late to the game, since I only joined with the Fairphone 3. And for me, every single order that I placed was delayed.

I am not used to such a bad customer service and I am also not willing accept it and to excuse bad management and supply chain control with the greater good, let alone the lack of communication and transparency. And that is because I know that Fairphone will never grow out of its niche – which I would like it to – as long as it is doing business like this.

Also, quite a few people here in the forum have already received their camera modules. Some of the orders were clearly placed after mine (which I placed while the FP3+ announcement was still running). I clearly expect a processing true to the motto first in, first out here.