If you get a fix in 1mn for the fist time you launch the GPS that’s rather good. On the FP1 it took way longer, specially the first time

I see some phones converging in mere seconds nowadays, but this is (a) not their first convergence and (b) visibly, they use Google databases of wifi and GSM signals (which was the purpose of that damned microG at the time)…

MicroG is installed in /e/ and makes it easier to use some apps. I didn’t saw improvements for the gps fix time (I use osmand a lot) from fairphone open os to /e/.
But I am now able to use some banking apps like twint that work “out of the box” and that didn’t work well on fairphone open os.
Want to add that /e/ is more degoogled than fairphone open os is. The aim of the project is to provide a privacy focused android alternative with cloud services (e foundation provides a mail and a nextcloud server for free with basic use linked to the phone e account - not mandatory, you can use /e/ smartphone without e account) to non technical users.

Hey @VolvoX if you want to post about /e/ on your FP3, please use this topic, not the one about Fairphone Open OS.

Ok, sorry, I was writing in the same time you were merging…

Created a new thread at the /e/ community in order to ask about that totally new installation instructions and whether the /e/ builds still support Treble:

The current installation docs for the FP3 build are somewhat wtf, totally different than what you know for old devices like the FP2 hxxps://doc.e.foundation/devices/FP2/install. Previously you’ve used TWRP, now you do not seem to use it anymore. ...

Previously you’ve used TWRP, now you do not seem to use it

Hi,
will the phone pass the former known security check by certain apps like banking-TAN apps?

I just think as soon as you unlock the bootloader some apps may not work cause they tell the phone unsecure.

I just think as soon as you unlock the bootloader some apps may not work cause they tell the phone unsecure.

The /e/ install instructions finish with locking the bootloader again.
And Apps don’t only judge security by an unlocked bootloader.

will the phone pass the former known security check by certain apps like banking-TAN apps?

Many Apps rely on Google SafetyNet for judging security.
There are no Google services on the phone. /e/ uses microG as a replacement, but microG always has to catch up with changes Google applies to its services. So even if Google-dependent Apps might work, this can break at any time for an unknown period of time.
If you are relying on Google-dependent Apps 100% working, then /e/ will not be for you.

And Apps don’t only judge security by an unlocked bootloader.

I am aware of that.

But I did not know thet /e/ locks the bootloader again.

I would love a google free FP3. Perhaps I ll give it a try.

So, will it be “recognized” as a Custom Rom?

So, will it be “recognized” as a Custom Rom?

Depends on the method used to detect that by the App in question, and depends on whether changes in Google services break microG, which happens from time to time.

From Fairphone’s official announcement on their blog:

When we asked the Fairphone community to choose an alternative operating system for the Fairphone 3, /e/OS was the clear favorite.

Does anyone here remember where and when this happened? I would really be curious about this.

Found this, but not sure Fairphone would phrase it like they did given it was @paulakreuzer who created the poll:

Poll: What OS(es) do you want to run on your next Fairphone (FP3 or later) The Industry

If you could install any mobile Operating system… Pt. 3 see Pts 1 & 2 The Premise: Imagine in (hopefully many) years your current phone breaks and you buy the then current Fairphone model, which has multiboot ability (up to 5 OSes) and can run any(*) OS (#dic:operatingsystem). Also all these OSes run smoothly and have all the functions you’d expect and that the philosophy behind the OS permits included. Which OS(es) would you install on your Fairphone? Why are these OSes included and others n…

If you speak french, I have made a tutorial on /e/OS.
Here : http://blog.liberetonordi.com/post/eOS

It was obviously this poll as it was mentioned a lot in the /e/ forum, e.g. here in Gaëls post 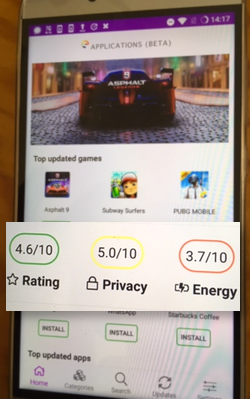 Leaving Apple & Google: next /e/ release and what features are in the pipe

We’re working on stabilizing the current /e/ beta so that we can release a V1.0 on early 2019. It will include an /e/ application repository that will let users install most Android applications, in two clicks. It will show a privacy score for...

However, we know that most /e/ supporters are waiting for an /e/ device. We are working on having a limited number of devices available preloaded with /e/ at the V1 launch. As many people would like to have the Fairphone loaded with /e/, we’re working on a limited set of /e/-FP2 preloaded.

(although more than one year later it didn’t come with FP2 but FP3).

Yeah, I remember the poll.
But that’s probably not the only thing that made Fairphone choose /e/.
As much as I like Lineage (I have 2 FP2s and one Samsung GS5 running on it in my household), it is entirely community based and relies solely on the goodwill of a limited number of people.
/e/ is a “real” company, albeit small and probably financially fragile (as is Fairphone!), with an operational team and a long term project with goals they have set and actually reached so far. It is easier to engage in an official partnership with an established company than with a group of volunteers whom you don’t know if they will still be there in a couple of years.
I’m just trying to put myself in the shoes of the people at Fairphone who realised one day they wouldn’t be able to keep up with the open source software development project and had to engage in a partnership with someone else if they wanted to keep on offering a Google free alternative OS. It’s just easier to engage in that kind of long term partnership with a company like /e/ than directly with the community.
I see /e/ more and more as a kind of software couterpart of Fairphone : the first concentrates on the software and the latter on the hardware.
Again, please don’t think I’m being critical of Lineage, Sailfish and others. I think they’re really important and necessary and I keep in mind, for example, that /e/ is largely based on Lineage. So one can’t exist without the other and the fact that /e/ exists should, in fact, be seen as a fantastic success for Lineage.

@tomgey: fully agree with all these points.

This kind person summed it up;

For me, Gael and the /e/-project seems very serious to me. I use /e/ and am happy with it. Gael is someone with experience, also an entrepreneur, so he makes things happen professionally, he is not a little programmer with 2 friends hacking in the living room…

This little programmer will happily continue on cleaning up the LineageOS 16 port.

So I flashed /e/ today. It worked flawless. My banking authenticator app is working after installing with Aurora Store. Another app for digital signing recognizes a “modification” and does not work.

But this is no problem at all.

The really “breaker” for me at the moment is the missing ability to connect to an exchange server. As far as I have seen, there is no app and also no possibility to add an exchange-account to sync email, contacts, calendar? Am I right, or am I missing something.

/e/ is pretty cool, if this will also work somehow, it would be great!

The really “breaker” for me at the moment is the missing ability to connect to an exchange server. As far as I have seen, there is no app

Afaik not in the system itself (unless you find a corporation to finance it: https://community.e.foundation/t/microsoft-exchange-support-in-mail-app-is-it-required/8888/15) but I assume you can use the Outlook app.

Works, installation was extremely simple and the bootloader is closed again, which in itself gives a better feeling.
Currently the only open question is how to get root on the system without breaking anything, because I need root rights for my firewall and anti-spam solution.

At the moment, there is no solution to the question about root in the /e/ forum: How to get root/Magisk in /e/ on the Fairphone 3?

The e documentation will not cover rooting information as it is not required for the installation of /e/OS. You can check XDA or other web forums for more information on how to root.