The ear headphone cable is the antenna…

Just to note: This doesn’t work for me. I extracted com.caf.fmradio from my Fairphone 2 running LineageOS 16.0 (so it’s Android 9.0, too), but the resulting FM2.apk doesn’t install on the Fairphone 3’s Android 9.0.
I could imagine it has something to do with FM radio being a system App … or that simply the tuner hardware isn’t there or doesn’t match … but I have no real insight.

True, I have canceled my FP3 order. The LED can only signalize the charging state, LOL. Rooting the phonewill void the warranty, so no FM Radio or install a good Adblocker…

And of course, its closed source with google apps on board.

51 posts were split to a new topic: Does the FP3 NEED an FM radio?

It is easier to make some entries in /etc/hosts

Ehm, in my very humble opinion not for everyone or to be more precise for most users.
If one has the knowledg - i.e. you - it might be true of course.

Finally, I guess it takes just some more time, before an open OS will be available. Though it’s just my optimistic expectation of course.

Rooting the phone will void the warranty,

There has been a quite lengthy discussion on this topic in the forum.
In short: Rooting does void the warranty only insofar, as the damage claimed as a warranty case was caused by rooting the phone. Any damage not caused by rooting the phone is of course still covered by warranty. (“Caused by” would of course include installing apps. that damage the phone by their root access. If that is even possible.)
The warranty therefore says

4.2 The Fairphone Warranty does not cover damage resulting from:
…
i. The Product has been rooted or unlocked.

And I really doubt, that installing a FM-radio will damage the phone.
But I doubt as well, that rooting the phone alone will solve the FM-radio issue, as the installation of the radio .apk that comes with LineageOS 16.0 unfortunately did not work for @AnotherElk

Just to note: This doesn’t work for me.

Fact is, that many people - including me - want that kind of technology for their phone (and for the home as well).

I agree with that. FM of course has its flaws, but it can be used without any time limits, and it can always be heard, even without any cell phone contract or data network, and in any “internet storm” scenario as well.

By the way, streaming already accounts for the largest part of internet traffic, which puts an incredible toll on the bandwidth of local gsm/lte/wifi/… cells, and on the bandwidth of backbone connections, which is just as bad as the oh-so-low bandwidth efficiency of FM.

Aaaaanyway… coming back to the initial question: I, too, saw the FM feature when I ordered, and it has importance to me, so I, too, am now quite disappointed. It doesn’t matter where I saw this information, because silently correcting the feature list on the FP website definitely doesn’t suffice after different information has been sent out already.

As to FP’s engagement here: Indeed I don’t expect a response to every post by them, but if there is significant confusion and irritation such as here around the FM topic, which they could swiftly clarify (why are there contradictory specs, is the necessary HW present, are there regional legal restrictions, will future OS updates support the feature, …), then I would definitely expect them to do just that.

According to @Monica.Ciovica , Fairphone will work on at least harmonizing the informations out there.

What is Eco charging mode? Fairphone 3

Hi Bert, thank you for pointing this out! I’ll make sure to share this with the team so we are aligned on the information provided to customers.

If they do so, they for sure should make it a blog entry and clarify things for current users.
And I really would love to get some information, if the FM-radio could be added by software-update in the future.
6 Likes
FairOpenIsGreat November 11, 2019, 1:55pm #66

This is called crippleware. The hardware can feature X (leds blink on messages, play FM-radio). But the manufacturer of the device (fairphone) says no, you don’t get that.

Except that Fairphone does not have any incentive to make you buy a more expensive product with those features, because such a product doesn’t exist.

They may not have any intention of doing this (I dont think so either), but they do. Other smartphones with snapdragon 632 processor have FM radio. What reason is there for withholding this feature from customers?

Every time they say anything here, they’ll be legally bound to that, so you want to be very careful with just spouting anything in the open.

They’ll give priority on issues, probably based on some kind of risk assessment (which includes the impact). The impact of a LED not changing colors or device not having FM, well, for you it appears to be the end of the world. For most users however, it is a minor nuisance at best.

And, yes, it is very likely they’re very busy right now as they just released a new product.

The PF3 servicemenu application indeed contains a FM radio test. You won’t see it though because it was disabled. A comments hint to some kind of noise issue.

This is purely speculation from my part, but maybe this is just a solvable software issue.

Did I understand the comments correctly here that the chipset in the FP2 does have an FM radio, it’s just that we don’t have drivers for it?

Not just that, we don’t know whether the headphone plug is properly wired to serve as antenna.

Can anyone confirm if “SpiritF” works on a rooted Fairphone 3?

no it does not 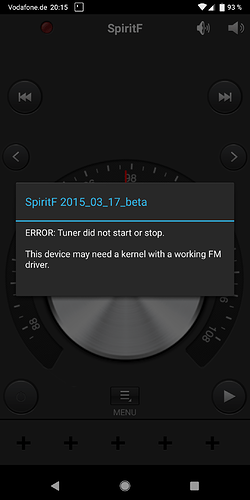 well we have the kernel sources, is there by any chances an FM driver in there that’s just disabled.
and if not. is there a phone with the same chipset with working FM chip that we have kernel sources? could simply patch the kernel to include the FM chip (if there is one, and if its not disabled in hardware / by fuse, or simply not soldered to anything)

Thanks. As this only leaves a working notification LED and “automatically stop charging at 80 %” as “nice to have” features, I’m not going through the trouble of rooting right now. And it remains a mystery if just the driver is missing or there is a hardware limitation.

The Moto G7 Optimo Maxx is supposed to have a working FM receiver as well as a SDM632 CPU. If we can find Android Linux kernel sources with a working FM driver it might be possible to port it to FP3. Again this doesn’t guarantee that it would actually work.

Supposed to be this kernel:

The Moto G7 Power has a SDM632 and a working FM receiver as well. And it seems, that the source code is already available; according to this xda-developers page: Not, that I can make anything of it; but maybe this can help as well?

well, looking at it, there is indeed a radio driver in it - enabled with CONFIG_RADIO_IRIS=y
CONFIG_RADIO_IRIS_TRANSPORT=y
under mmc adapters, which is labeled: “Driver for QTI FM Radio Transceiver”
The FP3 kernel has this driver and it is enabled. It is also referenced in the dtb tree, so in theory this should work, but when I looked at the device tree source, I could not find any pin/IO connection information related. dmesg does not report the driver initializing, which would indicate it might not “see” it’s hardware, which could mean

definitely worth looking into some more. It’s supposed to be there and there is a driver, too.

Edit: btw, yes “transceiver” - by the quick look I had, the driver code includes functions to both receive and transmit FM radio

maybe FP it was disabled for CE conformity issues

Edit: the comlete lack of any message in dmesg suggests the device tree might be telling the kernel that there is no radio, so the driver doesn’t even attempt to configure. if the device tree were saying there is a radio chip, but there isn’t, there should be an error message of some sort, which I couldn’t find