Divest OS: Everything about Divest OS on the Fairphones

So now I got myself inside the “Apply update” section of recovery and there adb worked indeed.

So as per step 8 of the installation guidelines I was following on your exellent website Bootloader - DivestOS Mobile
I ran adb sideload copy-partitions-fp4-release.zip
Then I saw a terminal scrolling on the FP4 without obvious error message and it ended by “OK”

I confirmed and it rebooted into… FPOS !?

Then I performed a factory reset and format data and rebooted the system.
Then it booted into DivestOS

I did another factory reset with data format for testing and could boot again in DivestOS.

Main camera for pictures and video recording does work normally for my use which is basic; however I did not notice an option to use wide angle camera like on FPOS. Here I show a photo taken with my main camera under DivestOS with default camera application and default settings exept that I selected a 16:9 format instead of 4:3; it has been somewhat compressed in the upload process and originally has a better definition. 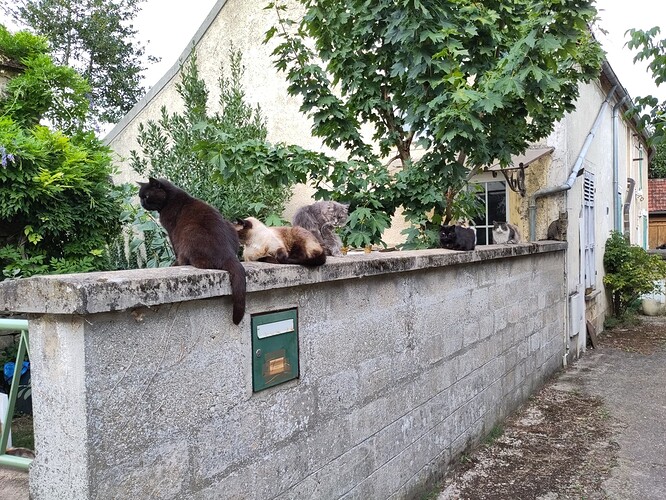 Then I got myself in the setting menu and looked for update; there was an update available named divestos-19.1 which looked strange because it was supposed to be the version I had installed however I installed it anyway and rebooted exactly in the same system.

Then I decided to try the backup software SeedVault. It proposed me to backup to nextcloud however I had no server to do it so I chose to back up locally even though the software advised against it because if my phone broke it could do nothing to save itself. In the backup options there was an item “Backup status” which was set to “never” and when I tap on it I see a list of settings and apps which are supposed to be backed up however under each is writtent something like “Waiting for backup” with an orange triangle at their right. So far I would say that SeedVault failed to make a proper backup of my system.

My opinion overall is that I can use this OS which is neat and fits my needs; it is based on android 12 and boasts good privacy compared to others and also hardened security although from what I understand to take security benefit would imply a bootloader relocking which I am currently asking myself whether I should try it or not.

Thank you for the detailed testing and feedback.

The updater will always show the latest update.
Seedvault requires the first backup to be initiated manually. The best no cloud option for backup is any old flash drive with an adapter and works well. Plug it in once a week, wait 10 minutes, and you have a nice backup.

Verified boot is indeed not enforced until the system is locked.

Thank you for the tip I did successfully backup on an USB-C external drive with SeedVault.

Now on the bootloader relocking front I did the following

My FP4 status is following
At boot I get a warning about an unlocked bootloader
At the bottom of the bootloader menu is written in red “DEVICE STATE - unlocked”
In developper options the item “OEM Unlocking” is greyed on the off position and not modifiable; under it is written “Bootloader already unlocked”

get unlock ability is 0

I wont lock the bootloader, unless there is proof that divest would not brick the phone under no circumstance (unlike all other OSes)…

Thank you for your advice ymuell; it is indeed something I was thinking I had read.
Is there a way to turn it to 1 ?

Also on DivestOS installation guide; before relocking bootloader; there is a warning that say

“On A/B systems firmware in both slots must be in sync/latest! Or else next installed update might be unbootable, and potentially brick.”

Is there a way to know if this condition is satisfied?

Please see this and following and this was not fixed yet by FP and so far flashing of any OS (even FPOS) can brick your phone. So therefore if its 0 I personally would stay safe and dont lock the bootloader, unless I’m fine with the hassle to send it in to repair center.

resetprop is a feature of Magisk to change read-only properties, so no. But installing the Magisk app and fastboot booting a Magisk patched boot.img should be enough for this to work. That’s a function declared somewhere else in the script, has been used before to flash the other partitions. It’s essentially a fancy way of saying fastboot flash foo with some error handling. ${FASTBOOT_BIN} is just a variable to point to the included fastboot. It does, that’s why we need to set ro.boot.flash…

This is a very confusing issue. Someone with a deeper understanding should compile a table under which conditions a lock/unlock/relock is safe. I’ve been following the linked thread, but I am still not sure what my combination means:
I have flashed CalyxOS, re-locked.
Now the OEM unlocking option is grayed out and my unlockability=0.
That would mean I am stuck with CalyxOS for all eternity? Even if they stop support at some point?
So if I wanted to try DivestOS now, I would still be stuck with CalyxOS?

Responded in the other topic

Thank you for reacting. I have made the suggested reading.
I am currently writing from a working DivestOS FP4 that I would like to stay with. However it would seem to be likely that attempting to relock my bootloader at that point would result in a FairBrick even though I did not find a report of it yet with DivestOS.
When it comes to computing and trying fancy stuff on a linux system I am usually not a lucky bird and that is starting to pile arguments against flashing lock.
Which is in contradiction with the fact of installing a security oriented OS. The problem seem to be FP4 related since other people have ended up in the same situation with other OS.

Dear fairphone community I am writing to you in what could be the last message from the living time of my beloved fairphone because in a few minutes I will attempt to relock my bootloader and it might very well result in it getting stuck in some other dimension.

I have commanded fastboot flashing lock_critical and fastboot flashing_lock and my phone sucesfully booted again into divestOS and also I have sucessfully rebooted two times.
However do not consider that it is possible to relock the FP4 bootloader out of the box after installing DivestOS because chances are that it will result in a Fair Brick.

The steps I followed require to extract a boot.img from the payload.bin file in divestOS zip file.
To do this I used [Tutorial] Android OTA payload dumper on Android | XDA Forums

Then patch boot.img with Magisk following Hirnushi’s method described on posts 100 to 120 on the topic

Keep in mind that I haven’t tested this, because I didn’t lock my bootloader afterwards and I can’t guarantee that there’s no possibility left to brick your phone! With that out of the way, download the boot.img and the Magisk.apk (for others trying this on a different ROM, please use the corresponding boot.img for that ROM!) from those two links to your PC… …and enable ADB debugging on your FP4 if you haven’t already. Install the Magisk app by either running a…

Also I do not know after having used magisk and messed around the system wether Android Verified Boot is implemented or not. Should someone know how to test it or enlighten me why it might or might not have been broken I might be interested.

SeedVault efficiently restored my app and files after relocking.

Fairphone 4 seems to be missing from the DivestOS device list now.

Did something change or am I blind?

@AvidAlbatross
A new update is in the progress of uploading on my very slow Internet connection.

Ah, makes sense. Just wondered if there was an issue or something meaning FP4 isn’t supported anymore

There is no issue it is all good after two OTA updates. The only app having issues are those that were selling my private data and I soon found workarounds for enough of them for my Fairphone to be fully usable. Use FOSS counterpart; use app in browser; use original app that seem to require google play services even though it works without anyway; all good for privacy and freedom with DivestOS

Did you lock the bootloader after installing?

Edit: it seems you did! I don’t think I’m gonna risk it though

Hello
Yes my bootloader is locked.
After 6 weeks and three OTA updates it works well. There is a focus on privacy and security. Apparently FP firmware is now included. Only messanging application Signal drains so much battery without google services that it is arguably unusable. I have nothing else to declare apart from an efficient and available support on XMPP

Experimental A13 based builds are now available for FP4: News - DivestOS Mobile

Reported working so far, albeit with some hiccups of two random reboots noted.
I don’t have a Fairphone myself to personally test with.

Calyx has released their device flasher now. I’m just wondering if there’s any way of making the device flasher flash Divest OS instead? Has anyone tried it?

Can it lock the bootloader safely if you use Divest OS?

Hello
I have updated my DivestOS FP4 to A13 last week and it works as before without any random reboot so far.