I wanted this morning to put a Countdown in the FP Clock of 14 hours (I have to call a friend when he’ll land in Los Angeles).
When trying to input 14h (14h00mn00mn), it is blocked to 09mn59mn59s top. Not possible to go up to this time.
I don’t know if Clock is an app from Android or Fairphone (I’m a former iOS user), it’s not really a big issue but it is annoying for a standard App like Clock.
I tried to find a solution with different keywords on Google but I don’t find anything relevant, maybe because I’m new to Android and English is not my Language (I’m French).
A clue ?
Thank you 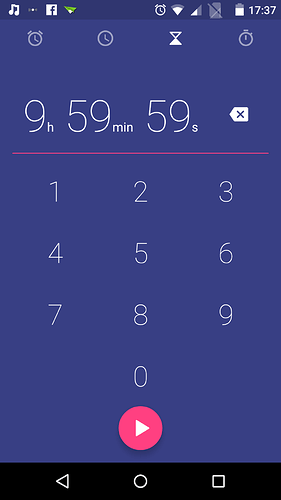 I can confirm the max countdown time is 10h 40min and 39s (If you type in 9 99 99).
I guess the simplest workaround is set an alarm instead, second one would be download a different clock app.

Thank you for the information.

I can confirm it is a limitation from the Android app after testing it on a Moto G. My former Nexus 4 with CyanogenMod has a higher limit, though.

Thank you two for all these datas and Apps name.
Apparently it’s only 23h59 on iOS 7.
I guess the post can be closed.