Charging only works with the cable in one way

I have a problem with my almost 1 year old FF3. I can attach the USB-C cable off-course both ways, but charging now only works when the cable is attached one way. When I connect the USB cable “upside down, 180 degrees”, it is not recognized and does not charge.

There is no problem with the cable, I tried 3 cables. And the cables do still work both ways on other smartphones.

So it seems the USB-C port is partly broken.
Is that a known problem?

It’s not that easy to tell.

You say you have tried three cables and they all work on other devices both ways indicating that they are wired correctly.

Only in the case where both are faulty on one side would you have to be careful which way you insert the plug.

If however it is not the orientation you may find it swaps sides indicating possible debris in the USB C port on the phone.

So although others may have the same issue, it is not a ‘know’ problem and can be caused by different things

Thanks for the detailed answer, amoun.

Indeed, all the cables I use to charge my FF3 are now labeled so I know how to connect them.

I understand that all contacts in USB-C are on both sides, so that the cables should have to work both sides. That’s one of the great things of USB-C.

A few weeks ago I bought a new cable to use in my car. And the same problem occurs: the cable is only recognized one way.

It’s not a first world problem, I know how to connect the cables to my FF3 because of the labels/logo’s on them. But if someone has an idea / solution / the same problem, I’m curious!

I have one cable that charges my FP3 in general 2 sided however when using with my power bank only one sided…so it also can be the charger causing this? In general since USB -C and quick charge etc. Its no longer so easy to just use cables you already own and to me it seems like rocket sience.

Same problem here also with a FF3 after 1 yr approx.

Hi.
With no detail of what you use it’s difficult to know how to reply.

You cannot test the cable in another phone as if that phone’s USB C is wired fully then even if the cable is a bit duff no matter which way you use it it should be fine.

So the scenario you mention can only occur when both the USB cable and the USB port on the phone are duff.

However you will want to convince yourself it is not just debris in the port before you replace it, hence marking at leats one cable on both ends to ensure you always insert it the same way to confirm it doesn’t change. If it does it may well be debris / contaminate that has coated or corroded some contacts in the phone’s USB port.

Water or dampness can be a problem. Fine dust can leave residue hard to see and then collects damp and leaves oily coating or as time passes the gold on the contacts wear and the copper substrate corrodes. It’s not easy to see without a good magnifying glass etc. See

I’ve had issues with charging in last month too. It got resolved by cleaning USB-C port on phone with old used toothbrush, although it also looked clean before doing it. Toothbrush must be dry while cleaning.

This isn’t strictly true. USB-C ports use all 24 pins separately (except GND). This matters less for USB 2.0 since it doesn’t use any of the high-speed channels, but still the two configuration channel wires (one on each side of the plug) are used and not wired together. For power delivery reasons, one of these wires does something else (V_conn) so the port must detect the orientation to work properly. So if only one configuration wire is used by the charger, and the port has that wire broken, things won’t work in one orientation.
[USB-C - Wikipedia]

It depends on the charger

I suspect that’s the difference here: whether the charger uses both configuration channels and can switch them up instead of the phone’s port doing it.

Edit to add: that’s just an example. It’s also possible for another disconnected/broken pin to cause connection issues, though usually that requires more than one bad pin before it becomes an issue with USB 2.0

This isn’t strictly true. USB-C ports use all 24 pins separately (except GND).

Yes ‘cross wired’ isn’t a good shorthand, what I could say is that the connections on both sides are identical and run in the opposite directions when looked at from the end, so that no matter which way it inserted the connections are the same, ‘diagonally symmetrical’ would a have been a better simplification.

Also not knowing the type of cable does impact the finer detail.

As mention above if the USB A only has one channel (A5) to communicate then in a good case if the USB C port is ‘diagonally symmetrically wired’ then no problem with orientation. 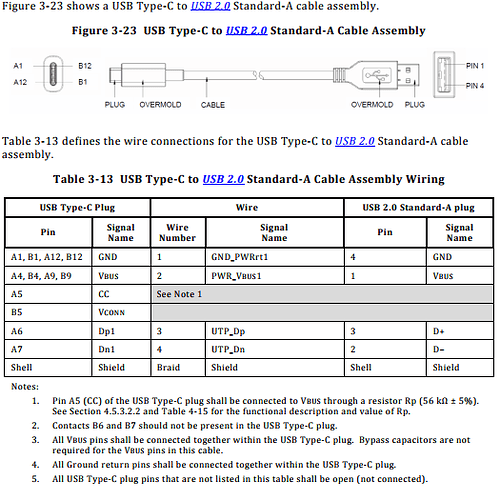 That’s a good diagram, thanks. Do you have one for USB 3.0 by any chance? That looks to only be applicable to USB 2.0 cables. It’s probably safe to assume that it’s a USB 3.0 cable (either USB-C to C or USB-A to C), since USB 3.0 has been around for ages and the cables are pretty cheap.

For a USB 3.0 cable (or just for USB-PD), CC and V_conn (aka CC1 and CC2) can’t be wired as simply as that since they need to be used for negotiating power delivery.

Though that does raise a good point about a USB 2.0 cable maybe working when a USB 3.0 cable wouldn’t.

I am experiencing exactly the same problem, on BOTH my phone and my husband’s, a few days after upgrading to android 11…
This can’t be a coincidence…

@NGnius I think I got that diagram came from https://pinoutguide.com but can’t find it or ???

This sound the same as I experienced. It starts with this behaviour and the “quick” or “slow” charging.
A year ago this happend to my fp3 and after some testing the support replaced my bottom module.
It worked nice. But slowly I see slow charging or not charging at all come back more often.
I am.thinking towards something like connectors not working as good as they should in combination with the charging speed software.
I was thinking of bying a heavier charger to test this.

I think the USB Port wears out over time, to prevent this I use a magnetic cable, i.e. the plug sticks in the port. There are cheap cable available on amazon and soon syllucid will have its online shop go live for orders

I was thinking of bying a heavier charger to test this.

A more powerful charger is rated by Watts. A 100W charger will provie the same voltage as an 18W charger.

The battery will only accept 4.2V approx from any source and the current it draws cannot increase by using a charger that can produce a higher output.

The higher wattage charger is just the max it can produce constantly without overheating and breaking down.

The charge rate of the battery is around 4,2V at maybe 3A max. That’s a bit less than 15W so with good connections and negotiations in a battery could charge in 1½ hours, which though can stress the battery.

If the charger, cable USB C and USB port on the phone are only working on one of the diagonally symmetrical wiring then there’s only a 1 in 8 chance that you will connect it to charge at all. Uisng a USB A on the charger side gives a 1 in 4 chance

So ensure the port is clean, really clean, use a magnifying glass. Label both ends of the cable if it is USB C both ends.

Finnaly if no luck and you are out of warranty buy a new bottom module, else contact support again.

I think the update to Android 11 will be the problem.
I even changed the bottom module, i still have the same loadingproblem.
Before the update, alle worked clearly …

Very unlikely an OS update but no doubt coincidental.

Why change the bottom module if it charges one way.

It’s difficult to rule out the OS and even a factory reset only takes you back to a clean OS i.e. as you installed it.

If it is an OS you may have to manually install a download to overeride a faulty update.