Hi!
I think the FP4 is great! But I can’t use it without spamming screenshots since the screenshot button is where the “close all applications” button was on earlier android versions.
I actually think this is incredibly impractical … I can’t imagine anyone needing that many screenshots.
Can i somehow remove this button ? Or change it so it closes all applications again ?
I have not found anything on this yet.

This is a new feature in Android 11. I am not sure it can be changed.

I don’t care at all, however on my FP2 with LOS I have the Screenshot “Button” at the bottom and the close all apps “button” at the left of all apps. Overall most likely a case of “have to get used to it” 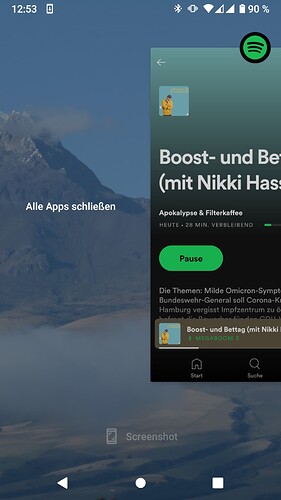 You have to swipe to the right to see it.

where the “close all applications” button was on earlier android versions

Just checked with Android 10 on the FP3 and there was no button at all where the “Screenshot” button on Android 11 is.
The “Close all apps” button on A10 is in the exact same spot as on A11.

Oh OK I didn’t know that.
Then it’s just a general feature request to change that button functionality

Just checked with Android 10 on the FP3 and there was no button at all where the “Screenshot” button on Android 11 is.

Curiously, on the FP2 the screenshot button is there.

To come back to topic, on Android 11 it is possible for apps that add items to the power menu, so it could be that there is already an app in the Play Store for any function that you would like there.

Curiously, on the FP2 the screenshot button is there.

Which version? In the Android 10 beta it’s not there either.

If you mean the power menu, then yes I have a screenshot button there - FP OS Android 10.

EDIT: I see Android 11 added one in the app switcher. No, I don’t have that button. I was under the impression that you were talking about the power menu, hence the confusion.

I believe a “close apps” button used to be there in previous Android versions; probably 5 or 6.

Another edit: Even Android 5 doesn’t appear to have it, I must have seen this on some Android 4.x version - so very long ago, when the app switcher still looked very differently. 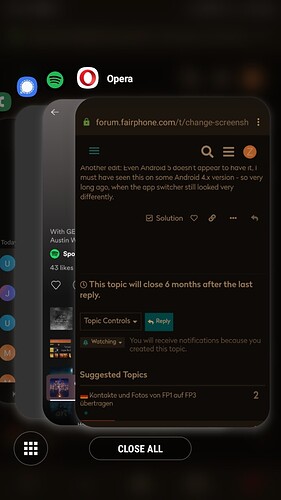 Which one? Which launcher?
On the FP2 with FOS it looks different, no buttons.

I am so sorry, I forgot I am not running stock android xD.
I am running black diamond OS and only after reading your posts I started googling stock 9 android and noticed its not mine at all.
I’ve been running this for so long I forgot it ain’t stock.

So actually I have no idea how stock android does it.
Black diamond can sort and do folders in the app screen (swiping up from home screen) which is what I was additionally missing.
And the screenshot shows the program chooser or whatever its called (what happens if you press the button that’s not the back button).

This is AOSP, and i think they do not accept your CR