Cell Broadcast - how to turn off 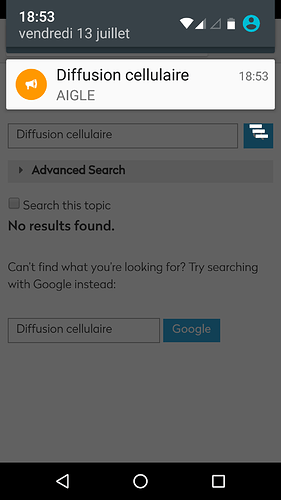 Guys, I moved to Switzerland recently and I bought a SIM card from a local operator. The thing is, every time I move from one city to another there is a message alert called Diffusion Cellulaire (which I think is Cell Broadcast in english, see attached image) that keeps ringing many times, quite annoying! Problem is that the system appears not to allow to shut it off, or at least silence it. Does anybody knows a way to deactivate it??

Diffusion Cellulaire (which I think is Cellular Difusion in english, see attached image)

Google suggests it translates to Cell Broadcast . This is a generic mobile feature, but its usage varies from country to country.

Just search for “broadcast” or the equivalent in your language in the settings, there you can turn on and off several of these broadcasts.

Sounds like you’re receiving cell broadcasts that announce the region that you’re in, every time you change from one region code to another. There should be settings somewhere in messaging > [menu] > settings > [SIM] > Wireless Alerts > [menu] > settings (Could be different - only have an FP1 here, so going by generic Android 7 notes) . Channel 50 is usually the culprit.