Cannot control the call volume with a wired headset

changing the call volume (from the phone, not from some control on the headset) during a call has no effect (the volume stays the same, at a quite high level) when using the wired headset provided with my Fairphone 4.

Welcome to the Community Forum.

A wired headset is not included with the FP4 in most countries, I guess you are in France? (French law used to demand mobile phone manufacturers to include a wired headset with their phones if sold in France. From what I remember this law dating back to the early 2000s has only recently been changed.)

Anyway, you might want to add if your FP4 is running the stock OS (Fairphone OS) or a custom ROM like /e/OS. I’m asking because I have got the same issue for a while on my FP3+ running /e/OS – caller always at maximum volume when using a headset (problem both with wired and wireless ones).

Hi, I do live in France, and I updated my question with my OS information. Thank you.

It would also be useful if you could elaborate on which sort of headset you’re actually using. I have never seen what Fairphone might have shipped in France. Is this a USB-C headset or something with a USB-to-headphone jack adapter? Does the headset have its own remote control or do you change the volume with the phone buttons? Do you have a chance to try other wired headsets and see how they behave?

I think i have one of those “french headsets” its wired USB-C. Can confirm I can skip title, stop and play, however its seems they arent able to control Volume. As those are quite basic, I’m wondering if they should/could be able to control volume or not?

Overall in general not all headsets work with all phones the same way, so as those are no FP Product and added only due to local law, I would not expect much here.

It is a USB-C headset, with no volume control (see attached picture). 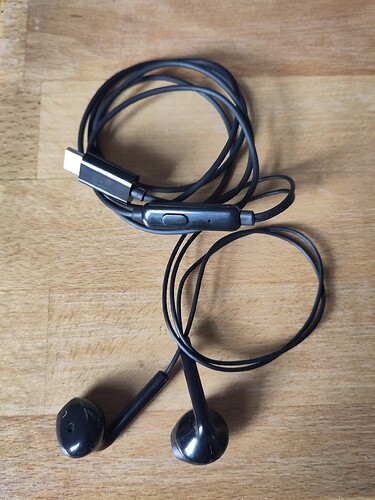 So you say when you use the vol buttons of the FP4 while the headset is connected, vol control on the FP4 does not work. Only for calls or overall? Just tested the headset while listening to music and dont have issue. Cant test with call.

Only for calls. Thanks.

So it works for music or you didnt test? At the end maybe ask support if they know if it should work and if they can do anything about it.

I did test with music and it works. My issue is only related to calls.

I´ve actually noticed the same issue with FP3+. I am in Finland and use Koss Porta Pro headset, which isn´tconnected via USB-C but the normal headset connection, for music listening. If a phone call comes while the headset is on, the call and the sound of the caller is very loud, and you can´t change it. Pushing volume buttons in the phone has no effect.

For changing the volume of the music it works just as expected.

It is possible that this is a problem with the Google dialer app (Phone by Google). Can you try with a different one? For example Simple Dialer.

I’m asking because I have got the same issue for a while on my FP3+ running /e/OS – caller always at maximum volume when using a headset (problem both with wired and wireless ones).

I guess it won’t help the others because AFAIK there hasn’t been a Fairphone OS for FP4 update since this topic was started, but apparently my problem has been fixed after the most recent /e/OS 1.7 update. Had a phone conversation using my Fairphone modular headset yesterday and I was able to control the volume.