Can you feel it coming OTA tonight? - THIS UPDATE IS NOT OFFICIAL!

Ehrm. My FP2 just updated to Fairphone OS 17.04.3, not 1.13.0 or something. Plus the OS does now behave strange (swipe left side to a phone/sms shortscut is missing).

I am confused. Everything normal or what just happened?

The release of this update via the updated updater app was a mistake!

The OS was not officially approved by Google yet. That doesn’t mean it’s not safe to update, but if you like to follow rules better wait. I’m sure @Douwe will elaborate soon. PS: Official update won’t come for at least another week!

#Info about the update:

This is a #wiki

Seems you enabled the beta mode in your updater

I didnt. However, I got an update for the updater. After updating the updater (… inception… ), it got the notification for the new version.

EDIT
Is it possible that the updater got set to beta when updating by technical mistake? I am relatively certain that I did never change the update settings. (Where do I even do this?)

Is it possible that the updater got set to beta when updating by technical mistake?

I rather believe you are the first lucky one who updated to Android 6 regularly.
In the Staff Sub-Forum an exact update date was not shared either, so it took me a little by surprise, but now I’m quite sure that’s what’s going on.
@anon12454812 is probably writing the announcement as we speak.

I may be wrong, but I’m definitely excited!

I also got an update for the Updater and now it shows that Fairphone OS 17.04.03 is available

guess the accouncement is coming every minute now

In this case: Yay, happy Easter with Android 6. Seems a little faster to me so far, lets see how long the battery lasts now.

I can confirm that. Just checked for a FP OS update but got none (still 1.13.0). Then did an Updater update in Google Play (though it wasn’t in the available updates list) and now get the update presented: 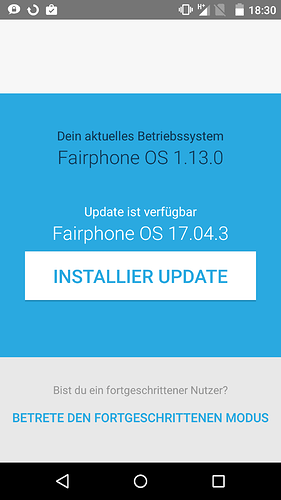 Probably they’re switching the version schema to be consistent with FP Open OS. That might help to reduce confusion about which versions correspond to each other.

Or the change might be a result of a unified code base of FP O S and FP Open OS.

Probably they’re switching the version schema to be consistent with FP Open OS. That might help to reduce confusion about which versions correspond to each other.

Or the change might be a result of a unified code base of FP O S and FP Open OS.

I think it’s the first guess. AFAIK the code base was always unified.

EDIT: Or maybe Android 6 was released today, but the announcement is not written yet…

I could also imagine that a big announcement might have triggered a sudden updating rush. Maybe it is actually smarter to let the news trickle through gradually.

I was really happy to see that I can install “Fairphone OS 17.04.3” over the Updater App. But directly after the reboot, a message appears, that it was not succesful.

Could the reaons be that I encrypt my Android? But then how do I re-instal the new version? Do I have to go back to factory default? I hope not…

I got the OTA for 17.04.3 just now and I am trying to update now but it’s doing the “Starting Android… Optimizing app X of Y…” for the 5th time now. Seems to be in a loop. Is it save to pop the battery and hope it boots normally after cooling down a bit?

Yes. And if it doesn’t help please continue here:

I'm assuming this is the Marshmallow update. I used the self updater and the phone burned through 70% of battery within an hour while booting and optimizing/recompiling the apps again and again. I'll try later to apply a fresh flash so be warned this might not work as intended! important: BEFORE RUNNING THE OTA YOU MUST BACK UP! there is a major chance you will have to factory wipe your phone!

Pff, thanks. It started to become very hot. I am letting it rest for a while, charge the battery and try again later.

And the time to asking: “How old is my last backup???”

With a fresh backup the upgrade process is much more relaxed.

Fairphone must have released it accidentally earlier as the updater app hasn’t been updated recently. The update mentioned is from 31st march.

The same for me. Updated the updater, then started the download and let it reboot. Then it stops in the system recovery telling me that the footer is wrong, signature verification failed and installation aborted. Luckily I can reboot and return to Android 5.1. I have even tried it a second time with exactly the same result. Any idea what is wrong there?