I have just converted across to Lineage OS 16 (Pie) on the basis of having to reinstall the phone anyway, and I wanted to ditch most of G**#le. I have kept things like the Play Store and Maps because I do actually need to use my phone!!

The default dialler that comes with LineageOS seems fine except that at the end of every call, it would appear that it has tried to record the call. It has stored a copy of the audio into IdeaCallRecordings.

Two things about this - I don’t want it to, and I don’t like the advertising that comes up. I have installed IdeaCallRecorder which I then turned off CallRecording and it stopped. However, I don’t want the app, so uninstalled and the dialler is back to recording the call. As I hang up I am offered to save or share (though it is already saved) make a note, see some advertising and purchase the pro version.

Is there anyway that I am missing to turn this off? Or do I need to replace the dialler? 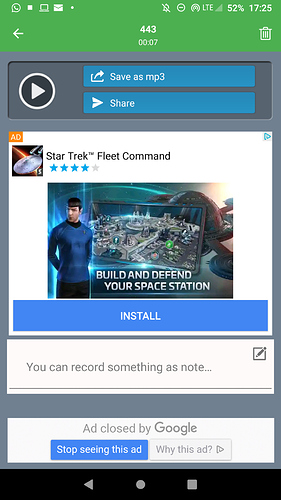 Well, by doing a screenshot to upload I have solved it. Sorry to have bothered everyone, but I will leave it here for information.

I have used Super Backup (Apparently by Mobile Idea Studio) for a while despite its intrusive ads, because it worked best on various devices and I can edit the files before restore.

It would appear that this is the app causing the problem. Bye bye Super Backup. (Yes it can be turned off, but it is intrusive, and tries to trick you into encrypting photos etc, so it is the final straw!)

Not Lineage or the dialler at all - which is why I couldn’t find any information about it.

Hi, one more Question:
Is Call Recording working well with Lineage PIE, because I heard of limitations in Google Pie, and that I will be killed in Android 10

Certainly this app didn’t work well. It was okay on Loudspeaker, but actively said that it doesn’t work on the FP2.

I have also read (in trying to work out how to stop this) that it isn’t possible on Pie and Google are cracking down on it, by disabling the possibility.

I think from their point of view, that rogue apps could use this data in a much more abusive way than some other data they can steal.

I think most devices don’t allow the ability at the hardware level, and Google is finishing off those that do. Of course the pros and cons of recording have been discussed to the nth degree, so I’m not going to start that again here!

Thanks NEast for the reply,
well maybe some one else can share some experience with call recording apps on LOS 16
I didn’t change to LOS 16, so I can’t test it myself.

I actually want to record the calls but I cannot find an app able to that on lineage 16. Is there a way to do it or it’s just impossible?

I don’t use voice recording, and have never found it very successful when I have wanted to use it.

I’m not sure FP2 really supports it at a hardware level from what I’ve seen. If you really wanted to try, then the app I mentioned above does try - but it’s far from perfect. It is also quite loaded with ads, and often asks to encrypt photos, so be careful if you just click things to dismiss them!

On lollipop I was using call recording and was working smoothly. Now that I upgraded on lineage call recording doesn’t record the voice of the other people but only mine. Therefore is not an hardware issue but only software related… Thank you for the suggestion but I’d prefer a more user-friendly app… The advertise you did is not very promising ahahahah

I stayed on LOS 15.1 (Oreo), and can still record calls, the other side is quiet, but still audible
It is a pity if this doesn’t work with LOS 16 anymore

Yesterday I updated the Rom and it’s now working with an app from the play store. So I guess was a problem with that version of the rom

Cool! thanks for your answer!

Interesting. I guess (not that I thought of it this way) but I was sort of meaning the kernel / rom must be “hardware” issue - as opposed to a problem with an App.

Logically, the hardware must be able to record the calls, since the microphone and speaker are both connected to the same chip. So it must be whether the apps are allowed appropriate access to the hardware to make the recording - which brings in the kernel & rom.

Glad you got it working. Which app and rom version did you use?

I’m using Call Recorder on lineage 16 28-11-2019. Only problem with Call recorder is that doesn’t save the name/number of who called. In the app is written that is a privacy issue related with Android Pie so I’m not sure whether another app would solve this problem. I tried to activate the native recorder of lineage but I failed. If anyone knows how to do it please let me know

Call recording is getting harder and harder, another barrier is that call recording apps are no longer allowed to see the callerid, i.e. all calls are recorded as unkown caller.

The c’t computer journal from Germany tested some apps, “Cube ACR” uses some tricks to still get the CallerID, and both sides of the conversation have equal loudness

I tested it on LOS16 with the free version of Cube Acr, and confirm it. (No I don’t get paid for this post!

Thanks a lot for the tip