Hey there, here is the story of my battery.
First of all I know the battery is little and I can not expect to much of it, but I bought 4 months ago a new one, just when it was back on stock because I thought that I simply killed the old one.
The old one I had with me overseas and a shitty USB wall plug, used even different ones so different voltage and everything, then just before my return I got a loose USB connection so I had to replug and press here and there a lot, I know it’s bad for a battery, so I decided it’s my fault why it lately was working bad and I got a new bottom module and a new battery.
But here I am with a new battery and 4 months later.
Today I charged my phone to full 100%.
After that I switched straight on the battery saver and had the volume switched off and the brightness on lowest. I used it for just over an hour active, pictures will fallow and you can see it in screen use. I had during the whole time only 2 applications running. Firefox and telegram(a message program like WhatsApp) and wifi was running the whole time.
Just 8 hours later the phone switched off and not suddenly, I could see whenever I checked the time or a message that battery percent where constantly going down. Also when it was on 15% I was using it and it didn’t last over 5 mins before shutdown.
With just one hour of little internet usage in my eyes that is too little, like that I am not able to get of the plug?! There must be something terrible wrong. What other things can cause it?
I already took all parts apart to clean and set it back together.
Another thing which can’t be the problem is my charging device. I bought from zendure the X6 power bank and USB Hub with 45W, and the 63W USB-C PD Wall Charger,
I got them fairly cheap at a Kickstarter product. Both devices feature a zen 2.0 USB port.
That means according to them:

What is Zen+ Adaptive Charging?

We have made great efforts to upgrade ZEN+ into Zen+ 2.0, which greater compatibility. Zen+ 2.0 is compatible with tablets and phones from Apple, Samsung & other brands. Zen+ 2.0 provides ultra fast (up to 18W) charging of Qualcomm Quick Charge 3.0 compatible phones, including Samsung Galaxy S7. Output: 5V/3A - 9V/2A - 12V/1.5A.
Zen+ automatically identifies any connected device and determines your device’s needs, and then fine-tunes the output to charge it at optimum speed. It not only enables the safe usage of maximal charging power but also makes charging much faster compared to traditional power sockets.

I charged my Fairphone only with those 2 devices and actually thing that they shouldn’t be part of the problem!
One thing I didn’t do yet is the upgrade to the new Android as I still want to wait for the first update. I know it’s supposed to improve battery life, but my phone was lasting a longer battery time with this Android before as well and I’m Keen to get it back and fix the problem.
Here are the pictures and I’m quiet curious why in the battery usage also the apps I used are not appearing anymore?! I’m sure they did before, but it shows only what the picture says, also the count is not 100% if you calculate together and the mah also is not nearly the one of the battery. So please help me finding the issue of that problem.
One reason I can thing of is the USB connection of the phone, so saying the bottom module?! But that will be my 4th broken one then(in 3 my microphone broke) 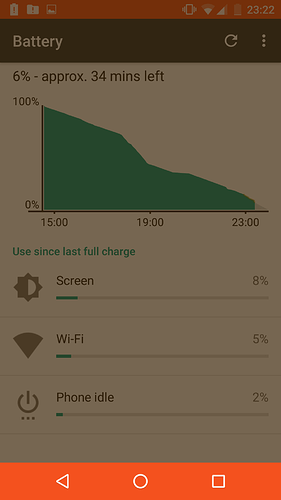 No more listed.
Makes a count of 365 mAh.
Thanks for any help or advice!

Can this be because of a broken bottom module?
I just figured my microphone doesn’t work anymore, as I didn’t make a phone call in 2 weeks I didn’t realize any earlier.
To be honest it is my 4th broken microphone in 1.5 years of having this phone…wtf?!
But can this be the reason of the problem?