Apple pledges to use 100% recycled materials

Just ahead of Earth Day, Apple has released its 2017 Environmental Responsibility Report with a lofty new goal: ending mining. Apple says the company is working on a “closed-loop supply chain” that would allow it to stop mining the earth for rare minerals and metals.

Looks like good news, although I’ve heard recycling processes are often very energy demanding, so a more durable product would be preferable, but that’s not really in the best interest of Apple I guess.

Just ahead of Earth Day, Apple has released its 2017 Environmental Responsibility Report [PDF] with a lofty new goal: ending mining. Apple says the...

Greenpeace seems to be positive:

“This commitment, and Apple’s recent progress in transitioning its supply chain in Asia to renewable energy, puts it far ahead of others in the sector. Major IT brands such as Samsung, Huawei, and Microsoft should quickly match Apple’s leadership, if they don’t want risk falling even further behind.

This morning I read they were forcing their recycling companies to shred all the iPhones and MacBooks they receive instead of repair/reuse/resale.

I didn’t read the whole article so I might just have understood something wrong. No warranty

@huskers - I think it is even worse. Pretty much read the entire article just now and it doesn’t leave much space for misinterpretation.
The recycling happens at third parties and they are forced by Apple to shred everything they receive, not only Apple products

Quote from the article:

So Apple isn’t just preventing Apple products from being salvaged, it’s ensuring that everything else is getting shredded, too.

And they call that “recycling”…

Thank you for the link @huskers

Don’t get me wrong, I’m not totally pessimistic about things changing for the better. Once Fairphone gets bigger and other companies change some of their practices too, Greenpeace and co won’t have to say “look this company is doing something good, everybody else please do that too”, when they didn’t evaluate whether it’s really a step in the right direction, but they’ll be able to compare the measures different companies take to really compete in a fairer market.

It’s probably cheaper for them to shred old Apple products than to mine for new minerals.

Apple actually does mine for minerals. They simply went for route 3, as described in Fairphone’s blog post: 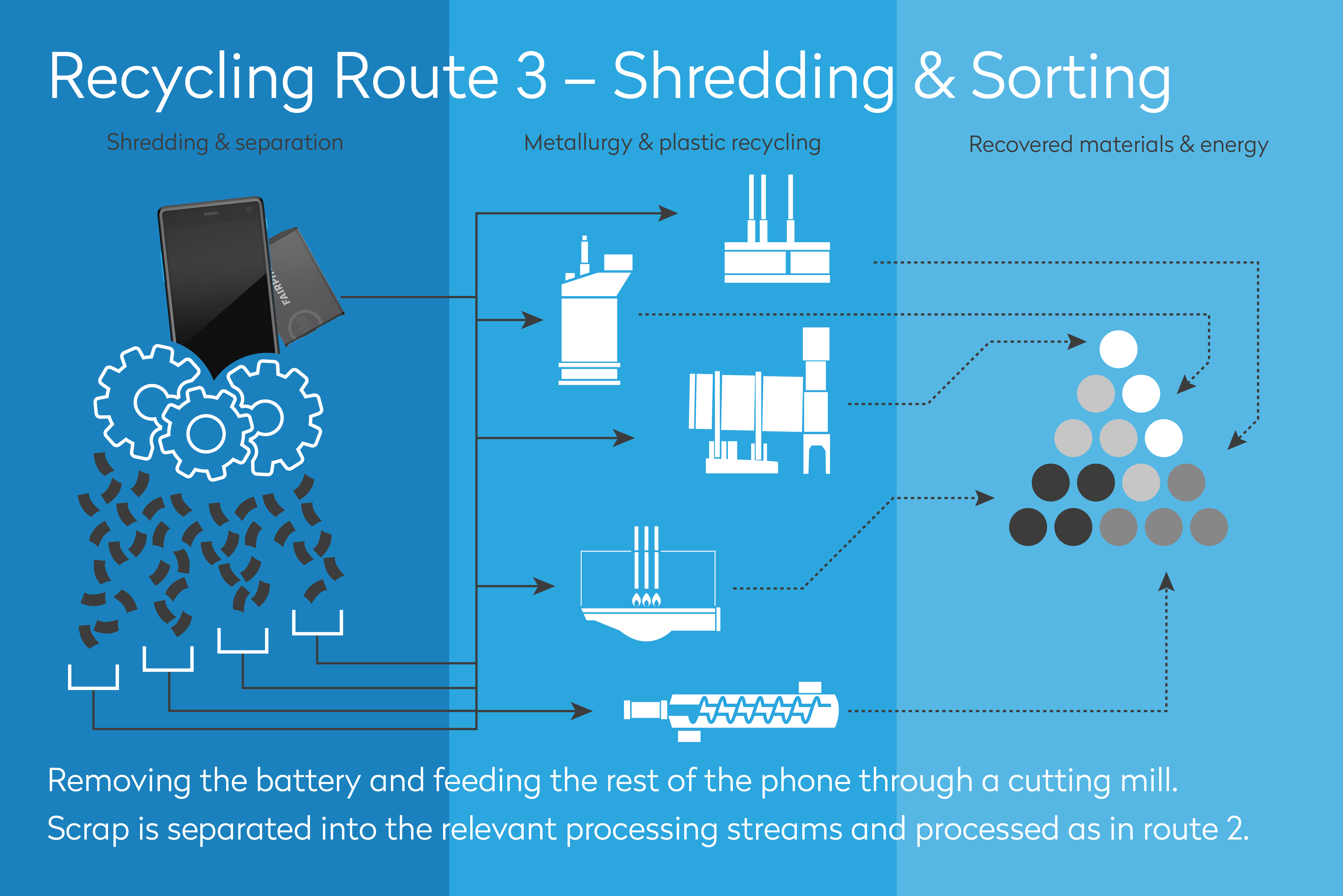 Fairphone finds that route 2 (dismantling and using different recycling process for different parts of FP2) is the best way (at least for FP2). We do know that the iPhone is not easily dismantled, so that could be one barrier for Apple. In my opinion, however, they simply don’t want the working parts of their phones refurbished and sold as spare parts. That would decrease sales of newer iPhone-versions.

In my opinion, however, they simply don’t want the working parts of their phones refurbished and sold as spare parts. That would decrease sales of newer iPhone-versions.

Yeah I think that’s the most plausible explanation here. I also think Apple might be afraid that if resellers are selling refurbished hardware and the hardware fails, Apple is blamed for the low quality of the product by the new owner. Apple wants people to think of their devices as premium quality. Having failing refurbished hardware in the wild might taint that image, especially when resellers aren’t entirely clear about whether or not the devices they sell are refurbished or not.
I even think most people don’t know what it means when they buy refurbished hardware. They’re not familiar with the term, and this (English) term is used even here in the Netherlands where it’s probably even less well known than in native english speaking countries. These guys (site via google translate), for example, are making primetime commercials on TV and on billboards. I’m not sure if people really understand what it is this company does.

Apple actually does mine for minerals. They simply went for route 3, as described in Fairphone’s blog post:
(picture)
Fairphone finds that route 2 (dismantling and using different recycling process for different parts of FP2) is the best way (at least for FP2). We do know that the iPhone is not easily dismantled, so that could be one barrier for Apple

Since this route is the common standard in most (European) recycling, I’m not really surprised or disappointed in Apple. They just fit into the system, nothing more or less. Although, maybe I’m not disappointed because my expectations regarding Apple are already low to begin with

If you would bring your FP to a recycling center, it will get the same treatment as any other device, like any Apple product. Why? Because it’s much, much cheaper to shred products than to dismantle them by hand. Especially in Western Europe, where labour costs are relatively high. Also, any worker at the recycling facility would have to know how to dismantle every single electronic product. That’s just not realistic.

At EU level, work is in progress to lay down basic “recyclability standards”. Probably, these will describe to designers which techniques are to be encouraged and which should be avoided. Alas, the work has just started: we don’t expect any final texts before 2020…

However, as you can see on the website @Jerry found, a second hand market already exists outside the recycling circuit. It’s often rather small-scale, but it is certainly growing. Many problems could still show up (not in the least questions about warranty and brand image, or whether or not this is a “new” product that has to fulfill all product legislation), but I don’t see any way Apple (or any other brand) can prevent this from happening. Here too, work on EU-level targets is “in progress” to push for more re-use of products.

By the way: searching for “iPhone” on ebay gives me 90.000 results. Not bad for a company that has forbidden the second-hand reselling of it’s products, no?