Hi,
I’m running Fairphone Open 22.0.0-rel0.
I just installed Fairphone open from scratched. All apps are working. Except for one. This app keeps asking me to turn Bluetooth on while it is already on and will not connect to the device of that app. I rarely use Bluetooth myself, I don’t think I have other apps that need it. I can send and receive files over Bluetooth to my PC. I installed the app ‘Greentooth’ from Fdroid. It turns off Bluetooth if idle. Yet it doesn’t turn Bluetooth off. So maybe the problem does is Fairphone open related?
Any ideas what the problem might be or how to test (test app?)?
Thanks!

I rarely use Bluetooth myself

In that case I would advise against using Greentooth, you don’t really need it. Just keep Bluetooth off except when you do require it (you can do this very easily with the quick settings tile).

Are you sure you have understood the purpose of Greentooth? The description says it will turn Bt off when no app is using it (there is a timeout setting you can adjust). It doesn’t say anything about enabling Bt again if an app needs it.
Note also that the developer announces having no intention of fixing possible bugs in the near future.
Be aware that the Bt tile may signal Bt “on” when in fact it has been turned off by Gt. I haven’t looked at the app or the code but that’s the sort of bug it would be easy to create.

As Yvonne says, please say which app is having a problem, and the device it connects to, if you need further advice.

Hi, thank you all for the (very) quick replies.
The app I want to work is Upright (https://www.uprightpose.com/, https://play.google.com/store/apps/details?id=com.uprightpose.upright_go2&hl=en&gl=US).
I only installed Greentooth after I had troubles with Upright. Just as a way of testing Bluetooth. So the problem existed before installing Greentooth, I had tried everything before I installed Greentooth (turning Bluetooth ON/OFF, restarting Upright app, restarting phone, reinstalling Upright app …). So I started testing Bluetooth itself to see if there were any issues on the Fairphone Open side: send and receive files, install Greentooth). I also uninstalled Greentooth: Upright problem persists.
@OldRoutard : I don’t need and want Greentooth. It was a way of testing if other apps would have difficulties. Turning Bluetooth off is a test. And I find it odd that it doesn’t turn off Bluetooth. If Greentooth turns Bt off, but not the signal, how do I find out if Bluetooth is really on or off? Indeed Greentooth might not be the best choice.
Are there other ways of testing Bluetooth to make sure it is not the a problem on the Fairphone Open side but on the Upright side?

Difficult I guess…so Upright is dependent on GSF which is missing using FPOOS (Edit: or did you insgall GApps?), what could be a reason. upright needs location enabled, I assume you have it turned on before pairing the device? Can you connect the device with the FP without using the App?

If Greentooth turns Bt off, but not the signal, how do I find out if Bluetooth is really on or off?

Not sure I understand correctly but in the settings e.g. you should see if on or off. So when off, you think its actually still on? 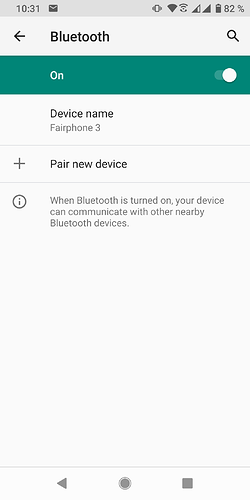 I just tested Greentooth on my FP2 running FPOS Android 9 and I think it works as expected, 20sec after I disconnected my BT Box BT was turned off (tile off). So have you tested Grenntooth when the Upright app is not installed but the device paired and disconnected?

Edit: what OS was installed before and did you ever use Upright before installing FPOOS?

Hi,
@yvmuell
I contacted Upright support. They are aware that my phone doesn’t have GSF, but did not make a problem out of it. I did not install GApps.
Permission for location is enabled. This could also be the reason why Greentooth doesn’t work (outdated)?
I just tried to connect the device via Bluetooth list. I could connect it.
“So when off, you think its actually still on?” It was a a reply to OldRoutard. He thought maybe the tile (quick settings icon) was displaying wrong information, because of Greentooth.
Ok I found the FPOOS Bluetooth screen with ability to turn off or on. (Yet only through search in settings, I see no way to access that screen directly in Android 10.)
@yvmuell
Maybe it is an Android 10 issue?
No I have not uninstalled Upright to test Greentooth on its own, as I don’t need Greentooth.
Yes Upright was working ok on Android 9, Fairphone OS – with the Google Mobile Services.

I personally would think its a GSF issue (not sure how much an App support know about such things). Overall BT seems to work on your device.

What you can do, as its difficult for us to reproduce, add an issue to the bug tracker hoping the FP developer can exclude FPOOS as a root cause Monitoring the state of the Android 10 release on FP2

To access “quick settings”, to turn certain functions on or off, just swipe down from top of screen at any time. Tap tiles to turn the function on or off. Use the pencil to add tiles or remove those you don’t use.

Thanks! Buried quite deep. Live and learn I guess.

I was not talking about quick settings, but the screen posted by yvmuell.

Hmm, not sure if everything already clear with all the hints from the recent postings, but Bluetooth is working only when you give app permissions for Location plus Bluetooth (weired Android specific limit). Did you check both permission settings already?

Yes, I gave location permission to Upright. Thanks.

Hi everybody.
Some many thanks for your suggestions but still struggling with this.
@yvmuell “So have you tested Grenntooth when the Upright app is not installed but the device paired and disconnected?” I just did uninstall ‘Upright’. Greentooth still doesn’t turn Bluetooth of when inactive. Though maybe some other app may be using Bluetooth. How to be sure?

yvmuell checked Greentooth on Android 9 and it worked as expected. I’m on Android 10, so Greentooth not working for me maybe Android 10 related? In any case Greentooth may not be the best choice for troubleshooting Fairphone open side, any other apps which would be a better fit?

Greentooth still doesn’t turn Bluetooth of when inactive. Though maybe some other app may be using Bluetooth. How to be sure?

If I remember correctly Greentooth should turn off when no device paired. To check if any device paired you can look at settings e connected devices. Overall I’m still not sure how reliable the app is as its not maintained and I don’t know for which Android Version it was developed.

I personally would have the impression that your BT is working well and you must try to use unfortunate combinations: Upright needing probably GSF, Greentooth developed for any Android Versions other then Android 10.
The difficult part is to check Upright on other FP2 when you don’t have an Upright device.

@yvmuell
Thanks
I only see some previously connected devices. So I guess no connections.
Upright app complains even without the device, but you might have to make an account.