Experiencing issues in a particular banking app when some kind of in-app browser is called. 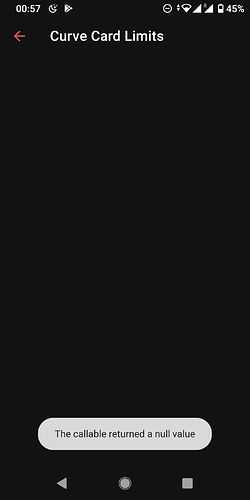 I am certainly not the only one having this issue (btw I don’t know whether it is FP or Android related) but it is so rare that the app developers seem very confused about it.

Well, unless the app is Open Source, I don’t think anyone here can possibly help as we can’t look at the source code to see what this message actually means.

The fact that a toast (that’s the notification type) is shown means that someone did write code to not crash when this happens but instead show the toast. So someone wrote code to deal with this edge case. This person would know best.

What you can do to help the developers is say step by step what you did. I see now you’re at a “Curve Card Limits” screen. How did you get here? What buttons did you press exactly? Listing every step helps people figure out what flow you took through the program, you may press a different button somewhere than the developer does when testing, after all.

To me – but mobile apps are not really my turf – it looks like the app is having an issue; might be it’s trying to access some Android function/API, which in turn could be related to FP3, but that’s a far fetch. Could as well be a simple bug.

As written above, completely impossible to say without knowing the sources. Anyway, I’d not be worried about the phone or Android being faulty.

Maybe it already helps clearing data and cache of the app? Or, not sure if the Play Store allows, but maybe using an older version of the app changes? Or maybe the devs of the app have a debug build, or a log file, or something similar implemented?

Anyways, crossing fingers that this won’t be forever like this