Anything that is not working in the fairphone project

Hello.
I have been the owner of a Fairphone 2 model for 5 years.
I made this purchase with enthusiasm and followed the evolution of the project. I am writing for an open discussion on some issues that are dear to me and which, slowly, are making me fall out of love with the project.
why are the replacement components of the previous models out of production?
for what reasons have there been no more hardware upgrade projects compatible with previous models?
why has it never been possible to purchase the motherboard and processor (and connected antenna) as a single component?
Many of the promises made at the launch of the fairphone 2 (“it will be the last model we will produce, the definitive”, “upgrades will be available”), have not been kept. What happened is making you leave the project?
did you perceive the latest developments as a betrayal of the mission?(I do)
do you have a plausible justification for what happened?
We find ourselves in the paradoxical situation in which a mainstream phone (instead of the large number of copies available and the large-scale production of compatible components) repairs itself more easily than a fairphone 1 (impossible), 2 and soon I fear the 3.

why has it never been possible to purchase the motherboard and processor (and connected antenna) as a single component?

When it comes to phone you might be able to think of SoC upgrade or core module upgrade. That means the “motherboard”, the CPU, the GPU, the RAM and internal storage memory. Basically you would have a new phone. It’s not like a PC where you can upgrade just the CPU, or your storage or your RAM. SoC are manufactured this way: not by Fairphone but by his supplier (Qualcomm since Fairphone2’s era).

Fairphone some years ago produced a report with the carbon footprint and other kind of impact of each Fairphone 2 module. IIRC the core module accounted for more the 80% of the footprint of an entire phone. Also the FP2 core module costed more the half the entire FP2. Also, when it come to the operating system you would have to use a different one for each SoC. For the fairphone’s software team this situation would be harder to manage than having 2 different phone.

Does anyone has the reference to those reports?

Many of the promises made at the launch of the fairphone 2 (“it will be the last model we will produce, the definitive”, “upgrades will be available”), have not been kept.

I do not recall such a promise. Do you have a source/reference? I recall a promise about reparability.

why are the replacement components of the previous models out of production?

The FP2 bottom module? They can’t produce it anymore, and it’s out of stock.

Many of the promises made at the launch of the fairphone 2 (“it will be the last model we will produce, the definitive”, “upgrades will be available”), have not been kept. What happened is making you leave the project?

The FP2 was an experimental product. I would say only the FP3 can be considered as a really finished product, and even then… Would they have kept the same form factor it would probably have been a fail, upgrading the core-module wasn’t really an option, as it nearly means designing a whole new phone, or perhaps even harder, while still keeping all hardware faults. How many times did my FP2 reboot in my pocket cause it was bent a little? How many times did it reboot when I just laid it down a bit brutally on a table? A lot, and I’m not the only one. I don’t think you can sell such a phone for very long, or you’ll probably only reach an enthusiastic audience caring more about the social values than the phone itself.
Trying to keep the same phone and upgrading it as long as possible is a fair and nice goal. But if it had brought Fairphone down to bankruptcy, it would have been a shame, and I’m glad FP understood that.

did you perceive the latest developments as a betrayal of the mission?(I do)

I’m following the Fairphone story only for 2 years now, but no I didn’t feel betrayed. Disappointed when seeing how they handle some of their software updates, when they started running after megapixels for their cameras. But no, I haven’t felt betrayed. Fairphone is still doing the best I know and have found in this area.

do you have a plausible justification for what happened?

Fairphone is scaling up and is gaining market share, which they need to grow, to invest, and increase their Fairness (let’s not forget that from 4 focus materials in the FP2, they went up to 10 in the FP3+ and 14 in the FP4!)

We find ourselves in the paradoxical situation in which a mainstream phone (instead of the large number of copies available and the large-scale production of compatible components) repairs itself more easily than a fairphone 1 (impossible), 2 and soon I fear the 3.

No. I can’t agree with this. A few months ago my camera module stopped working. Okay, that’s perhaps due to the actual modularity of the FP2, but I just put another one in and it worked, it took me 2 minutes. How is that comparable to mainstream phones? And the FP3 and FP4 are the same and probably even more repairable.
Can’t speak for the FP1 though.

I don’t have the time right now but in principle, most of the answers to the questions in the first post are in the official Fairphone blog. Not sure when I find the time but I can try to dig them up.

That basically leaves us with two questions the community can “answer”: a) do we “buy” the official answers and b) do we still support Fairphone even if we don’t like some of the “issues”.

About feeling betrayed or not I’m with Agno: if you think they made the promise of “it will be the last model we will produce, the definitive” I can understand that you are disappointed. But I’m quite sure they never promised that.

I seem to be the only person who has liked your post, which is a shame but I think understandable. I bought a Fairphone 2 in 2018, and the ‘five year promise’ rang very hollow to me when the bottom module was abandoned last year. It would have sounded even more hollow to someone who bought the phone in 2019.

I cannot find ‘the last model … the definitive’ quote anywhere and struggle to believe it could have been written in regards of a smartphone with a vulnerable operating system. My parents have mobile phones from pre 2010 which are still working and usable, but they are not smartphones. (Ironically they are much more sustainable than ANY Fairphone that is a smartphone that will ever be produced!)

I feel that the outcry over the bottom module fiasco (and it is nothing less than that, and is something Fairphone should be ashamed of) has resulted in the ‘5 year warranty for orders received before 31.12.2022’ for Fairphone 4 statement. Now that is honest, that is a mark in the sand, and something potential purchasers can hold Fairphone to and should do.

I feel your pain, but we are where we are.

I bought a Fairphone 2 in 2018, and the ‘five year promise’ rang very hollow to me when the bottom module was abandoned last year

Was there really a five year promise for hardware replacements for the FP2 in 2018 ??

No, but ‘products are supported for five years’. And yes I mean FP2 and NOT FP3.

What worries me is that on 1st January 2023 Fairphone will drop the ‘warranty for five years’ and say something like ‘products are supported for five years’, so anyone buying a FP4 from 01.01.23 will not have clear direction of the support for their model.

If the advert for a FP2 when I bought it had said ‘functionality guaranteed until 2020; two year warranty on purchase’, I would not have bought the phone in 2018, because I did not want a two year phone!

then it runs down. 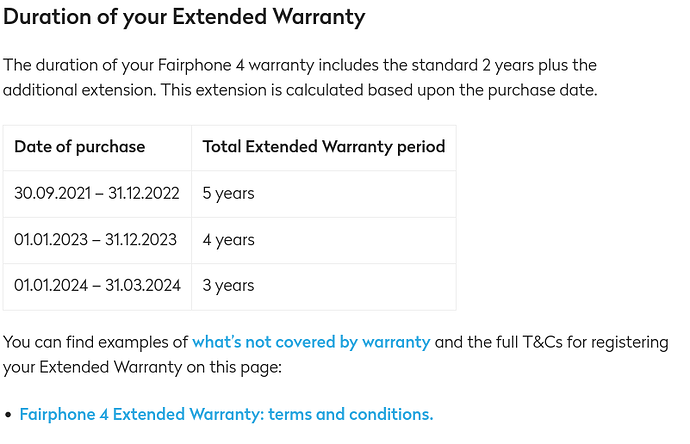 It is 5 years from launch date. If you buy a smartphone 3 years after it was released, you cannot expect the same lifetime (e.g. 5 years) for it as someone who bought it on release. That’s also why smartphones becoming cheaper after release is not really a good deal and why you are better off buying it at release.

It is 5 years from launch date.

??? If you look at the figures you can get 5 years from 15 months after the launch date and that is just the warranty.

If you are thinking about support I ‘imagine’ it’s longer and probably 5 year after the last sale. If that is 2 years and three months after the launch date is warranty still for 3 years and I expect software support and spare parts for another couple of years.

I’m pretty sure I’m not dreaming.

In phone-world, guaranteed support period is always from the launch date. I wouldn’t bet on it being otherwise.
Sometimes it’s actually from the date of the SoC chip launch, to the date when the chipmaker drops support, but Fairphone seems to have gotten the capability to go beyond that.

As an aside, looking at the table in my previous post, I’d expect Fairphone 4 sales to stop at the end of March 2024 at the lastest. Could be earlier, given experience with Fairphone 3 (not 3+), which would imply sales of the 4 will stop around 2023 . So the support period remaining should be quite good.

which would imply sales of the 4 will stop around 2023

Have you got a bit of text wrong the above seem to conflict?

The former estimate is based off the warranty table, the last date stated there is March 2024. I wouldn’t think they’d sell the fairphone 4 past that.

But this is all barely-grounded speculation, I should stop.

Well you can support (or ‘support’) all you want, if Qcomm decides to stop supporting the hardware, you’re hosed.

Hi I don’t know what you are referring to.

The post you replied to is was me querying what another poster has said about when they think Fairphone 4 sales will stop ??

If Qualcomm decides to stop support for the SD 750G, then you may want to support with all your

, it isn’t possible anymore to support all the chips which run their own specific proprietary firmware. Unless you resort to very advanced stuff like using InternalBlue to patch the Bluetooth stack. This is an exception to the rule though, and requires very specific expertise though, which is realistically not available at Fairphone the company.

Edit: given your post at Why did Fairphone use an outdated SoC for the FP4 even though they knew Qualcomm would not support it longer? - #9 by amoun I can safely state you are unaware of these issues.

SD 750G, then you may want to support with all your

Ha! are you questioning my love, there’s not enough of that for sure and why would you think I care about a SoC?

It’s true that I am “unaware of these issues.” those that you and others seem to have in mind.

I’m trying to establish what, in the ‘real’ world that most people who use phones live in, problem is anticipated.

I don’t know anyone without a mobile phone and I’ve had one since 1996 and I’ve never come across a problem, let alone one co-incident with a firmware security issue.

More relevant I’ve never met anyone who has.

But more importantly to me, is why you post a rather disparaging way about my love.

I was talking about Fairphone the company wanting to support their product passionately.

As for you not knowing anyone who […] has it ever occurred to you the reason might by because you are misinformed?