Just upgraded, and now my SD card is corrupted. I tried removing and reinserting, but no luck. It was / is encrypted. Any ideas? I’d rather not reformat if I can avoid.

Access to apps on sd card not possible with android 6 Android 6.0

I get the exact same error. (Never rooted the phone or tried any other funny things)

Not sure what to do.

Edit/Update: Fourth time is a charm. The update worked. Not sure what I did differently. Everything seems to be fine. Proximity sensor. Apps.

Hi,
Thank you for keeping our phones updated!
Just one little issue: I “lost” the SMS/MMS app when I updated to Android 6. Which one was installed before? Android Messages by Google Inc.? Which one would you recommend?

I upgraded and now the ‘All apps’ or ‘favorites’ or ‘most used’ or however the widget is called is gone … where do I find that stuff now?

Upgraded to 2017.04.08 early, last week or so via the then-updated updater from the google play store. Went fine.

Ever since, the google play store app, in settings, shows that the device is of uncertified state or something. Is this to stay? People were talking about it I think hinting that this would become into certified state once the real final release of Android6 was to ship as official upgrade. 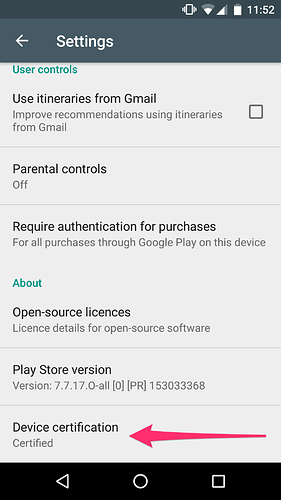