"And then I saw they had a Fairphone..."

I’m in the train and suddenly I heard the Fairphone ringtone! First I thought it was my own phone but the screen was black and then I realised it was the woman behind me with a Fairphone haha. She was calling the whole time and just left the train so I was not able to talk to her unfortunately.

The train is a good place for FP spotting: I saw a woman with a FP2 today! I recognized it immediately because of the red slim cover. Her screen was scattered though but I assume she knows it’s really easy to replace it.

Three posts in a row, but I saw another Fairphone in the train last weekend! The woman who it belonged to looked a bit suspicious at me because I was staring at her phone so much so I didn’t dare to talk to her haha

Are you passing by Jollemanhof on your way to work or why do you see so many Fairphoners?

Haha no I don’t think any of these people were Fairphone employees. But I wouldn’t be surprised if Fairphone-owners use the public transport more on average than people with non-fairphones

As a physician working in a forensic psychiatry clinic, I frequently accompany my patients to formal hearings, that is, a judge comes in to assess the progress made by the patient. One judge saw my FP2 on the table and commented: “Oh, another Fairphoner? You ought to try the new back panel.” I commented that I was already on my second flexible back, because the first one ripped at the volume button, but the sturdier replacements were more expensive. He said the higher price was worth it, and he was right.
It is good to meet fellow Fairphoners and share advice.

Are there as many as two havens in Scotland? I’m still trying to find out if the one in Forres is still active.

Aside from EFCT18, the only time I have seen someone with a Fairphone was at a London Green Drinks meetup in late 2015, before I got one myself.

Since acquiring my FP2 and moving to Leamington Spa I have identified another user in my town. I spotted her Phone Co-op email address during an exchange on the LETS newsgroup and asked her if she had a Fairphone; she said yes and I asked her how she was getting on with it, but she never replied to that.

I’ve attended the Phone Co-op AGM once but didn’t spot any Fairphones there.

Apparently there was someone in my local Green Party who had a Fairphone but gave it up for an iPhone. What is the matter with people??

Are there as many as two havens in Scotland?

No, the second one was Northengland

Since acquiring my FP2 and moving to Leamington Spa I have identified another user in my town. I spotted her Phone Co-op email address during an exchange on the LETS newsgroup and asked her if she had a Fairphone; she said yes and I asked her how she was getting on with it, but she never replied to that.

Correction - the Fairphone user in Leamington is involved with Community Energy Warwickshire, not LETS. There is a Phone Co-op account holder in the LETS circle but, in her own words, “I haven’t ventured into Fairphone territory yet.”

I’m in a packed tram right now and there is at least one other Fairphoner in here. I wonder where they are all going…

I just met a Fairphoner in my GP’s waiting room. His FP2 was equipped with a (cracked) transparent slim case, so I told him he can get an opaque slim case for free. We didn’t have a long time to chat (an older lady complained I was too loud

), but he got to tell me of two other Fairphoners amongst friends & family. Of course, I had to tell him of our quarterly Stammtisch meetups in Aachen and our upcoming movie showing.

He was called upon before me, so I’m glad I was shameless enough to push my Fairphone card (just a Fairphone sticker with my name & email address handwritten on its back) on him in time.

Again, I spotted a FP in the train, but this time very far away from Amsterdam ;). This morning I sat in the train from Lyon to Marseille next to a Frenchman with a Fairphone! We had a very short conversation about it as he was clearly busy but it was a nice coincidence to see a Fairphone so far from home :).

Yesterday I was at the Klimakirtag in Vienna with Greta Thunberg and saw one Fairphone and one Shiftphone in the crowd.

I see Fairphones all the time because I only befriend people, who have a Fairphone… Just kidding, of course.

Indeed, I took a discipleship course with two friends, who both own a Fairphone 2, but one of the other course participants also had a FP2. So from ~20 participants 4 in total had a Fairphone (20%). Nice average.

I started this topic over 4 years ago and it’s very nice to read through the stories. Hope there will be many more, now with all three FPs. (thanks @urs_lesse for opening it again)

A friend sent me a picture the other day and wrote: “Got a package from the Netherlands”. The picture showed the package of the FP3.
I replied to him and asked why he has chosen a Fairphone and he mentioned that he remembered me talking about it. He needed a new company phone and so he ordered the FP3. His boss by the way was happy that it was a cheap buy compared to others.
Bielefeld #heaven is growing =)

… and then all of a sudden you get a first-ever Telegram message from a neighbour across the yard who asks you if you could give any advice, he’s considering buying a Fairphone 3. He read not just the sign of the times, but also the sign(s) opposite to his window. 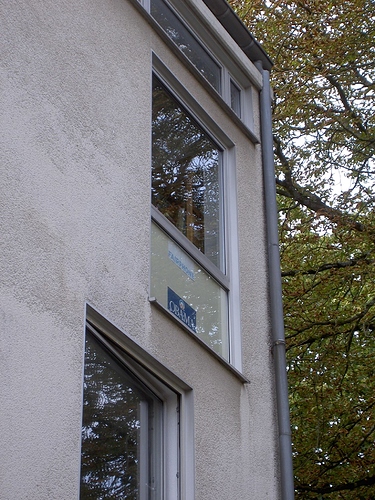