Try Raccoon. It think it’s pretty much the same thing most of this services run in the background anyway. But the website is also well written so you can learn something about the details as well.

Update/Disclaimer: I see all this as a last resort to download “free” apps someone really needs.

The best and most secure way to get and app is through the developer’s website. Many developers offers direct download or purchase (in case of commercial apps) of their apps. An example of commercial apps you can buy out of the play store is the very good aqua mail, or sygic navigation.

Moreover in this way you give 100% of your support to the developer and are not forced to pay the obscene 30% google tax.

I would never ever trust any online apk downloader which may temper legit apps including malware and the likes. If you want to go that way, use a pc installed apk downloader like GooglePlayDownloader for linux (which is an open source application and therefore you can trust it’s not doing anything evil).

Lastly, as may already said, F-Droid is an excellent source of free and legit apps.

Remember that going away from Google gave you may advantages, but weakened a bit your mobile phone security. If you know what you’re doing there’ll be no problems, but you must be a bit more careful about what to install and trust.

Do you have to have F-droid? I use VLC on my FP2 and it does not show up on the lockscreen.

I see your problem was solved in this topic. For completeness sake I will leave the answer, I had written before I found out:

F-Droid is an appstore like Google Play. VLC is a music player you can download from within F-Droid. Or you go to their mirror (be careful with x86 vs arm7!). So F-Droid is not required to use VLC.

Why is this topic in #software:fp1-android-4-2?

There is this other topic for FP2:

I think it’s good to have separate topics for FP1 and FP2 because users face different challenges (FP1 comes Google-free and pre-rooted).

Did anyone ever use this app? It seems very convenient for installing apps from the google play store without the play store itself…

And do you know if you can download payed app with this?

Or is there any possibilities to get the app I payed on Playstore on FPOSOS/FROGS ?

I don’t think, but it works with Racoon if you bought the app before.

Amazon are, if anything, even worse than Google, who are at least honest about being evil! But by far the worst company I’ve come across was Apple. They may have cleaned their act up by now but in the early days of Itunes their T&Cs terrified the life out of me and I haven’t touched any Apple programs since. I’m not even certain if this is applicable here. Is Itunes available on Android?

Is Itunes available on Android?

Is Itunes available on Android?

No, thank God it isn’t!!! I’m so glad I can just plug in my Fairphone to my PC and drag and drop files without installing any additional software!!!

Yes, I rather overdid that when I first got my 'phone. I had to add extra memory!

Many thanks for all these tipps and hints - very useful! I just installed FP Open OS, and F-Droid and Evozi APK Downloader then are a must!

I’ve being trying APKPure App as an alternative app store (for free apps only) for a few days. Works well so far, no account needed, it also manages apps updates.

For the friends of the two-factor-authentication, there is the OTP Authenticator (F-Droid), which - if need be - is also compatible with the “Google Authenticator” (Wikipedia).

I’m trying to set up DavDroid on my father’s FP1. F-Droid won’t let me install. I guess it is the Android version. Can I install an older version? Where would I get that?
Ist there another open app to sync with iCloud?

Minimal SDK version (= Android version) for DAVdroid is 14, which corresponds to Android 4.0.1 Ice Cream Sandwich. So it’s not the Android version, should be another thing.

(If it’s F-Droid what you are trying to install, F-Droid itself shows “2.3.3 or greater” compatibility)

What says the error message?

He has Android 4.2.2 and everything up to date (according to the updater) and no Google installed. If I look for DavDroid - I don’t see the correct icon, just a grey F-Droid icon. 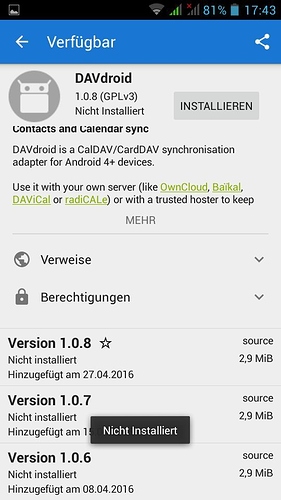 Has F-Droid internet connection? Can you download any other app or update repos?

Also, reinstall F-Droid from the webpage, maybe the installed version is an alpha one and it’s full of bugs (I’ve suffered that, non-stable F-Droid versions are really unstable)