Seems to be back to normal! Thank you so much for your fast help!

Thanks! I had the same issue and got a bit stressed, but it worked for me as well!

My fp2 was unresponsive when twrp was active, but after i removed the battery and reinserted, it booted normally.

After the update I’ve got the same message “no OS installed. Reboot anyway?” I did so, but now it is stuck at the first screen when you switch it on, on which it says “Fairphone Powered by android”. Tried to press the on/off button to reboot, which it did, but was still stuck on that first screen. Took battery out and in again and tried again, but it is still stuck on very first screen.

Do you have any more recommendations?

I updated my phone normally through the app. Removed SD card and tried again, but still does not go further than very first screen.

If rebooting does not bring you back to a working phone (allowing you to download again), try a manual install of the OS: https://support.fairphone.com/hc/en-us/articles/207914363-Manually-install-Fairphone-OS-for-the-Fairphone-2

Is there any other way?

My computer can’t handle the size of the ZIP folder. Also, my phone still stays in the first screen even after starting it in fastboot mode. I see nothing ever else than the first screen.
I tried to connect anyway to my computer (only after I realized I cannot extract the files, because this PC has not enough space - Can’t free that much space), but it does not recognize the FP2…

… This is a nightmare really D:

Oh, now a blue light blinks in the upper left corner… That’s all the change.

Also, my phone still stays in the first screen even after starting it in fastboot mode.

There’s not much more to fastboot mode than the Fairphone logo … ok, with the current firmware it additionally vibrates a few times and the LED flashes blue to indicate fastboot mode.

My computer can’t handle the size of the ZIP folder.

USB stick or some other external storage to the rescue?

Thank you for your efforts despite my slightly panicky mood!

I fixed it, but with a different attempt. Not fastboot was necessary, but recovery mode.

Then in ‘Cache’ I found the update and could install again. Then it restarted fine, even if it took a while longer.

Thanks anyway. Happy to not need to do it manually

Hi, thanks for all your explanation, but I’am totally lost because I am a huge loser with computer and English. I’ve pressed the button reboot, and now my fairephone is stucked with the blue light on the left upper corner blinking… should I wait? I am totally lost… ;( Thanks a lot for your help…

Had exactly the same issue, thanks for your solution.

and now my fairephone is stucked with the blue light on the left upper corner blinking… should I wait?

No. There’s nothing more coming.
This is called fastboot mode. You can do something with that, e.g. …

hi everyone,
No luck for me.
The phone doesn’t wanna leave the TWRP mode.
I did download the update file on my PC, but as I try to run it, the Phone will not connect to the PC…

Yes I did start the phone in the boatloader, by holding the volume down bottom and start bottom together, and yes, it turns on the screen with just Fairphone black screen, but no, it doesn’t show up on the PC (windows 7 OS).

Really annoying by the way.
Thanks

this is the link that I followed for the instructions

You could consult one of the #fairphoneangels if there is one located near you, but your post history suggests there probably is none

Did your phone previously connect to the computer or does it have a problem with the cable / bottom module?

it doesn’t show up on the PC

Where does it say the phone has to show up?

What does happen if you execute the update script?

that’s what it says 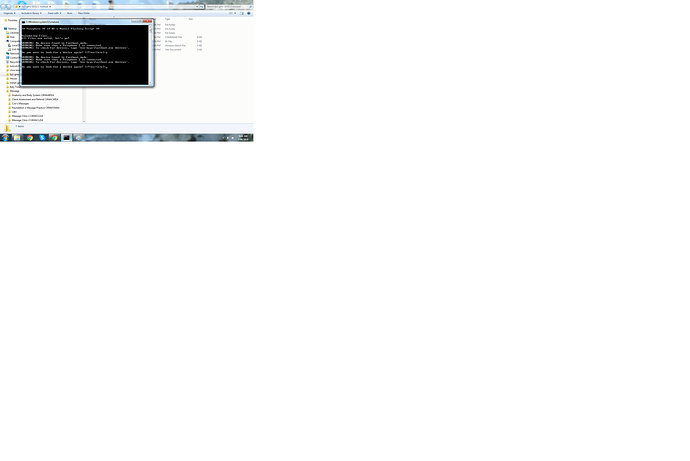 Yes, it did always connected to the PC. I tried different cables, but no luck.

Did you get a blue light indicating fastboot mode?