A family of 4 and their Fairphones

I thought I’d share my experiences of Fairphone with my family.

To start with there is me, the Dad. I work in computers and can happily build things. I wanted a Fairphone 4 so I could repair it. The cost was high, but I’m lucky I can afford it. I usually get high-end phones but was willing to sacrifice things like waterproof-ness to having something I could maintain. Sadly my order from the Fairphone website took about 4 months to get here and I got taxed twice over so I’m still chasing a refund. I’ve got the phone working nicely and am enjoying not having a stupid round edged screen. I like the fingerprint reader on the side which I can use without picking up the phone. The battery life is astonishing, I’m rarely below 50%. Transferring my stuff from a Samsung Galaxy Note 8 went sorta OK, but I had to set up a lot of things manually.

Then there’s the 14 year old son. He’s into gaming and seeks out his own GPU and builds his own desk. He wanted a new phone because his old one was getting unbearable. He was ambivalent about getting a Fairphone - I think he might have liked something more flashy. However, he did a great job moving his stuff over and was back living his best life very quickly. He likes the power of the Fairphone 4 and is able to do things like editing video clips that he’s used to doing. He does find the missing apps, such as “Gallery” a bit frustrating but he’s generally very good at installing apps he needs. He doesn’t seem to be bothered it’s a bit bigger than his old phone and he does get a bit of a kick from opening the back and being able to show his friends the internals.

Then there’s the Mum. She doesn’t use her phone much, just a bit of Lemmings, pairing with a smartwatch and mostly chatting to her friends. After a considerable amount of pressure and testing she concluded the Fairphone 4 was too big. When her new Samsung arrived it was the same size which was a bit galling. However, as she says, it’s quite a bit thinner which makes a difference for her feeling safe holding it. The transfer between the Samsungs went about as badly as mine to the Fairphone and she was a bit cross that I forced her to get a new phone. It’s only got two years of security updates but was one-third the cost of a Fairphone.

Then there’s the 17 year old daughter. She’s into STEM and sustainability. She’s somewhat keen to get a Fairphone 4, but she’d like a grey one and she’d like to put it in a nice flip-case. At the moment I can only buy green ones that are 8GB-RAM versions in the UK. We want the more powerful one so it lasts longer. This is probably the last phone I’ll buy for her. Her existing phone is a bit broken, and it should be going to her Nan, but we’re holding out for a grey one. I can’t risk ordering it from Holland because I expect I’ll get taxed double again and I have enough other nonsense in my life without chasing another refund. We’re struggling to find flip-cases so far, they seem to be about 70GBP which she thinks is silly partly because she earns money from a job plus an Etsy business and she thinks how long it would take to earn that much money.

You may be wondering what on Earth we’re doing replacing all these devices. Sadly the answer is that all the old ones have no more security updates. We held out for the Fairphone 4 and kept running the phones we couldn’t really trust. That’s been awkward because we each use the devices for things that matter, such as banking, flight tickets and COVID passes.

Great that you support Fairphone. But you could also put alternative ROMS on your old phones to keep them secure and sustainable… Just an idea (LineageOS and /e/ OS, etc…)
Thanks for sharing!

At the moment I can only buy green ones that are 8GB-RAM versions in the UK.

That is the maximum RAM you can get ?? The only alternatives are grey ones with 6GB-RAM ??

"At the moment I can only buy green grey ones that are 8 6GB-RAM versions in the UK.

I’d love to do that @BrFabian - I already run things like Fedora elsewhere.

Unfortunately I don’t have the free time to chase all the issues doing that at the moment. As much as I’d love to be optimistic about the chances of it going smoothly, we all know there are problems which consume our time getting these things running smoothly.

If I’m honest, the cracks in the phone screens are also another reason they are being replaced. I’m hoping I can repair the Fairphones myself if they get cracked (although note the comment about cases).

When things get calmer here I’m hoping to swap the OS on my phone.

"At the moment I can only buy green grey ones that are 8 6GB-RAM versions in the UK.

You’re right @amoun I should have been clearer.

BTW my son’s green 8GB arrived very quickly from the Co-op phone supplier in the UK.

It’s only got two years of security updates but was one-third the cost of a Fairphone.

What do you mean? Basically all new Samsung phones are supposed to get at least 4 years of security updates, with flagships even getting 5 years. Fairphone is still miles ahead, but Samsung definitely isn’t doing badly in this regard.

We’re struggling to find flip-cases so far, they seem to be about 70GBP which she thinks is silly partly because she earns money from a job plus an Etsy business and she thinks how long it would take to earn that much money.

You might consider 3D printing a bumper case and then taping it inside some universal flip case:
https://www.prusaprinters.org/cs/search/all?q=fairphone%204

Download files and build them with your 3D printer, laser cutter, or CNC. Thingiverse is a universe of things.

I just customized a case for a different type phone with similar dimensions and camera positions, ripped out the plastic holder and stuck the Fairphone casing in it’s place with double sided sticky tape [IMG_20211208_160733] It works.

Not quite possible, as the 6GB version is only available in grey.

I can’t get the 8GB one in grey 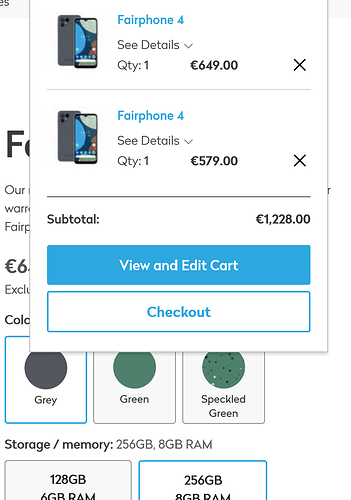 True, but the 8GB also exists in grey. Probably just that the shipping times for all of them except speckled green are 8 weeks currently.

It was also security updates and longer software support that mostly drove me to Fairphone. Just got totally fed up with the absolute rip-off situation from other manufacturers where the hardware is fine but after two years ‘no more software updates, sorry, buy a new phone’. That should be absolutely illegal.

Being able to swap out modular components and to change the battery quickly and easily was also a big factor in my decision to go to a Fairphone.

True, but the 8GB also exists in grey. Probably just that the shipping times for all of them except speckled green are 8 weeks currently.

Thanks @Alex.A . It is great that it exists, but I’m in the UK and I’m still trying to get the refund from being double-taxed from my order on the Fairphone site. You lovely Europeans are so lucky to avoid this.

Not quite possible, as the 6GB version is only available in grey.

Very true @Alex.A - I made a mistake there.

all new Samsung phones are supposed to get at least 4 years of security updates, with flagships even getting 5 years

@Razem that would be wonderful.

I see the wording says:

And select devices launched in 2019 or later will be supported with firmware security updates for a minimum of four (4) years following their global launch, while select newer devices will receive up to five (5) years of security updates.1

So perhaps the word “select” is causing confusion. Samsung should make it clearer that they are actually doing so she can find the information on the product page. Without being transparent they will lose sales (but perhaps only a very few).

My wife investigated and found the A22 was 2 years and the slightly more expensive phones were 3 years. She probably saw things like this:

Like most lower mid-range Galaxy A series devices, the Galaxy A22 should get two major Android OS updates and at least two years of regular security updates.

My daughter’s Note 8 from 2018-04-11 had it’s last security update on 2021-08-21 so she only got just over three years updates. I understand it would be more on a flagship device these days. It’s also awkward that the policy is based on when the launch of the device was which means a newly purchased device doesn’t have the full support unless you buy it on the day of launch.

Fairphone are wording it slightly differently, but there is still a part related to when you buy it:

We don’t just promise long-term support, software updates and friendly customer service. We have it in writing: A 5-year warranty for every Fairphone 4*.
*When you purchase before 31/12/2022

So perhaps the word “select” is causing confusion. Samsung should make it clearer that they are actually doing so she can find the information on the product page. Without being transparent they will lose sales (but perhaps only a very few).

Yeah, the wording is weird, but this practically applies to the whole A & M series. So A22 should get 2 major OS updates (up to Android 13) + additional 2 years of security updates (at least until July 2025). My wife has A40, which is already almost 3 years old, and it still receives updates. (Support should end in April 2023. But the phone is still fine, so I’ll try installing some custom ROM then.)

My wife has bought a really nice leather flip case for her FP3+ from this girl in The Netherlands.
See https://annatreurniet.nl/ She alse has FP4 flip cases. Look at the shop…

This has been asked before and you may, if you search find many reasons.

My resoning is that this is the only phone ‘manufacturer’ that has seriously invested in the welfare of those that do the manual labour, i.e. miners and assemblers in factories.

Thanks for the pointer @Rutger_ES - they do look nice.