I just received my 2nd hand Fairphone 1 and I really like it!
After a factory reset the software works flawlessly. Though the support for FP1 is stopped, I saw that the Android 4.4 update alpha-version is still available on the website. I understand that this is an Alpha release so everything doesn’t work as it should but I would like to know if there are FP1 users that use the 4.4 FP1 software as daily driver. I saw on the forum post that there may be some issues in dialer app for example. Are these bugs annoying or make those the FP1 barely usable? I would like to know your experiences. It’s not a must for me to upgrade to 4.4 but it would be nice.

I’ve been using the alpha builds for almost 1.5 years now. The only annoyance in my opinion is the battery stats problem, and sometimes a battery drain from GPS not turning off properly.

Other than that it works flawlessly for me.

same here. No random reboot, no hanging phone. GPS is working alright. Bluetooth pairs with my car radio. Still the first battery, but for my use it is ok (just turn off everything I don’t need) and I survive two days without recharging. But, I don’t have google nor instant messagers. 4.4 has been the best release ever, for me.

On what security patch level resides 4.4 Alpha? I’m asking because my spouse is on the unofficial 4.4 from @chrmhoffmann, which, unfortunately, is discontinued. 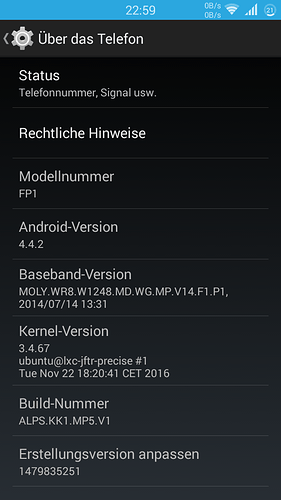 There is no security patch level in #kitkat (I think it was introduced in Lollipop). The kernel is from Nov 2016 though.

So this is an advantage of half a year regarding patches, I guess/hope.

IIRC, @chrmhoffmann’s port of 4.4 does have more security patches applied than the alpha release.

You are telling us this now??? Well it probably doesn’t make much difference anymore by now.