I am still experiencing issues with connectivity

With multiple video calling services (signal, FB Messenger) I experience issues with understanding the other person. Chunks of audio are cut at times which makes calling over Wi-Fi challenging.

I’d like to know what diagnostic tools exist for troubleshooting video calling, so I can compare performance on my laptop (which does not experience these issues on the same network) with my phone in a more objective manner. A speed test is obviously not an adequate tool.

I have the latest software update on my fp3

I found the website packetlosstest.com, which seems to be okay for my purposes (for the moment I’m in Texas, so the server being in Gerogia isn’t the hugest issue). I ran three tests on both my laptop and my phone, from the same location in my parents’ house. 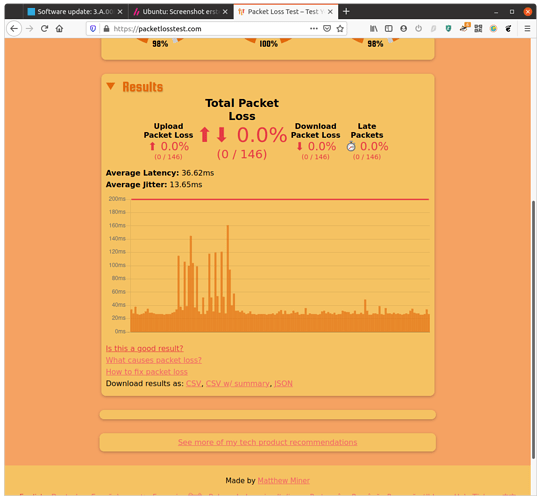 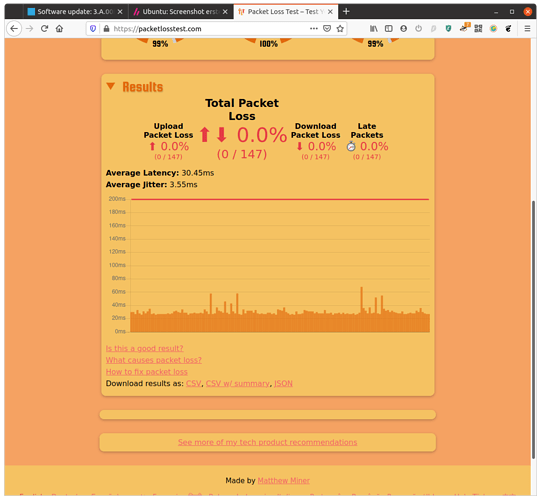 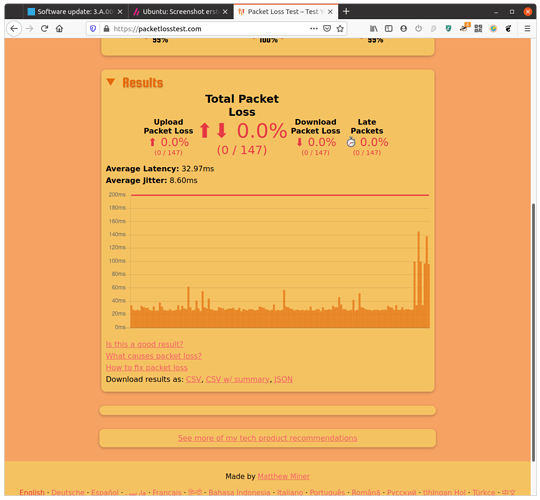 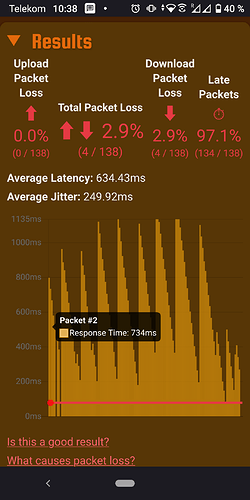 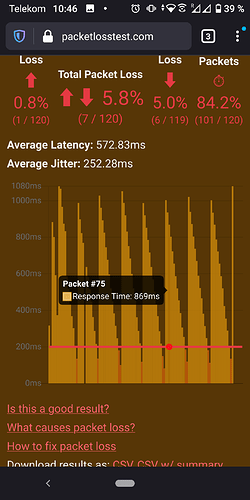 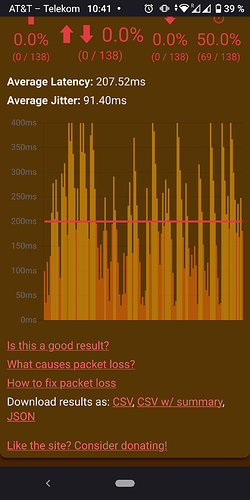 Thanks for all the info > impressive.

The difference may be that with the phone you maybe using a network not just wifi. Notice on the last of the Phone results the Network is named differently and the issue is better. Maybe you can try using wifi only and switch of the network so forcing the use of the wifi.

I have an update. It seems that the difference between my phone and laptop’s settings was the frequency band. I was on a 2.4GHz connection with my phone, and a 5GHz connection on my laptop. Changing my config settings to 5GHz immediately made the performance better on my phone.
I highly recommend using a packet loss test for network troubleshooting, especially for VOIP calls!

Edit: I had made a hasty comparison between performance. I don’t think I have enough information to say that one connection is better than the other. Suffice it to say, I’m happy to give video calling a new try! 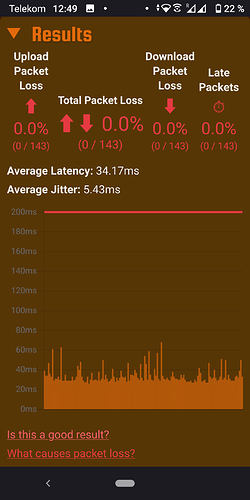 I’ve just tried the packetlosstest you linked too. On my Raspberry pie4 using Chrome (Firefox esr 75 wouldn’t work ??) it was 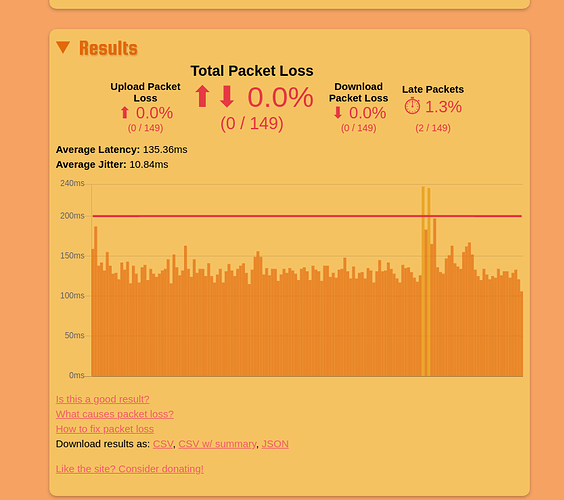 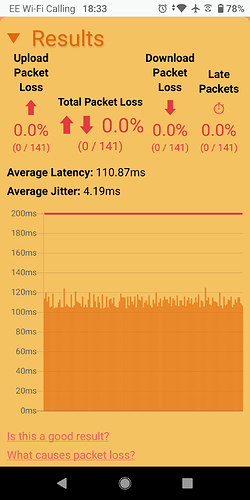 Both machines are about 16 feet from the router and as you can see I have the opposite ~ the phone is better than the computer.

Yup - I think I made too hasty of a comparison. Edited my post accordingly. Hmm, looks like this could be used for other troubleshooting, since my laptop didn’t seem to have the same issue connecting to 2,4GHz on the same network. If I find anything I’ll reach out to Fairphone. Is there a bug reporting system out for Fairphone 3? I only seem to find their old FP2 system or the support system.

Some update: I was able to partially replicate my findings, this time controlling for the channel. All three tests were done on channel 11 (2.4GHz), and I got worse performance on my smartphone. I can only verify that I’ve run into the issue on 2.4GHz, with these tests. Have not yet run into problems on 5GHz. 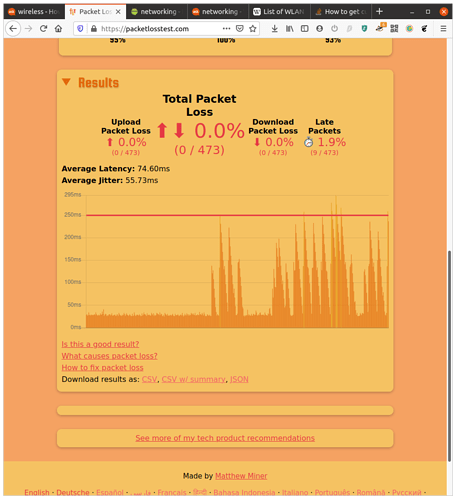 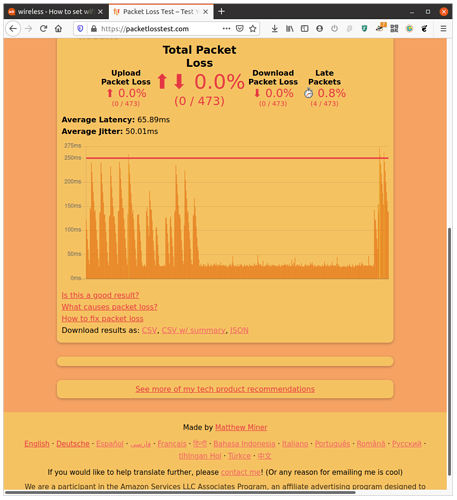 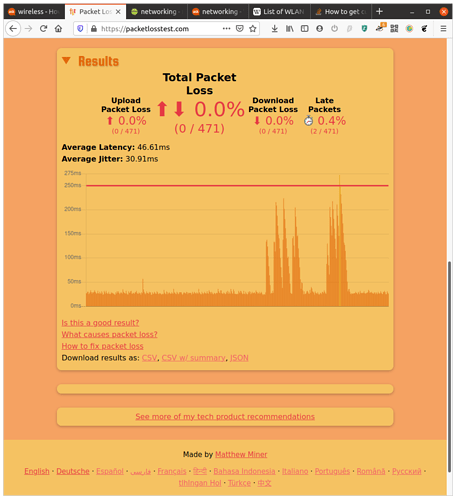 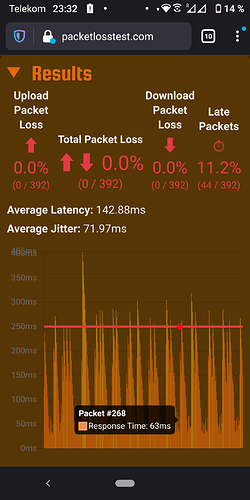 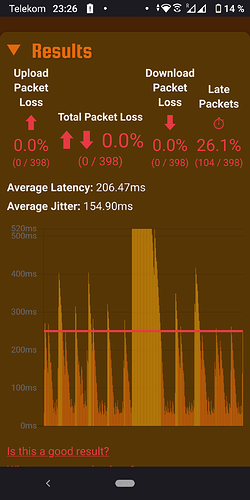 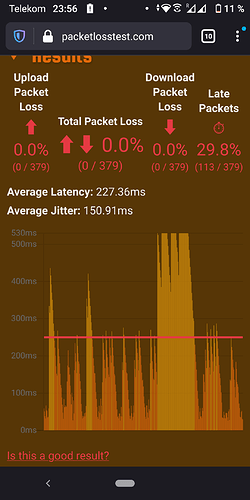 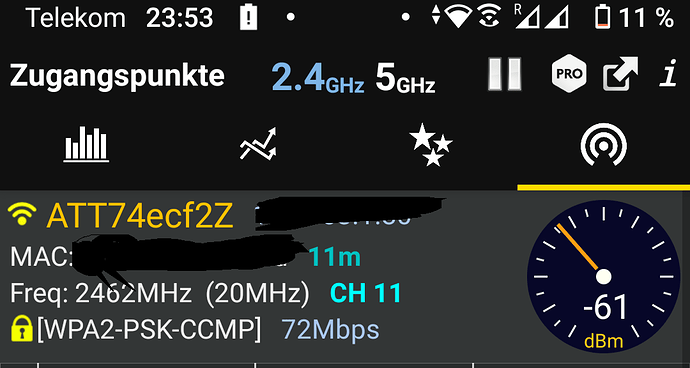 On my results above you will note the test on my raspberry pi was slightly worse than the FP3, the FP3 looked fine. Yesterday I had problems with my raspi as both the wifi and bluetooth are on the 2.4GHz band so I swapped the wifi to 5GHz. On the raspi they are both operating from the same chipset and interfere with each other.

I see from your images from the phone that the layout, format, colour is different do you know why?

Anyway if you have any bluetooth enabled nearby it will likely interfere with the 2.4Ghz wifi and hence latency maybe.

And if you have both wifi and network running on the phone how do you know which is being used as they could even swap mid stream.

Your computer no doubt uses wifi to connect whereas your phone appears to be have the network connected which may intefere and do you have the bluetooth enabled which is on the same band 2.4GHz

There are several uses of the 2.4 GHz band. Interference may occur between devices operating at 2.4 GHz. This article details the different users of the 2.4 GHz band, how they cause interference to other users and how they are prone to interference from other users. Many of the cordless telephones and baby monitors in the United States and Canada use the 2.4 GHz frequency, the same frequency at which Wi-Fi standards 802.11b, 802.11g and 802.11n operate. This can cause a significant decrease in ...

Thanks for your reply! We’ve narrowed down the source of the issue further. My computer and phone both had bluetooth on during all of the previous tests so I ran three sets of two tests each on my phone: One without bluetooth and mobile data, one with bluetooth but without mobile data, and one with mobile data but no bluetooth. The connectivity measured was wifi, and in all of the tests that I’ve run, my phone was close to my computer with bluetooth activated.
Here are the results. From the filenames you may be able to see that only the test with Bluetooth experienced those issues. Looks like on a mobile device the interference is greater than on the laptop. Because now I’ve decided to set my phone to prefer 5GHz connection, I can say that the issue is gone and troubleshooted. 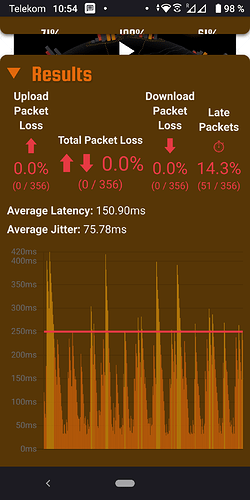 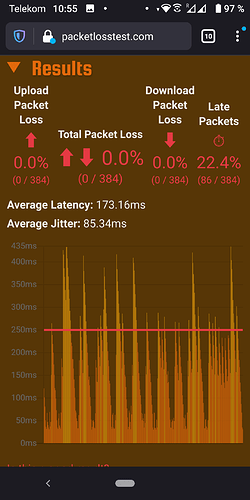 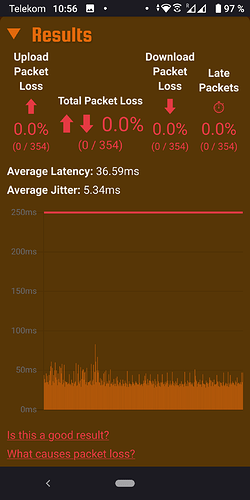 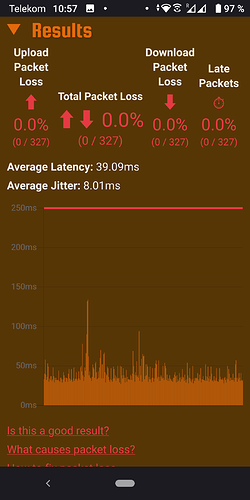 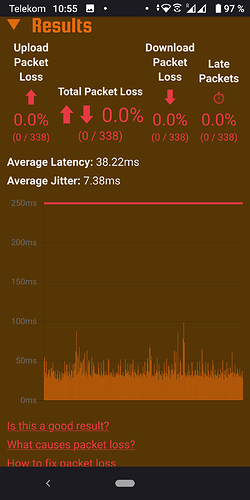 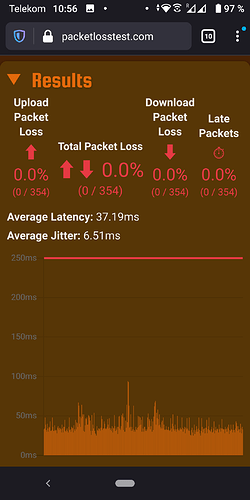 On the other note, I’m not sure why the site appears different on my phone. Even when I requested a desktop version I got the same layout. But it does help to identify which test was which easily. Also, another note: I decided to change my test settings from the default to VoIP mode since it had more packets.